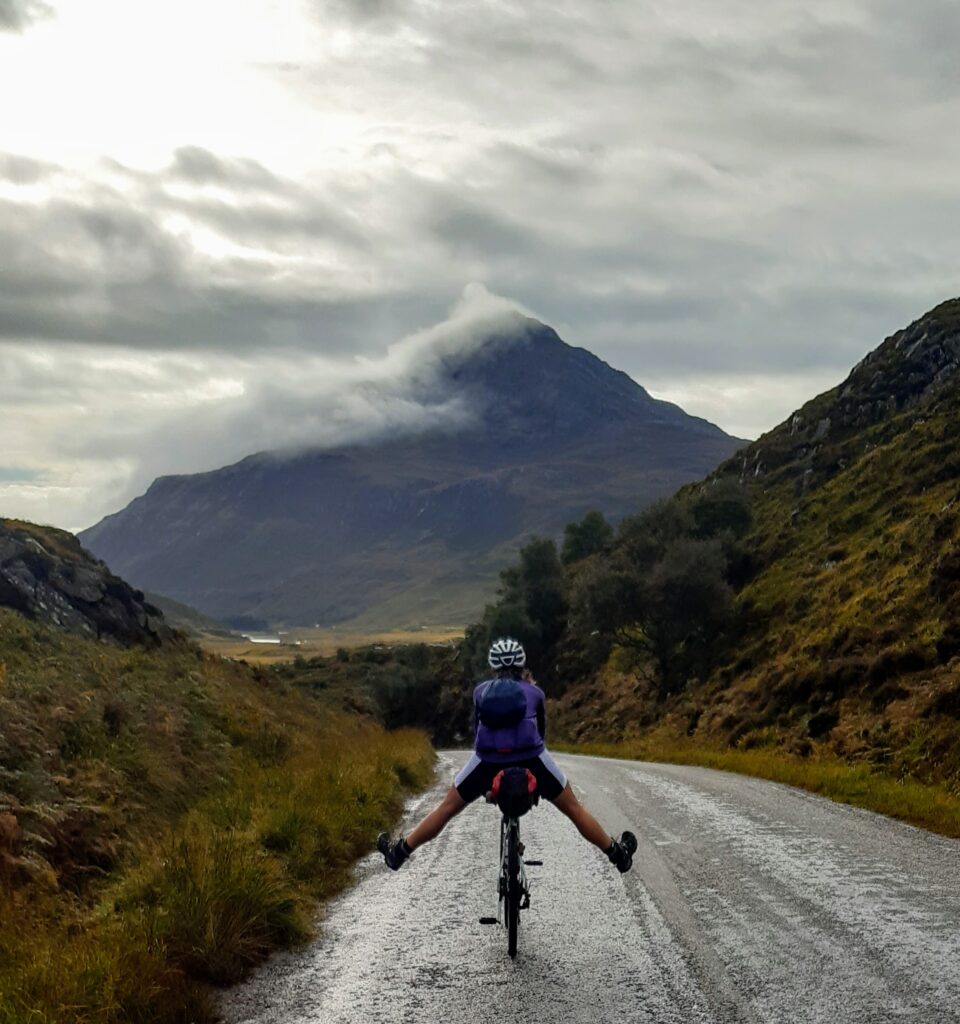 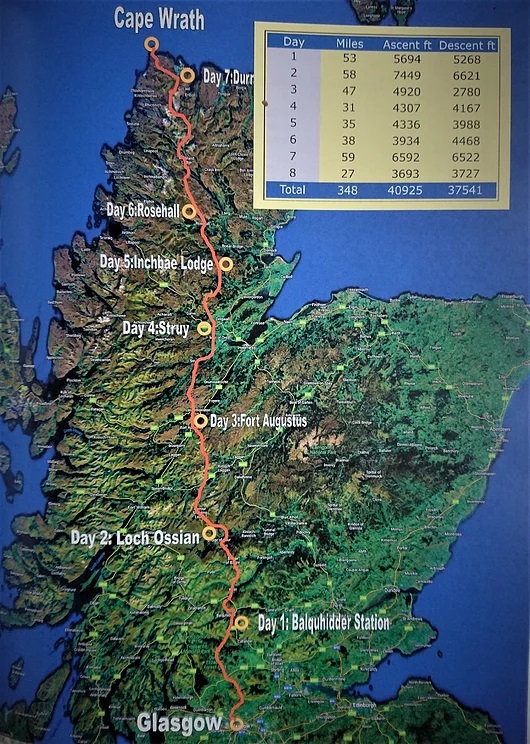 An Turas Mor Route Map (copied from their website)

So, we bought a new (used) lightweight tent (Big Agnes Fly Creek HV UL2) and decided, after staring at weather forecasts for weeks, Scotland’s An Turas Mor trail was still worth attempting in early October. We rode the Downs Overnighter to test the tent. It worked but exposed some issues with carrying it on our bikes – cue some research and a custom bag arriving very quickly from Beer Babe which holds the tent poles under my downtube and a more durable S2S Big River drybag w/ Voile straps for the tent itself. I was pretty chuffed that Beer Babe let me name the downtube bag and Hippy’s Down Under Pack is available to order here. Lots more panic buying, borrowing and packing and repacking later, we rolled in to London Euston after work on Friday, had a pint and had a very good experience getting bikes on and then off the train in Glasgow thanks to Avanti West Coast. Other UK train companies could learn a thing or three from Avanti!

Day 1: Starting at the Kelvin Park Bridge in the very centre of Glasgow the route north follows the cycle path on the banks of the Kelvin – a deep forested river gorge that hides the city and its sounds from you.  Forested muddy singletrack awaits defying the fact you are exiting a major city. Leaving the Kelvin you pick up the banks of the Allendar Water to Milngavie where the trail joins the walkers of the West Highland Way to Drymen. The trail now picks up the Rob Roy Trail through forest to Aberfoyle with its famous cyclist cafe. Onwards and upwards, to the Dukes Pass in the Queen Elizabeth Forest. This route is part of the National Cycle Route 7 which now winds it way alongside Loch Lubnaig to Strathyre.

Fry-up at the hotel cleared, we rolled away shortly after from the Kelvingrove Art Gallery and Museum 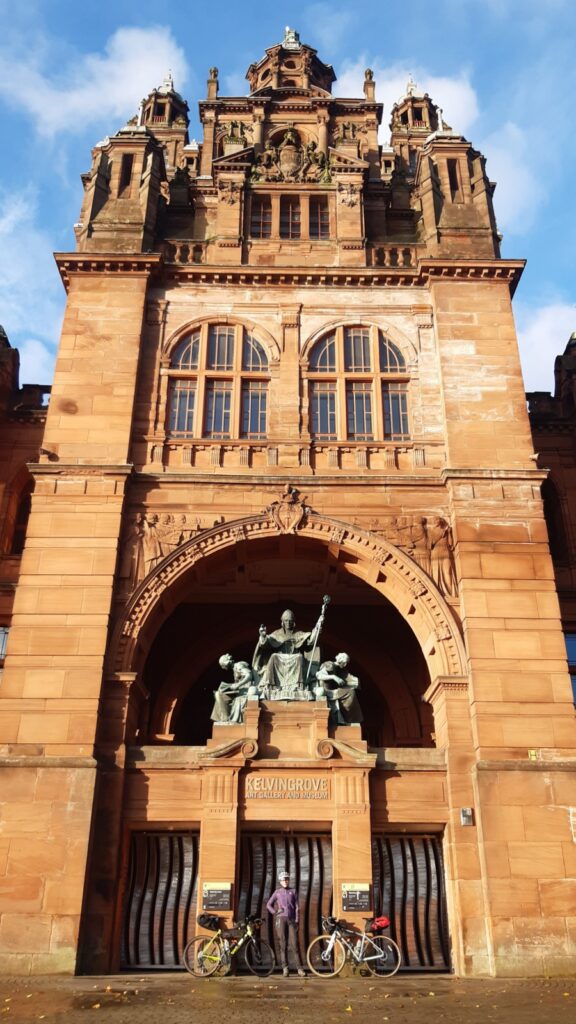 and even more shortly after we stopped again because the grrl’s (@PhilDAS) rear tyre had deflated. Yes, of course I’m starting 500km of off-road riding in the Highlands with four brand new tubeless tyre installs. 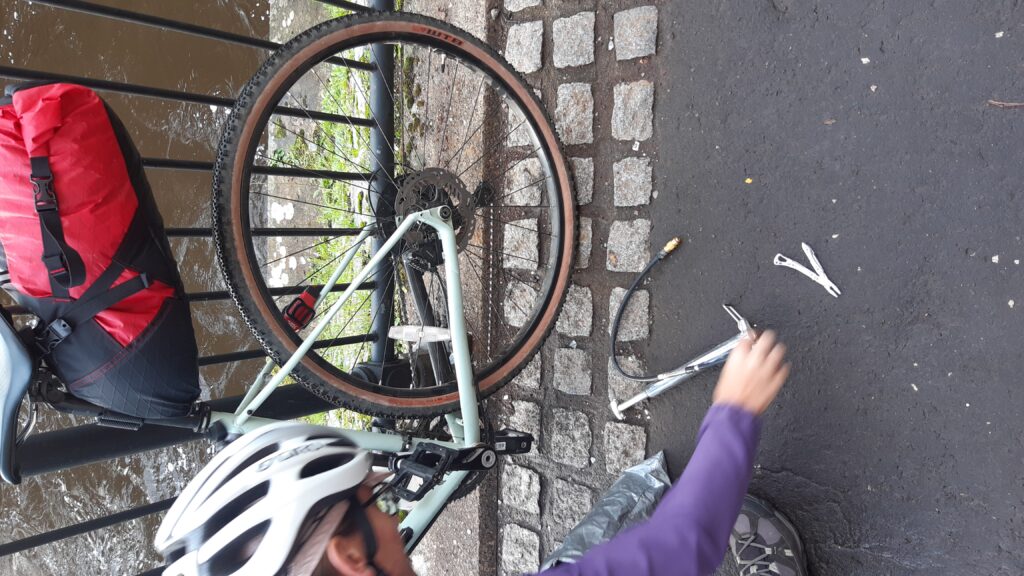 I scream obscenities at the wheel until the valve agrees that I’m right and seals and we roll away again, wondering if we’ll even make it out of Glasgow and where the nearest bike shop is. We clear Glasgow quickly and are now in stop/start boggy singletrack for a while, neither of us really stoked about anything. Some roads and some more muck and we eventually get to the 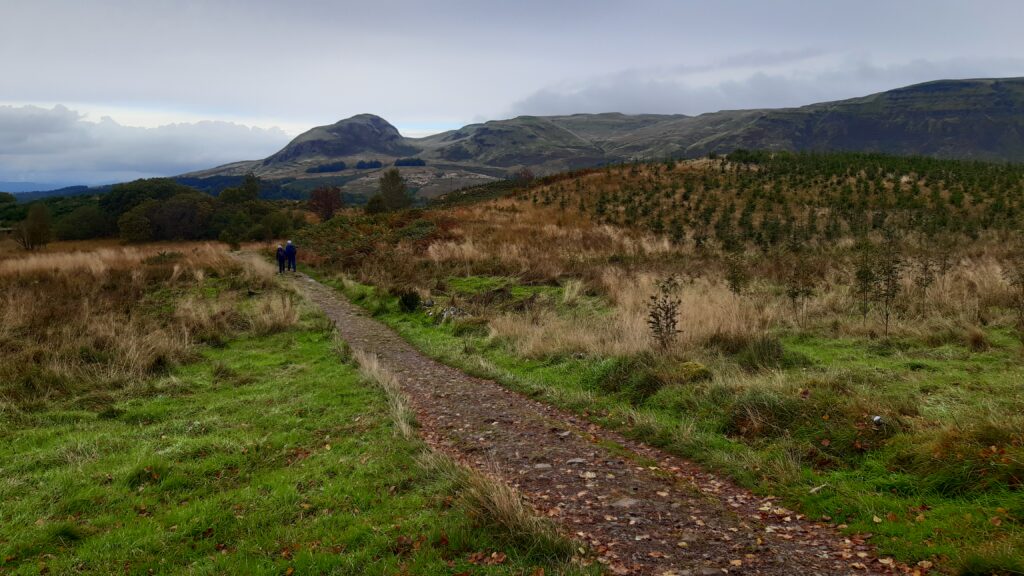 West Highland Way which is quite popular with walkers and their dogs – we “hey buddy” all of them – RIP Iohan. It starts raining as we roll into the ironically named town of Drymen. Thankfully it has a nice little bakery where we can eat cake and drink coffee while sorting our waterproof stuff out. We carry on, wet and still a bit miserable to Aberfoyle, stopping in at Macgregors for a proper lunch, more coffee and large piece of cake. Definitely worth a stop here. Then the trail heads up into forest with a fantastic waterfall. Food + pretty view = massive mood increase! 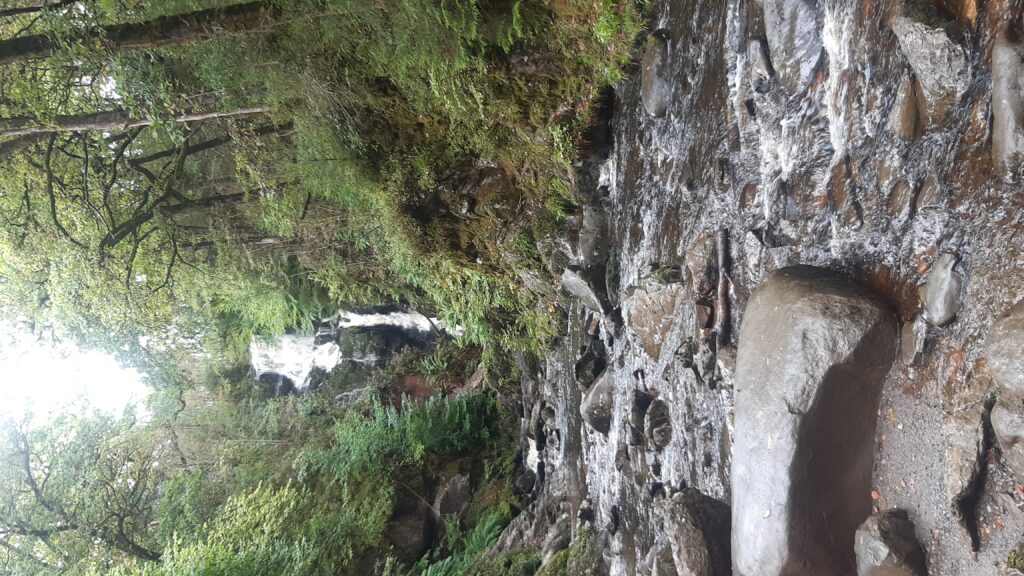 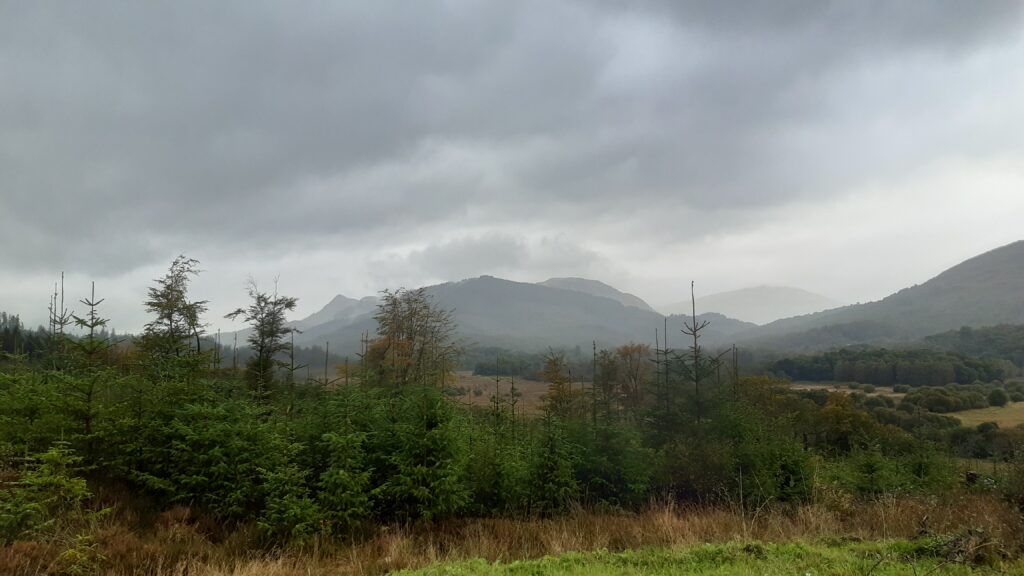 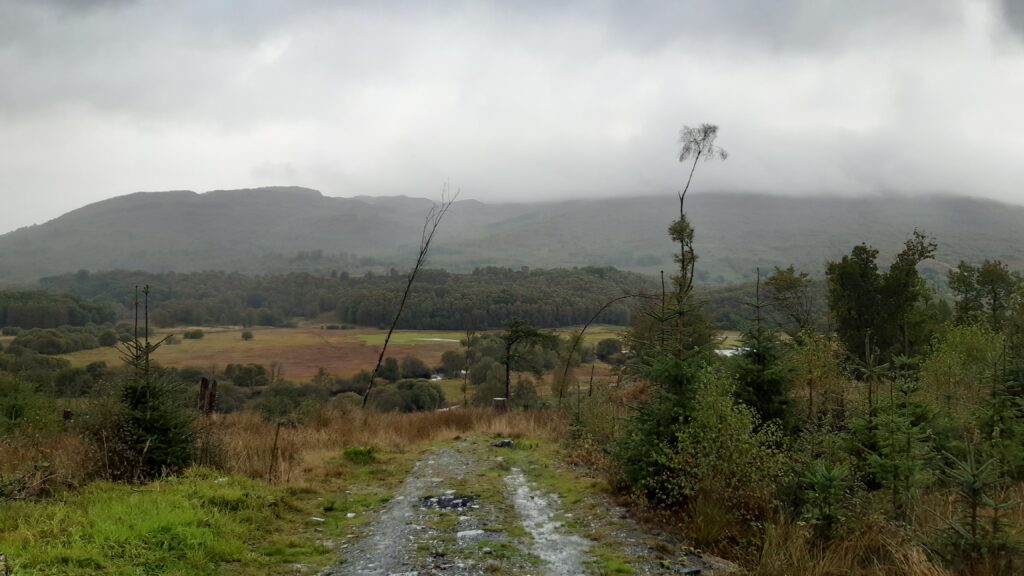 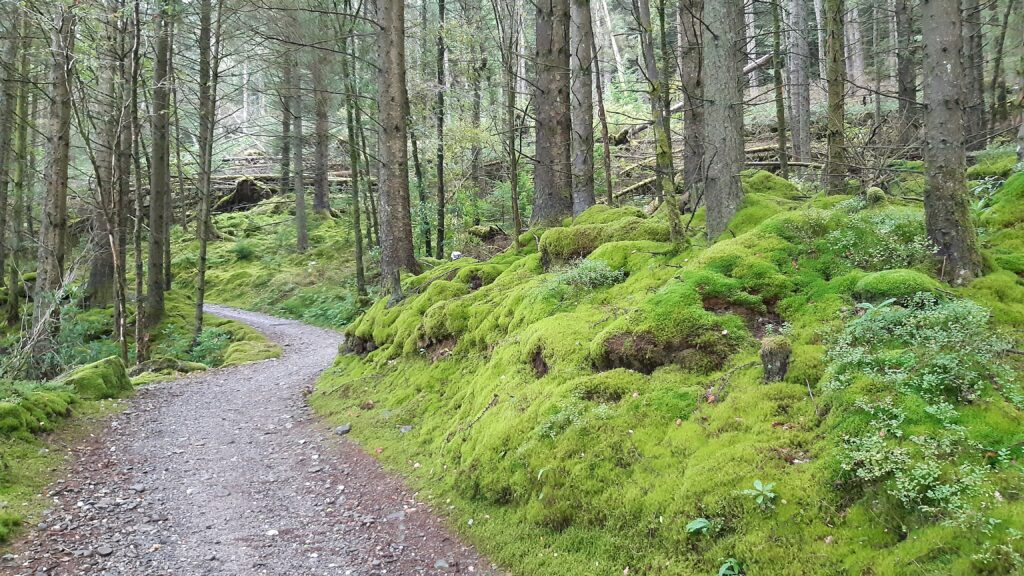 Somewhere near Laggan we stopped to clear the trail of fallen branches and this timed perfectly with two women riding the other way, also on loaded bikes (MTBs). We had a nice little chat with them and exchanged tips for each other’s upcoming trail sections. Always good to meet fellow bike travelers to lift the spirits. Thanks ladies! 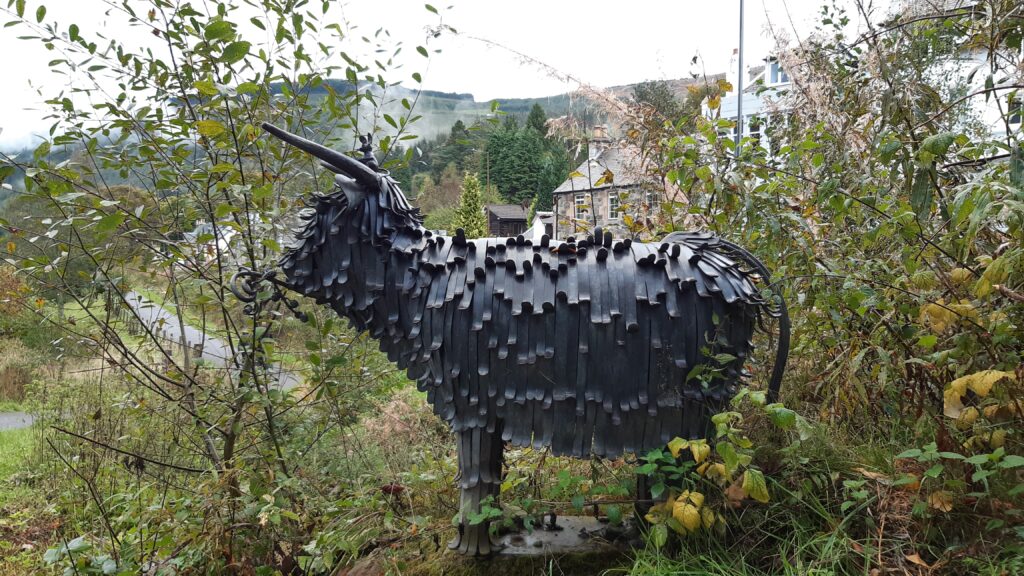 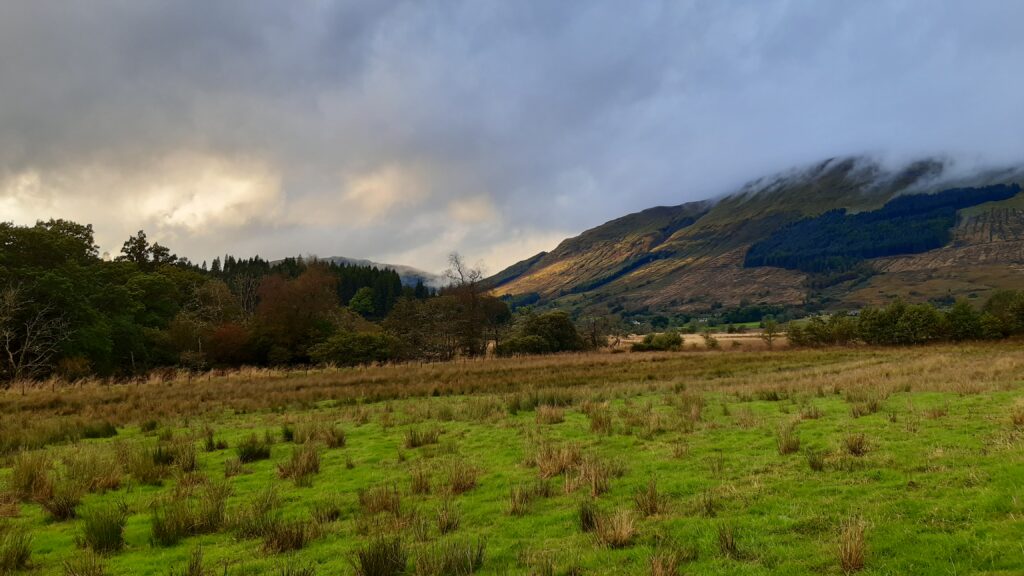 Yes, every view in Scotland looks like an oil painting 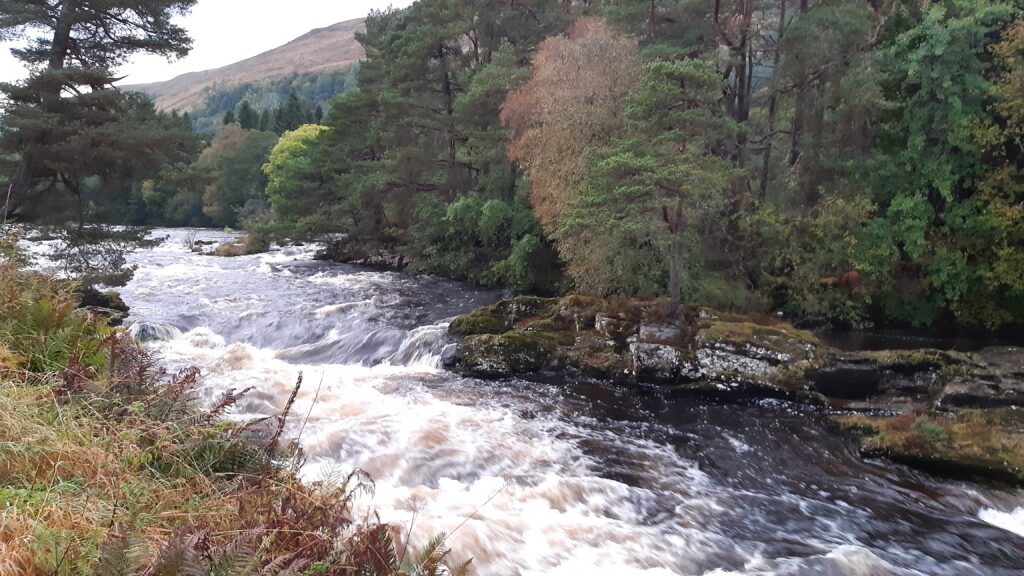 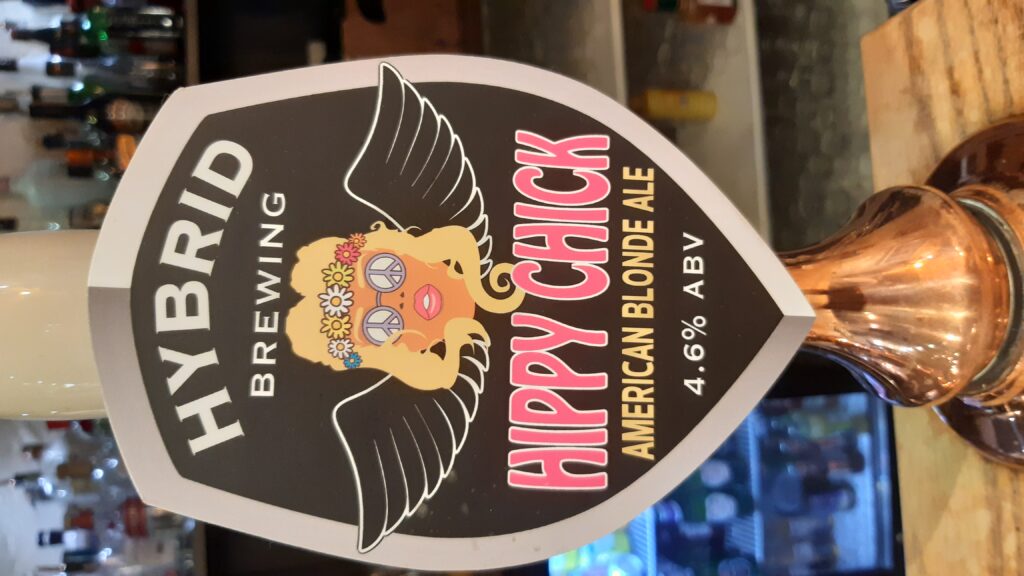 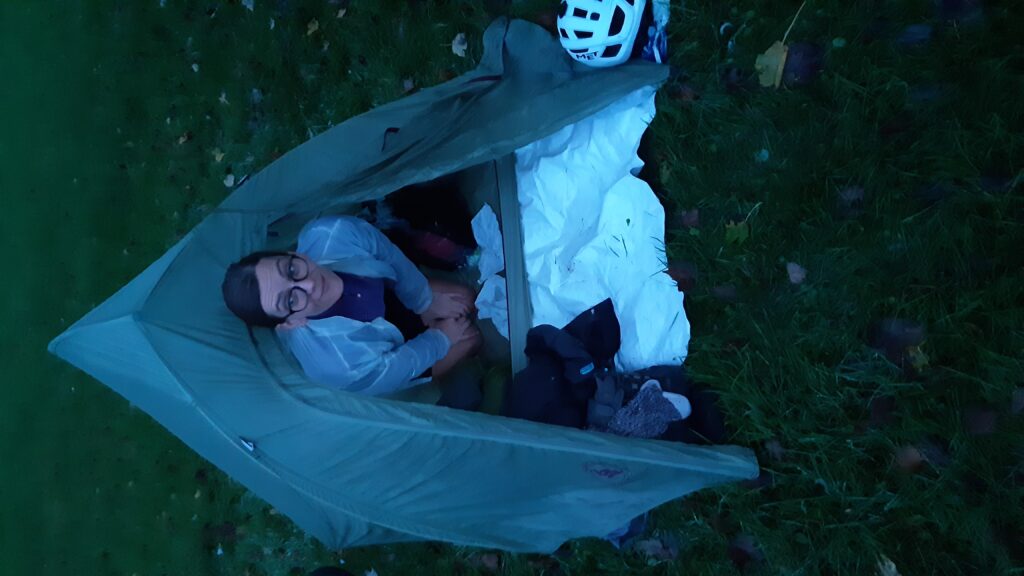 We had decided to make the most of daylight and ride beyond the ATM’s Day 1 scheduled stop of Balquhidder Station and aim for Killin where there were more pubs and shops we could use for dinner before setting up camp. We had burgers and beers at The Falls Of Dochart Inn and, after speaking to some locals, decided to ride up the hill out of town to look for a tent pitch rather than pitch near the lochhead where there might be wardens a-wardening. I was so tempted by some lush, flat grass that I ignored the noisy hum of a hydro plant in the background. We slept… a bit… being cold and disturbed by rain through the night.