El Seano modelling The Short History of Nearly Everything: I found this image funny because we both bought Bill Bryson’s book during our separate European travels. We both cycled. We both worked for the same company. God damn copycat! 😛

Unfortunately, due to the laws of astrophysics, the original image cannot be altered. I instead offer this modified image as an alternative for the United Christian Hands Across Gods America members. Cast not your eyes upon the foulness above! Bathe in the gloriousness of his holiness.. (hippy agrees, the knee WAS a bit too much!) 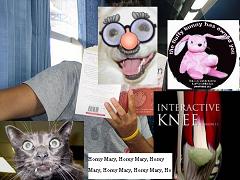 5 thoughts on “A Short History of Nearly Everything”