Day 7: The first part of the day is easy riding along Strath to the hydro dam in the shadow of Ben More Assynt. A short steep climb takes you to Loch Shin. Just after Merkland Lodge turn onto an upland offroad trail to Gobernuisgach Lodge. Descend to the ford at Cashel Dhu. CAUTION: If the river is in spate do not cross here. Better head back up river, cross if safe next to Ben More Car Park or better still cross using the bridge at Alltnacaillich followed by one mile portage to connect back with hill track to Loch Eribol then onwards on the coastal road to Durness. 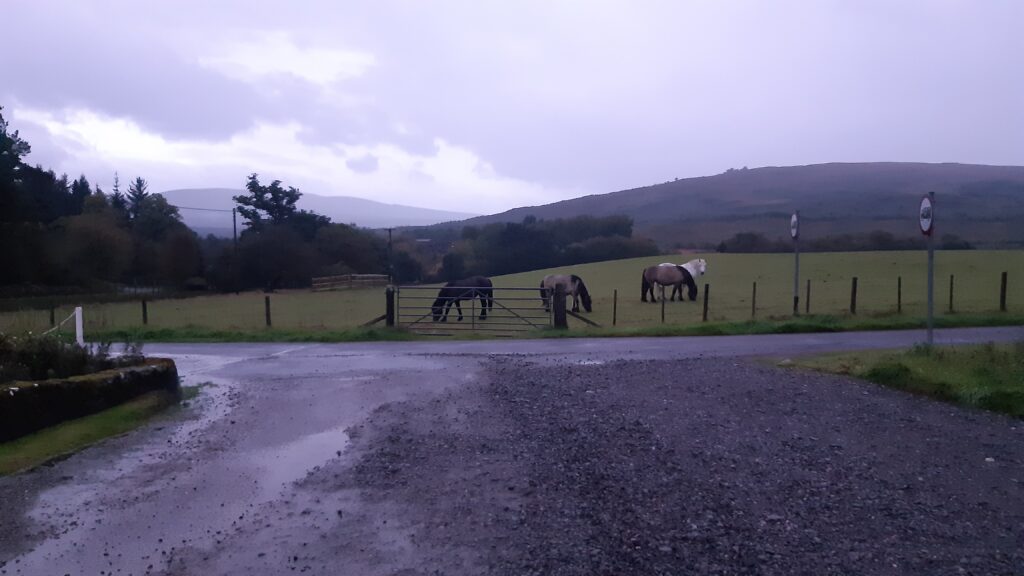 We had our alarms set so we would have the tent packed up by the time the Achness Hotel opened for breakfast aka making the most of the daylight but still smashing the fry-up on offer! Frazer (Achness manager and chef, to my knowledge) made some amazing scrambled eggs for me. Full up, we eventually ride out and up along the River Cassley. 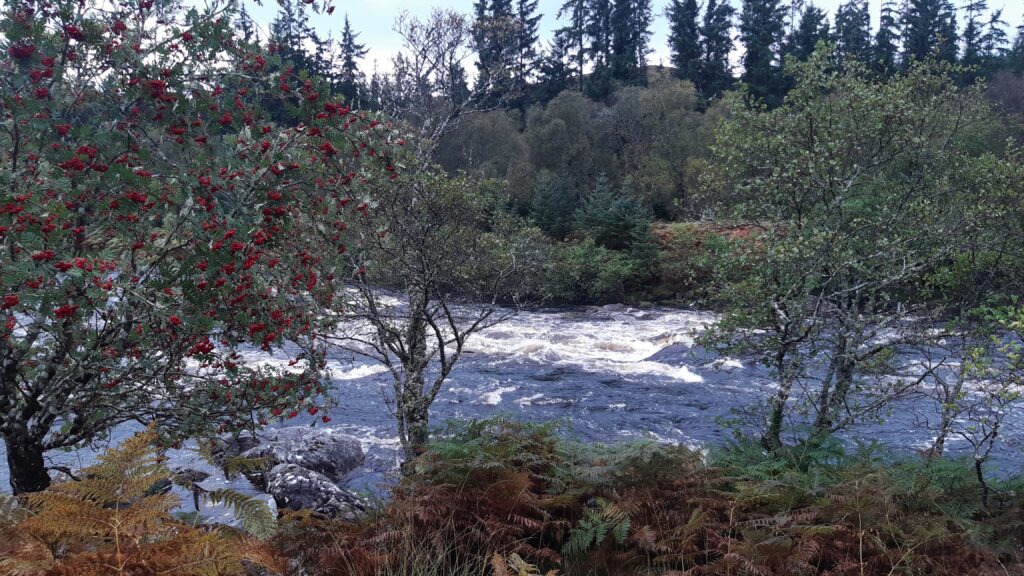 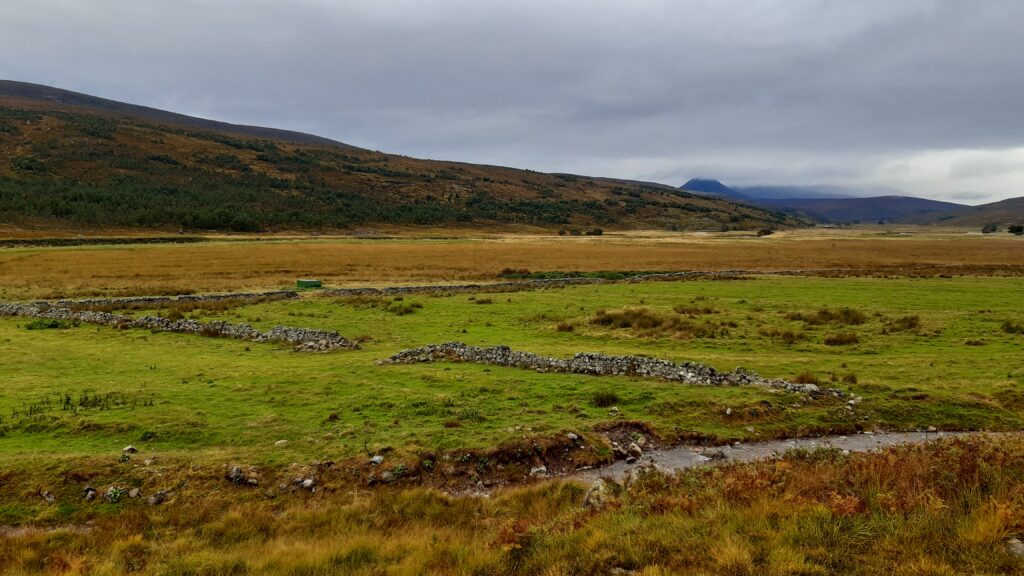 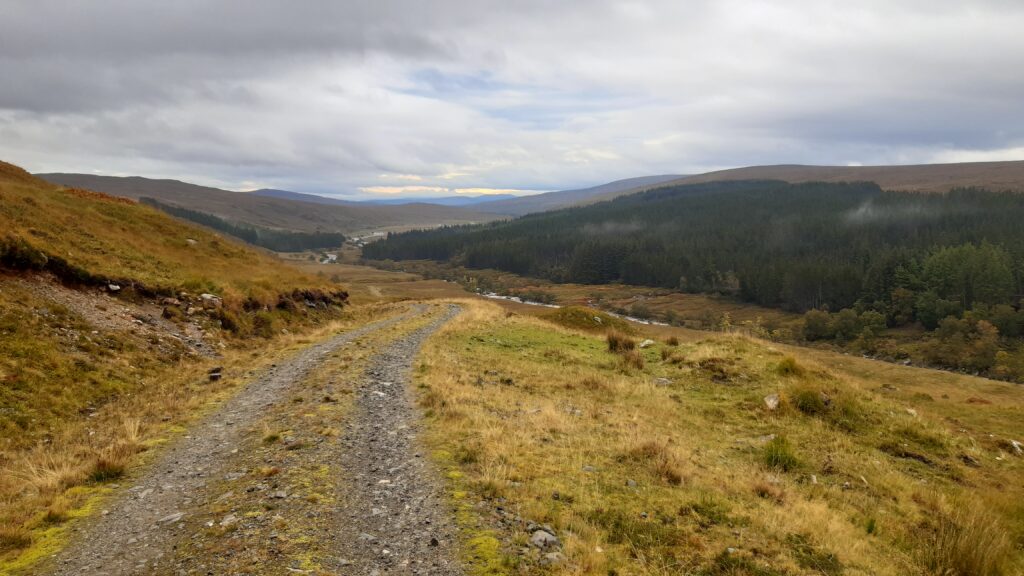 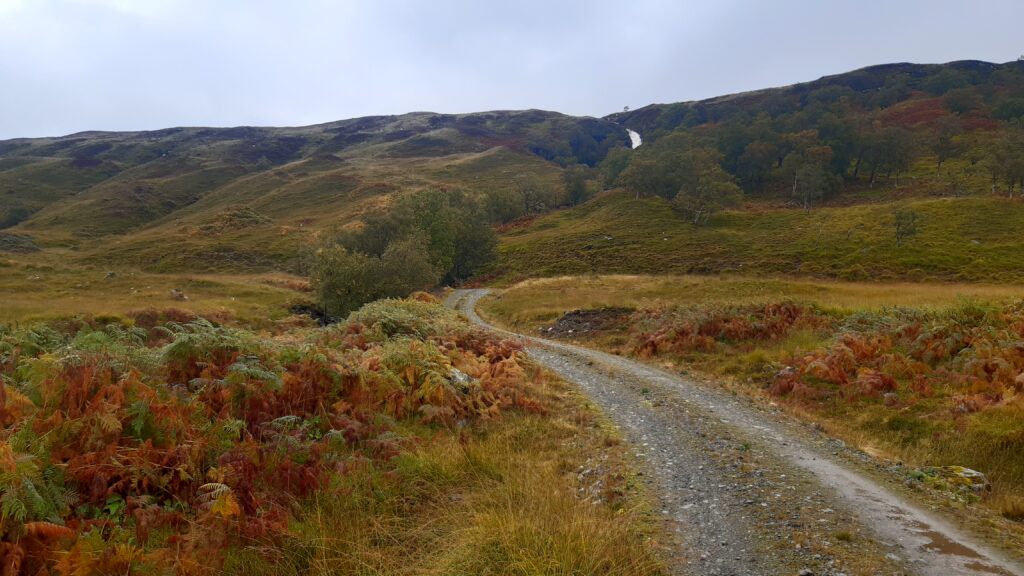 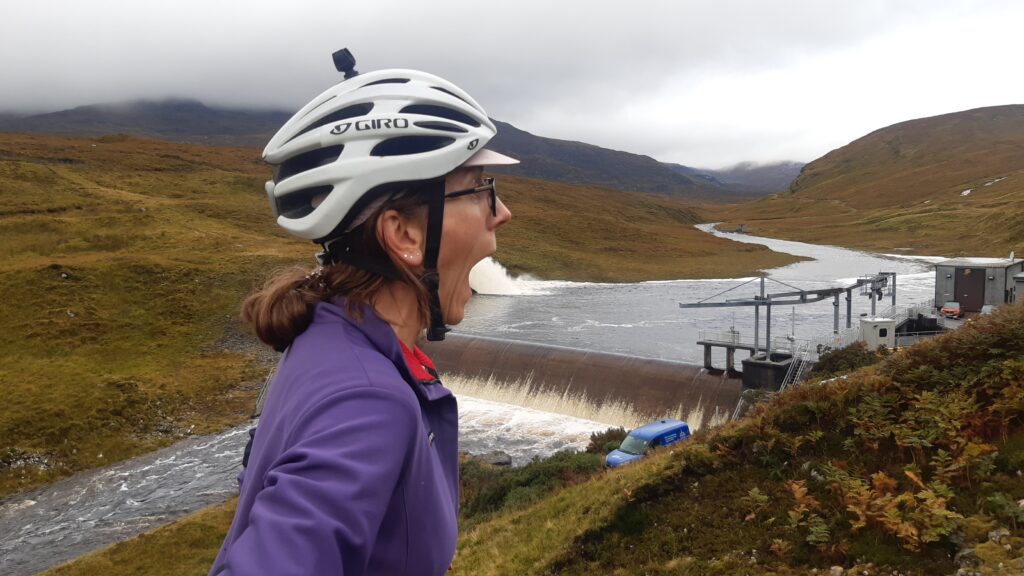 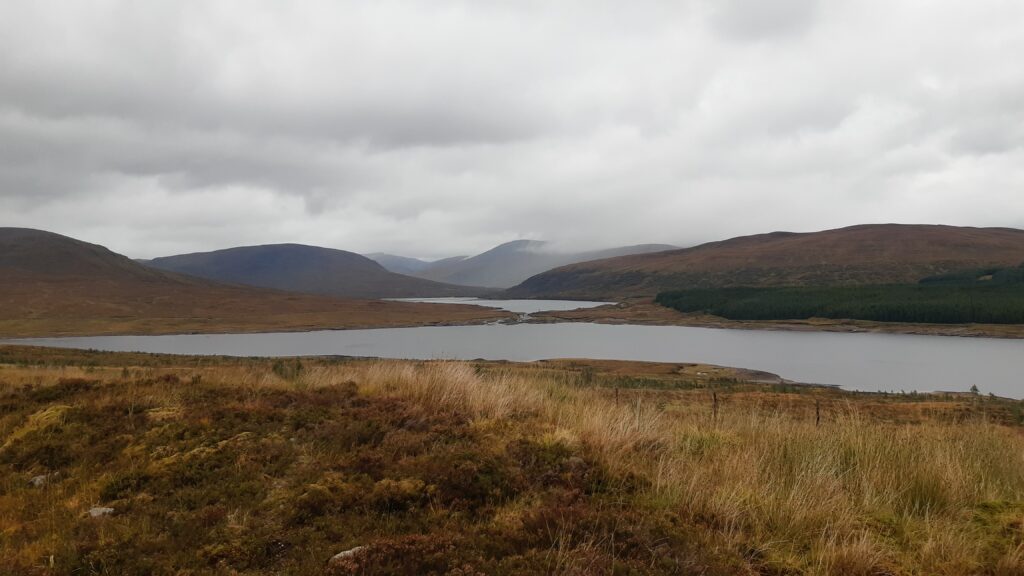 Loch Shin, photo not taken from up high like I wanted to…

The climb up from the Duchally Weir is paved but tough. I use ‘relubing of my chain’ as an excuse for a breather. Note: waxed chains get stripped and noisy pretty quickly in the wet in Scotland; but it was a case of run what ya brung for me. I was carrying Ceramic Wet lube and once clean and lubed the chain would quiet down again. Had a funny incident on the descent to Loch Shin. I was in front and thought I’d let Malwinki catch up and at the same time take a photo of the loch. So I stop near a hillock before a turn and go to get the phone out for a photo when the hillock moves, waves its arm and tells me to keep going! Turns out some deer hunters in camo (legit SMIDSY!) were laying right there and I’d stopped right behind them. Tip: if you’re a deer hunter, maybe don’t shoot from 2m off an open road and don’t get upset when someone doesn’t see you if you’re dressed in camo! Ha!

Not needing to detour to Overscaig Lodge for supplies we turned north on the A838 past Loch Merkland and then branched off right through West Merkland lodge’s ‘two-boulder gate’. 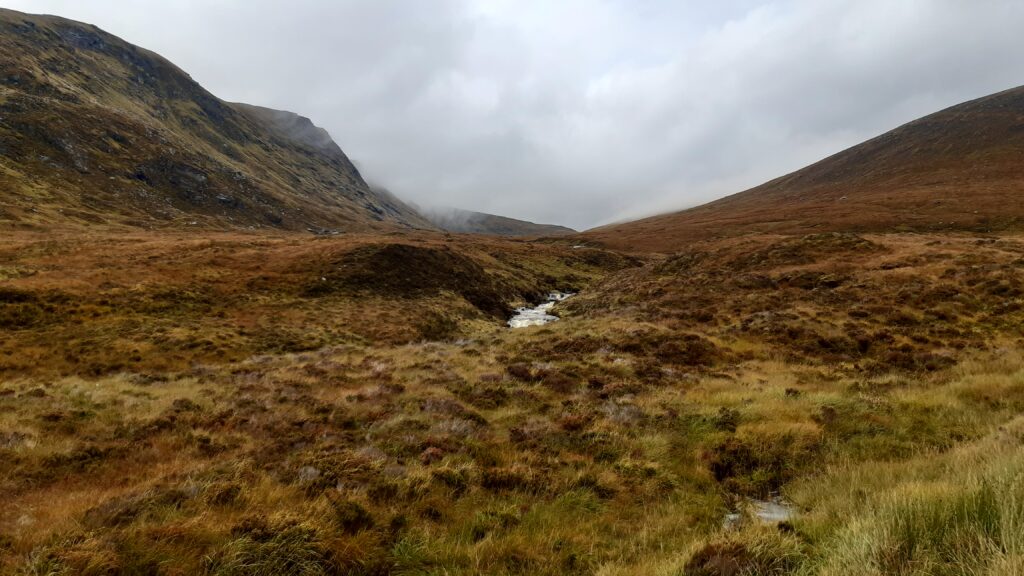 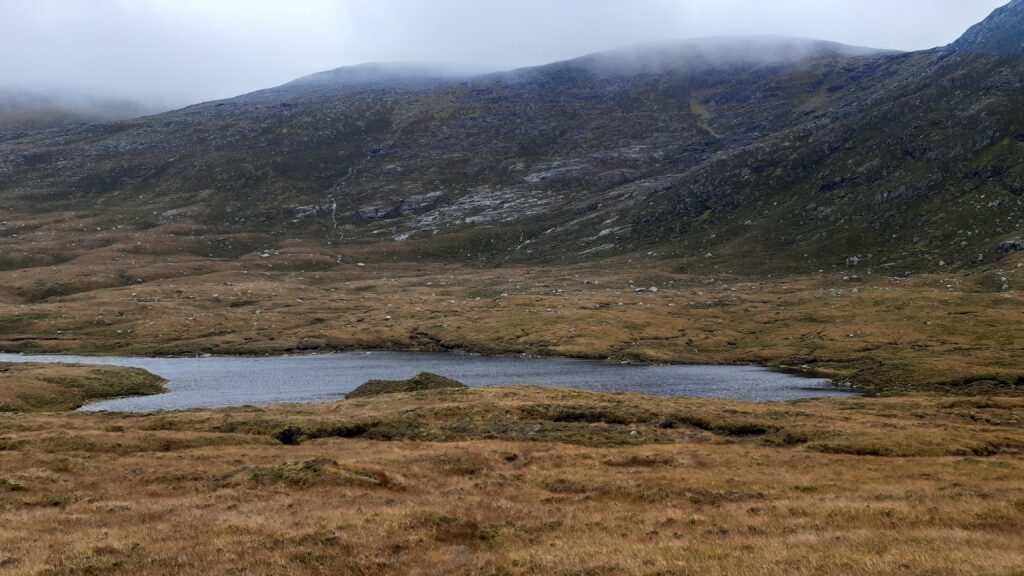 Huge boulders to our left, running streams to the right with nothing for scale

We stopped for lunch in the middle of the trail here ^. It was just immense. There were huge boulders that looked ready to topple down on us at any moment and over the water was the noise from the streams running down the mountain. There was nothing man-made to indicate the scale of anything. It was just huge, beautiful nature and a nice moment to stop and ‘try’ to take it all in.

Has anyone seen the ‘remote’?

No drama with the calmer panorama

Passing Gobernuisgach Lodge, we hit some single track following the river. If you have the full route file off the ATM website it actually takes the HT550 route and follows the Glen Golly River left here but this was supposed to be much more technical with lots of hike a bike so we went right along a very wet riverside ‘track’. The trail then seems to go across a field but we lost it and were just wandering through high grass and stream crossings aiming for the next turn until we found a track again. Quite confusing and could do with a few more GPS points in this file to make it more obvious.

Not the HT550. We went right and took this very soggy riverside trail instead

We suspected it was going to be a ‘no go’ but the plan was to check out the 4m river fording at Cashel Dhu to see if it was passable. Unfortunately, it was more like a 40m crossing and there was no way I was going swimming with a bike (again). 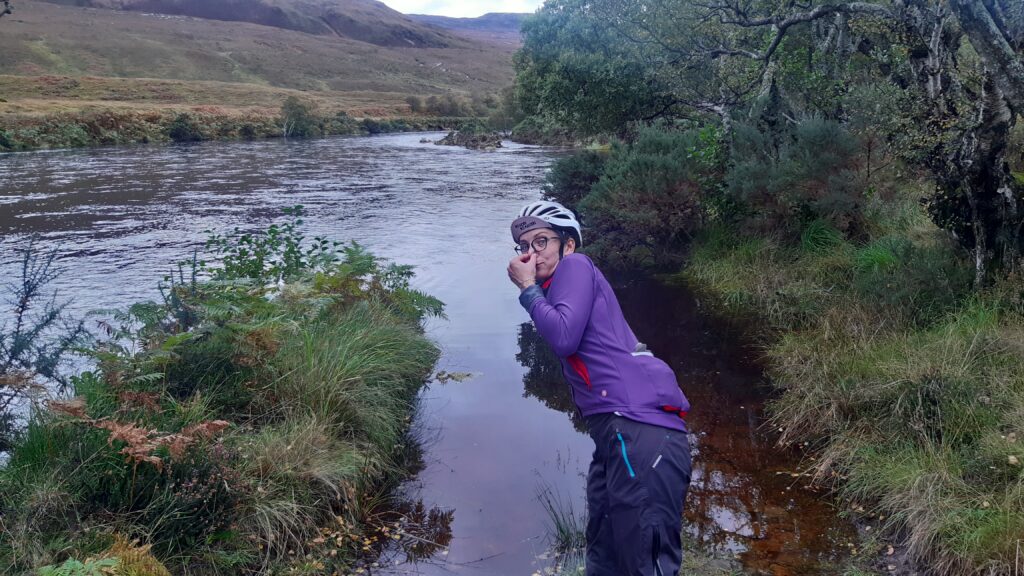 We backtracked, which was handy, as I found my sunglasses on the trail that must’ve bounced off on the way down to the river. We weren’t going to go back to the Alltnacaillich bridge and take the 5km ‘portage’ option so instead rode north along Loch Hope and joined the A838, which adds maybe 15km and a couple of road climbs before it rejoins the ATM route again at Eriboll. 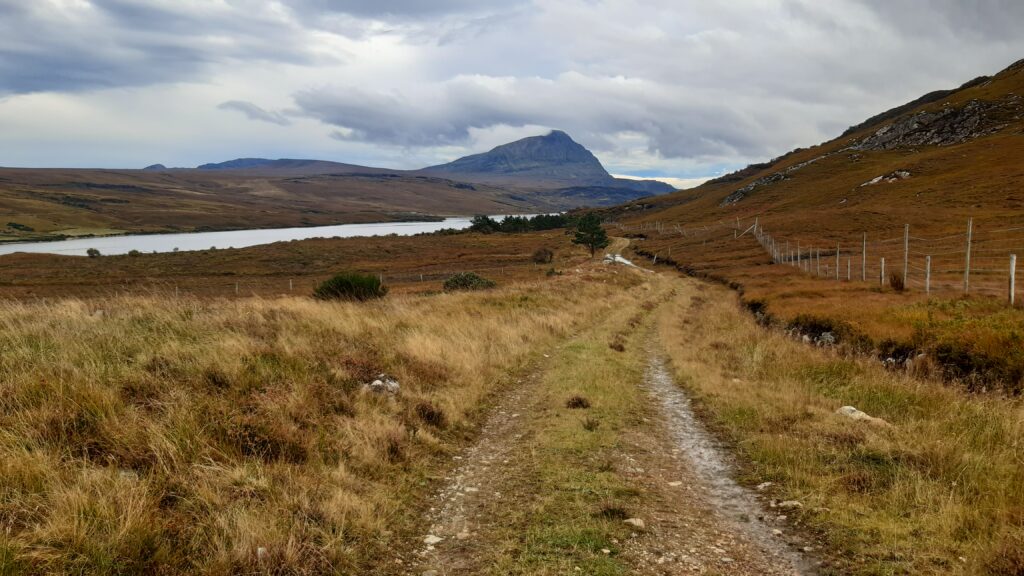 We’d had no tyre dramas after Malwinki’s valve issue right at the start so it was a bit funny that I had a rear tyre puncture (the first for this ‘former frontman’ Pirelli Cinturato M) on the road with only 20k to go until Durness. This was the first time using a Dynaplug in anger. It worked exactly as expected, sealing the tyre and letting us continue fairly quickly (after hosing all the sprayed sealant off my frame and saddlebag). 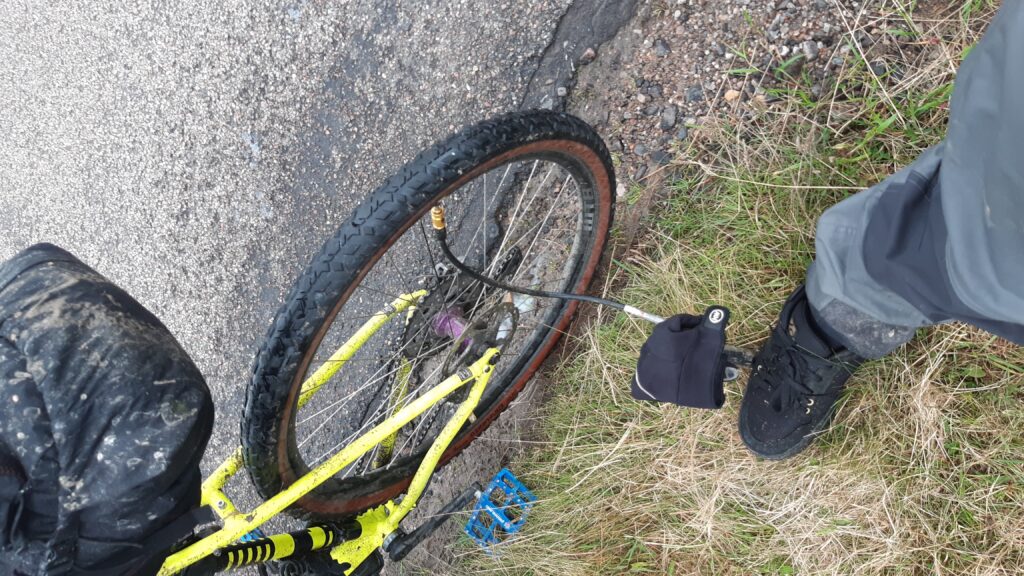 The only puncture for the entire route. Dynaplug worked well.

We arrive in Durness!

This would be our ATM finish point. The Cape Wrath ferryman was on holidays so we couldn’t get over to Cape Wrath itself. We knew doing this out of season that it was unlikely we’d get all the way so this is one of those things you need to be prepared for. We were stoked to have made it all the way to Durness given the rocky start, terrible weather and kit issues. So, we weren’t too bothered about the Cape Wrath section and it gives us a reason to come back! 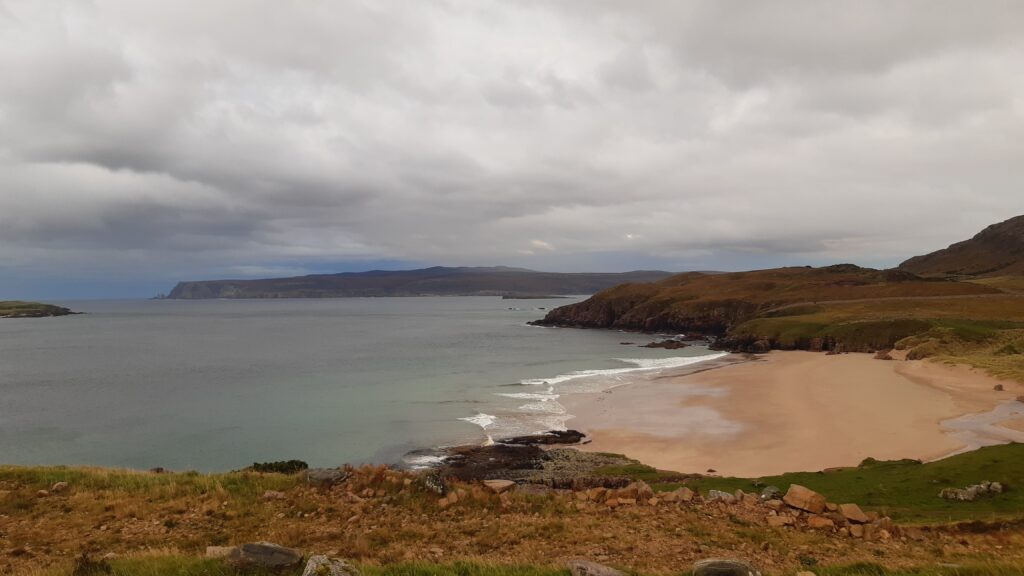 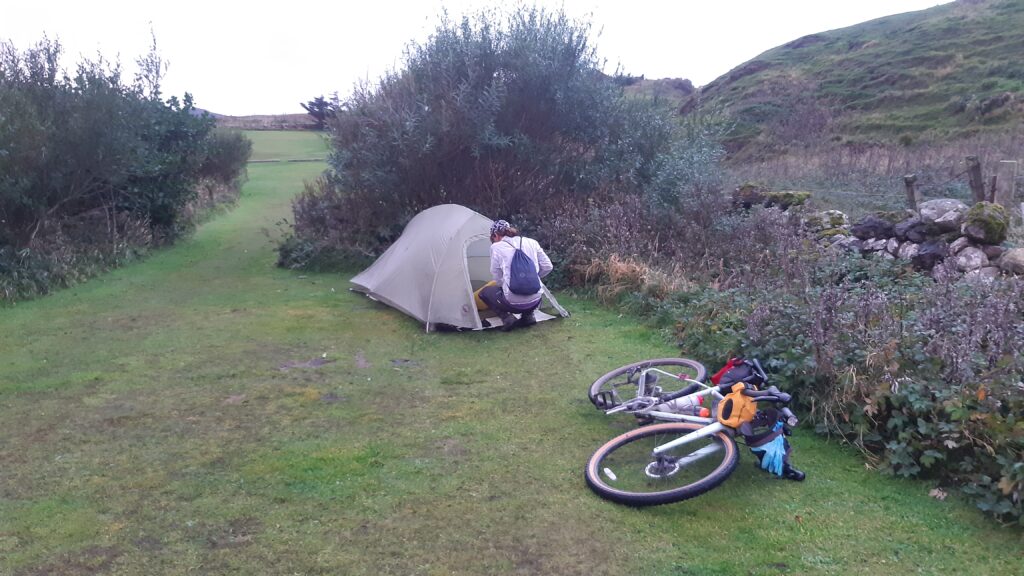 We try and find a B&B but everything is either shut, full, or £300/night so we end up camping at Sango Sands for £20. They’ve got showers (extra thanks to whoever left their shampoo in there) and a nearby bar and some onsite food shop doing takeaway next to the pub. We pitch up out of the wind. The Tyvek ‘groundsheet’ (it’s building insulation) off ebay we cut to size is full of holes now from rubbing on Malwinki’s brake cables and I wonder how it will cope with the soggy ground. Hot showers before ringing through a large food order just before the kitchen closed. I find another tick on my leg while in the bogs and remove it with no drama. Over to the bar it is for a celebratory Irn Bru (and some Orkney beers, whiskies and the takeaway meals we ordered). While at the pub we decide not to hang around tomorrow but instead ride south to Lairg to get the 3pm train to Inverness then overnight there and train to Glasgow, then overnight and another train back to London. We ring up and book bike spots on the necessary trains. 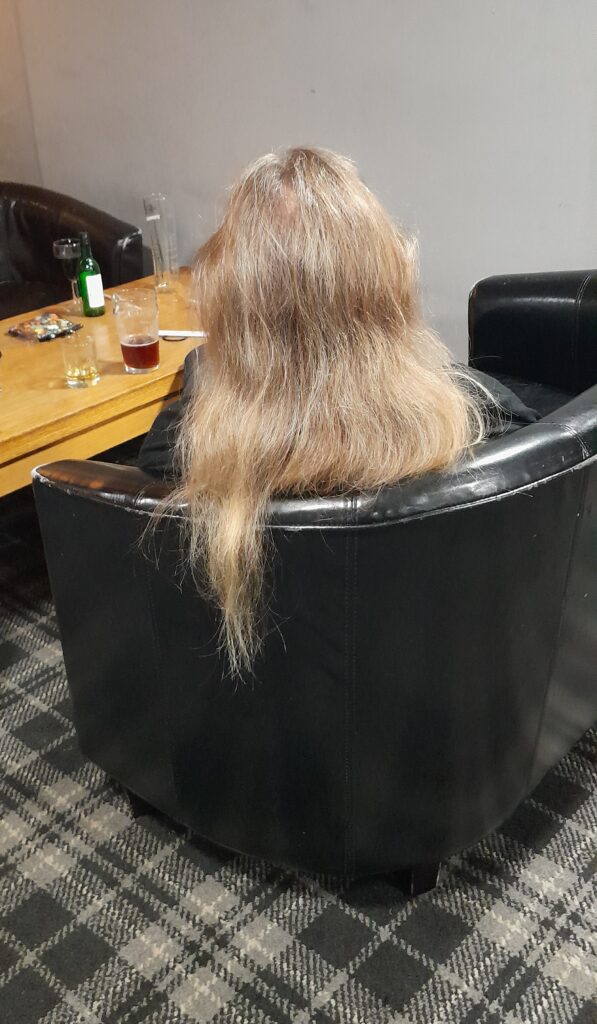 What’s that Lassie? It’s your round?