Looking around for gravel / off-road options I stumbled onto Mark Goldie’s http://ridgewaydouble.net/ route and a vague plan was formulated, some more kit was purchased for @malwinki and packing commenced…

The weather looked good and since I’d finally given away the rear rack I’d had sitting on my porch for 10 years (typical!) our only option really was bivvy bags – the 1p Macpac tent I used touring Europe in 2005 was too big for any of my bikepacking bags. Malwinki got my waterproof RAB Alpine and I would use my ultralight most-certainly-not-waterproof fly bivvy. She had a full-length Alpkit sleep pad and I had a 3/4-length Thermarest NeoAir. I took my down jacket and half bag and Malwinki used my old, heavy, large full-length down bag, stuffed into a handlebar harness I’d just bought off @Aroogah.

Rather than go straight into wild camping I thought I’d ease Malwinki into this world by using a proper campsite – you know with showers and toilets. With other sites closed until April 2021 she found that the Barge Inn, Honey Street was open and we booked Sat night.

I’d used RideWithGPS to plot a cycling (rather than my normal fast, main roads) route to the start and combined with the 6am Sat leaving time it was surprisingly quiet and made for a very pleasant start. 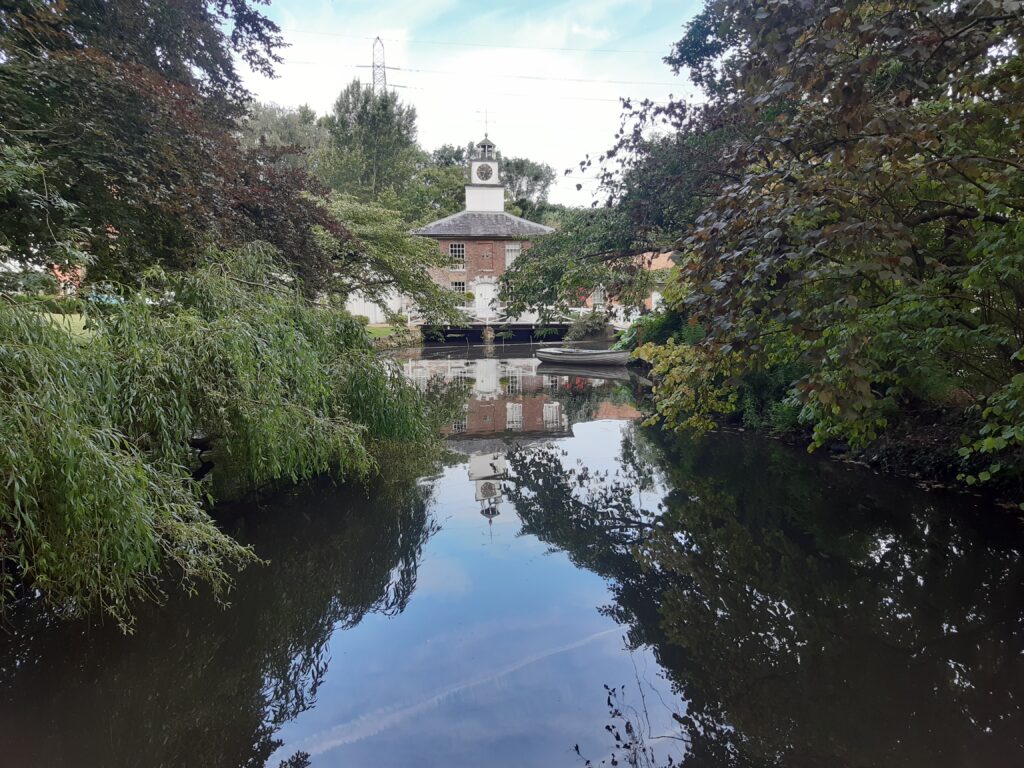 Having lived together for so long, our fluid, faultless communication had us standing in different spots at the start, each waiting for the other for 10 minutes…

Reunited and moving along the actual route now, we pass the Bridgewater Monument / Ashride Estate just before 9am and it’s already very busy with walkers and other cyclists.

Riding up Crawley’s Lane, a road climb we’d done on the previous week’s gravel grinder, we caught up to a bloke riding part of the route on his MTB and had a chat for a few kms. He done his knee in a couple of weeks before hitting a deer at speed but seemed well on his way to recovery. I let him go while waiting for @malwinki at the mowed field, where all the Kites were circling for critters, last weekend. It was a good call because it got a little more off-road through this section and I wouldn’t have been able to keep up on slicks with my skill level anyway and I didn’t want to ruin his fun. Thanks for the chat dude.

Through the woods we had a few navigation issues (I took a Garmin Edge 1030 and Garmin etrex 30x that I was trying on a new 3D-printed etrex mount (thanks to @Stonehedge for the printing and Ty Domin and/or his partner for the design). Disabling a borked map on the etrex helped but in the end I turned it off and stuck with the slow, but clearer Edge 1030. Eventually we popped out into this clearing with a lovely view. Turns out it’s Whiteleaf Hill, which I’ve climbed a lot from Princes Risborough on the road but never seen this side:

Further along the trail we start seeing security guards sat on folding chairs along a fence line. WTF? Looking through the trees all I can make out is that it’s a big hole. I assume it’s some kind of mine or maybe a water storage reservoir but why the guards? Well, we google it just now and it turns out it’s this: Water dyed black at Chinnor quarry to deter swimmers

At Goring we stopped for a sit-down lunch and refilled our bottles outside Pierreponts Café. Here we got chatting to a cycling trio from Tatrafitness. I think they were as curious about our bikepacking setups as I was about why they had jerseys referring to the Tatra mountains (border mountains between Poland and Slovakia). Turns out they were Reading locals but his wife was Slovakian. They were on a loop to visit World’s End. I suggested the pub in Camden. 🙂

There’s a reasonably steep climb out of Goring (unpaved road or the rougher side track we took) and then you start getting out into more exposed open sections.

There’s even some proper singletrack riding out here. I think this is a place called Grim’s Ditch: 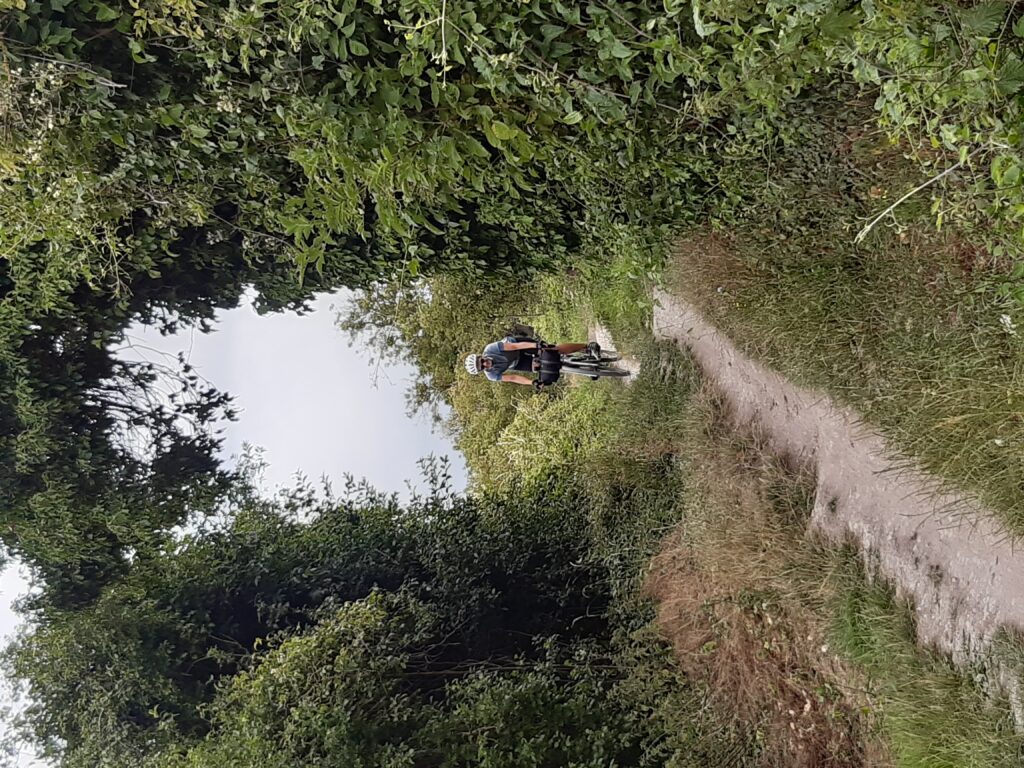 Mark’s route has a bunch of taps marked on it but of course I didn’t copy those to my file and Malwinki only found this one because another couple were using it when we rode past. Doubled back and filled up: 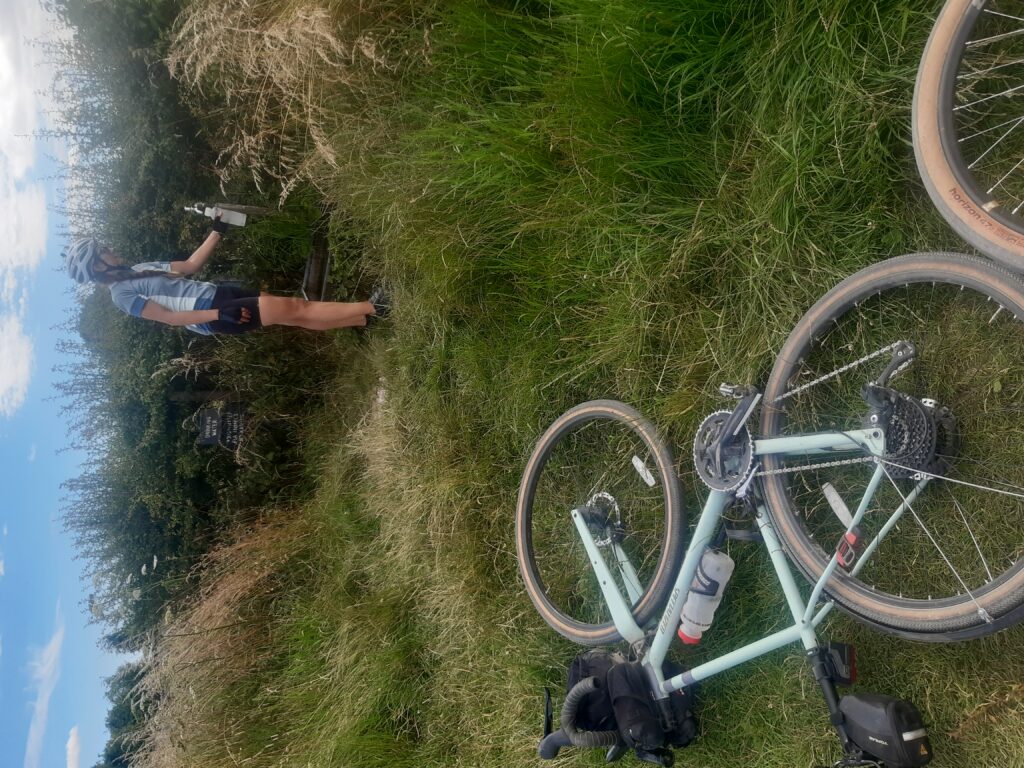 The trails towards the south get very rutted. You can’t really see it in this photo below but my pedals are below the edge. I got so frustrated smacking my pedals or feet into the sides of the ditches and unshipping my chain or having to bail I think around here is where I had a meltdown, chucked the bike into some bushes and sat down for a bit. Higher BB and smaller feet would help here. These are the Nukeproof pedals I bought for an MTB race ages ago – much better shoe grip than the ‘midfoot’ Catalyst pedals I’ve been testing, as they have spikes and not just allen key pins. So, I now need to find some pins for the Catalysts and they’ll be grand (or better yet some SPD shoes that allow the cleats to go really far back – anyone?) 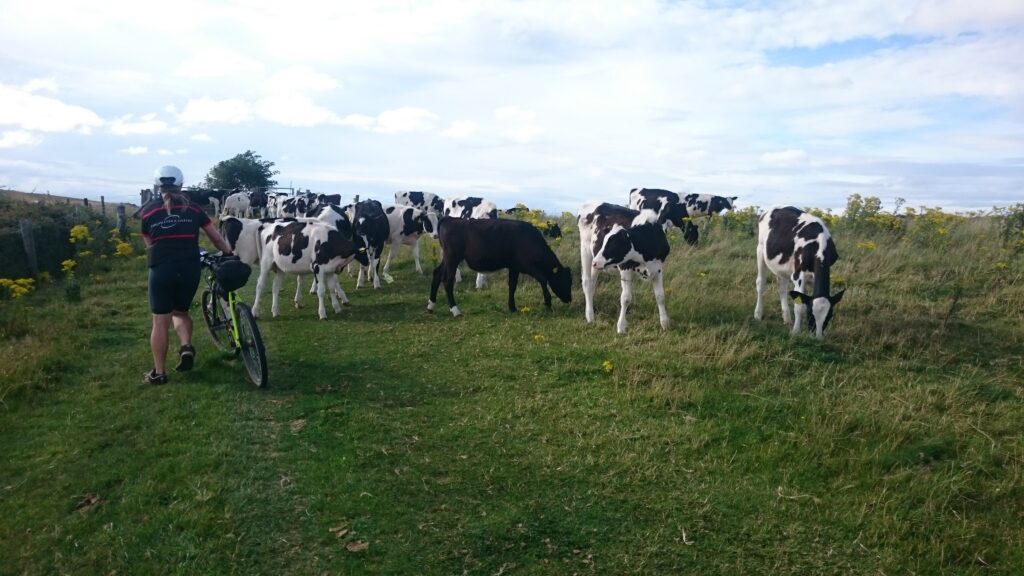 Not the normal reason you’ll see me hike-a-bike 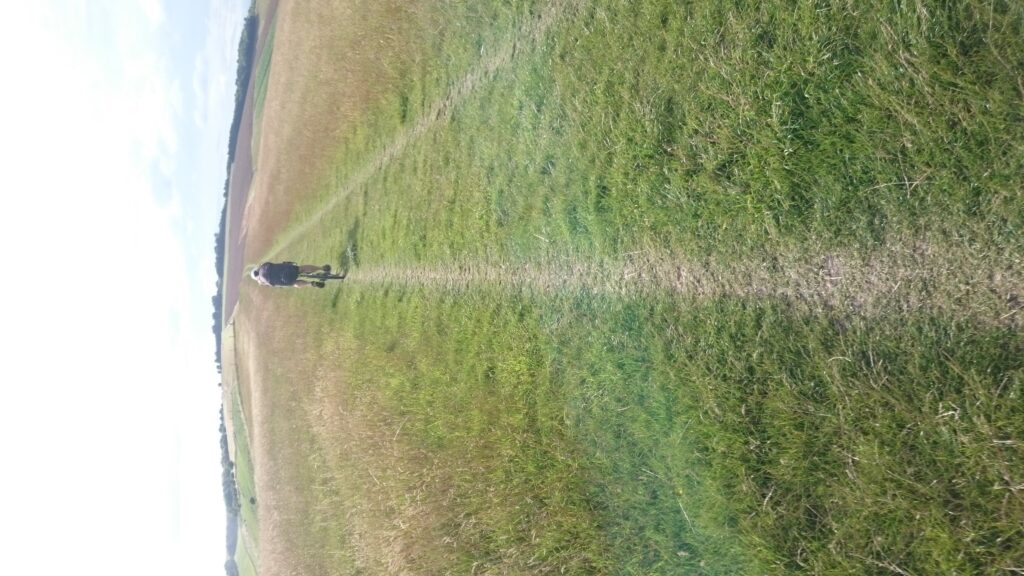 The ruts in the final 10k got deeper and one switch-over finally got me. Thankfully, I had knocked off most of my speed and Malwinki was a way behind so there were no witnesses this time. No damage to me or the bike.

Then finally, we were done! Now it was just under 10k to get to the Barge Inn for that well-earned pint!

We paid for the campsite and got to ordered food and drink quickly as they stopped serving at 8pm. The actual pub isn’t open but they’re running outdoor drink and food bars. There were tonnes of people and they were maybe struggling a little bit but we got fed and watered and while Malwinki was showering I got chatting to a couple of lads that had ridden out on gravel bikes as well – Darren and Grant. It started raining (obviously, because the forecast said no rain) so they invited us over to share their table canopy and we got to chatting and drinking. Eventually we went over the other side of the pub with the majority of the partying campers and continued. (FYI: I’d showered before dinner too in case you were wondering). This merriment went on until the bar shut and eventually everyone retired to their various accommodations. I say everyone, there were still people up for a long while after that. We surveyed the campsite and decided the quietest corner of the big party canopy was for us. Obviously it rained quite heavily most of the night because has a weather forecast in England ever been close to accurate? We started outside the hay but soon shifted inside under the large party canopy and at least didn’t get any more wet although we didn’t get much sleep either. I wonder how Grant’s ebay special tent went in all that rain? Better than my open-topped bivvy I suspect!

We left camp the next morning before 8am after waiting for the rain to stop and after we’d cleaned up and packed and eaten the panini we’d bought specifically for breakfast.

Not a lot to report about the ride home other than it was pretty slow going with both of us lacking sleep, coffee was more plentiful than I remember from earlier morning starts on audaxes and there was some more nice lanes and traffic-free paths to enjoy.

Somewhere after the Jubilee trail I almost crashed on a turn as the tyre dove and I realised I’d I got my first puncture with a tubeless tyre. This bastard took the best part of an hour to fix, mostly because I didn’t know what I was doing – I tried everything from adding more sealant, trying to glue the tyre with superglue and finally using the GI repair kit to stab a sticky rubber thread (anchovy) into it. I don’t think I loaded the GI inserter properly the first time but I found on maybe the fifth go that with some twisting motion the anchovy was staying put and it did eventually plug the hole so I could reinflate and finish the ride (we only had 20k to go so could’ve got the train but from Langley but I figured I should use this as a tubeless tyre learning experience).

Not a bad trip all in all. Malwinki’s 1st bikepacking trip, her 1st bivvy sleep, my 1st roadside tubeless repair, our first British campsite stay. 340k all up for the weekend, much of it on dirt and for me, all of it in a pair of trainers. Quieter roads than I’m used to, good scenery, met some cool people.

With only one waterproof bivvy and no tent, I got wet early on (was outside the canopy initially, because people were using the canopy until late) so didn’t use my down stuff so I was cold to begin with. Eventually I put my down jacket on under my rain jacket and some gloves on and that was better. Mal was toasty with her full sleep pad and full down bag and waterproof full bivvy. We just need a little more kit – this was a bit of a rush so we compromised what we took. If we do again, I’ll need another waterproof bivvy and another full-length sleep pad and either a tarp for those or just get a 2P tent for the both of us that we can actually use in the rain.

I’m not sure about the flat pedals. At least I know the pins work much better than the Catalyst allen key studs but really what I want is a midfoot SPD setup. I’m going to look for SPD shoes that have the furthest back cleat mounting point and see what I can do with those. Also, I might move back to 700C wheels with say 42mm tyres and see if that lifts the Kinesis up enough to help with pedal strike in the ruts. Or just take an MTB 🙂
Strava
https://www.strava.com/activities/3787849905
https://www.strava.com/activities/3790121832