This morning I was “Just Riding Along” (I can hear all the LBS guys groan but I’m serious!) when my GT frame snapped.

I was 30 minutes into a fairly relaxed 36 minute commute, having set a PB for this same ride yesterday (finally cracking the 30 minute mark with a relatively easy 29:52).

I was cruising along Sussex Gardens when there was a loud bang from the rear wheel.

I thought it was the quick ‘n’ nasty spoke repair I’d done last week but a glance seemed to indicate the wheel was true. Another quick look at the next set of lights and everything seemed ok.

It was all very odd because when I spun the wheel, everything appeared straight, but as soon as I jumped on and pedalled, the back-end was all over the place, like I had a flat rear tyre.

I thought it might be a broken axle or perhaps shot wheel bearings or some other internal chaos (maintenance levels are not high on this bike) so I watched the hub closely for signs of movement (while dodging the black cabs of course). Nothing seemed out of the ordinary except the swishy rear end. WTF?

Being close to work I just kept going, slowly, knowing I’d get to check it out properly once I’d stopped.

Which I did. The spokes were all intact and the wheel spun straight and free..

So I grabbed the wheel and yanked it side to side. The whole rear triangle moved. This is when I spotted the crack all the way through the drive-side chainstay. Damn.. 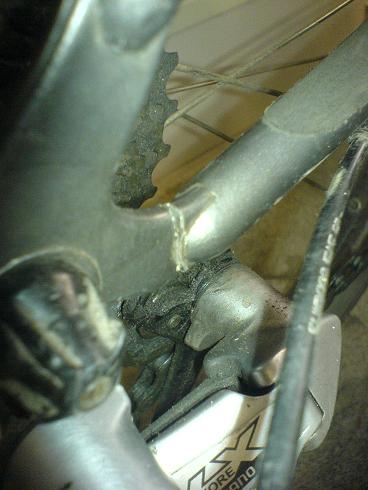 Pic was taken at an odd angle, in a dark room with my mobile. I’ll try for a better one just as soon as I work out how to get the bike home!

This certainly explained why the whole back end was fishing around even though the wheel looked and spun fine.

Ode to the GT:

The GT Talera was a mid-90’s steel bike bought for $300AUD in showroom condition with lots of bits in 2002.

It was going to be my first singlespeed project but I got into trials and fitted it with wide bars, platform pedals, etc.

When I bought the trials-specific Zebdi, it was time to turn the GT into an SS. Mick from CCW helped me do this under the “$0 Rule”.

It did a tonne of commuting in all weather conditions.

I had so much fun with this I rebuilt it with better bits when the first lot of parts wore out.

Spent 4 months riding around Europe on it – killing both wheels – one from loading strain, one from a head-on with a motorbike.

Rode it briefly while working as messenger for Courier Systems.

Back in London it was my commuter since early 2006 when I started working for a company with showers.

One of the guys who rides at work suggested this mob for frame repair: Mercian

Not sure of a course of action yet but given the repair is likely to cost more than the bike is worth, a new machine is definately on the cards. “N+1”, where N=0, currently.

For now I am a Tube-bitch.

But that On-One Il Pompino is looking better every day.. “I’m EXCITED!”