T’was a normal work day after a mental two weeks preparing for our user group (almost got my weekly hours done in two days!). Fixie to work (the sun really brings out the dopes in London). Had I thought about the TT, I might have ridden the Ribble. It was only because I’d previously written in my diary about a 10mi TT around the Hillingdon circuit that I even thought about it. Plus, Ray had told me you don’t need a BCF license to do TT’s.

Once home, I googled and found the Westerley event started at 7.15pm, which I could still make. Called Mal and she was finishing at 9pm, so I didn’t even have to feel guilty about not seeing her (she moved in on Sunday and due to work I’d seen less of her this week than when she lived in Hanger Lane!). Changed, inflated tyres and scooted out the door on the very odd feeling Ribble.

Odd? Apart from the fact it freewheels, I’ve come to the conclusion that I’m too stretched out on this bike. My arms had killed me on the last two Willesden club runs and the bike feels ‘loooong’ compared to the track bike. Thing is, I used to get pretty low on a 56cm frame with similar length stem, so what gives? Seat-tube angle is not as steep as the Peugeot so perhaps that’s the culprit? It makes me feel like riding the tops when I should be on the drops. My hands got pins and needles from the drops during the 10mi and this sort of thing never happened on the Pug.

Anyway, the “race”. ?3.50 to ride and I was 23 out of perhaps 28 riders. Number on the back and on the right arm so the time-keeper can work out who the hell we are. Starting order was registration order and riders were off in 1 minute intervals. The course was 11 laps of the 0.93mi Hillingdon circuit (10.23mi).

For the benefit of any aboc’ers who remember me, yes, I lost count and did 12 laps!!

I finally met Ed from One More Cup of Coffee who’s blog I stumbled across ages ago (I think because it mentioned “Ealing” and “cycling”?) and who’s progress I’ve been following to the point that I felt it necessary to join Willesden CC too! Unfortunately he registered after me which meant I was under serious threat of being passed by him! I’m actually not sure if he went by or not?

As usual, I went out too hard and was suffering on the second lap. The tiny ‘hills’ on this 0.93mi course conspired against me and turned my lard arse to a lactic arse. I made the mistake of taking a mouthful of iso drink on lap 3 because my mouth was so dry and this punished me for laps 3 and 4.

As 22 riders had gone off before me I was regularly passing people which probably gave me a false sense of speed and definitely made me work harder than I would’ve liked when going up the bumps past another rider.

I really should put more emphasis on “yourself” in “pace yourself!”.

Spinning away as I prefer to do I kept trying to gear up and drop my cadence to see if it helped. It did sometimes and other times I died in the arse. Around lap 8 I had to let go of the drops and ride on the hoods because the pins and needles in my hands were so bad.. after 8mi??.. told you something wasn’t right!

Ed did 25min as you can read here. Ed, I’m sure if you took the red ‘go faster’ helmet off you’d be a good 3min slower.. I reckon skinsuit and lack of bidons counts for the other 19 seconds 😉 😛 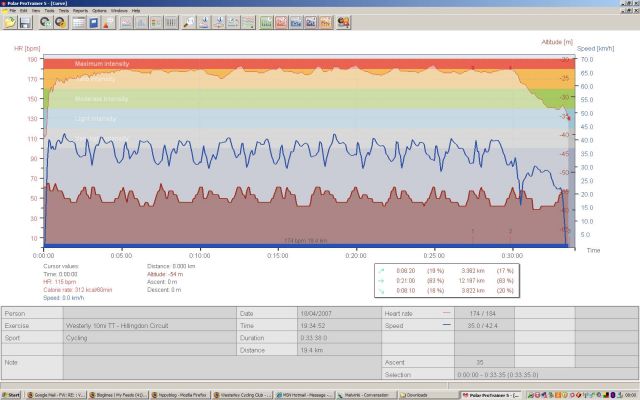