Day 3:  Follows hydro and stalker paths all the way to Loch Laggan to join the historic General Wade’s Military Road built in the eighteenth century which crosses the highest pass of the trail the notorious Corrieyairack Pass, followed by a long offroad descent to Loch Ness and Fort Augustus. 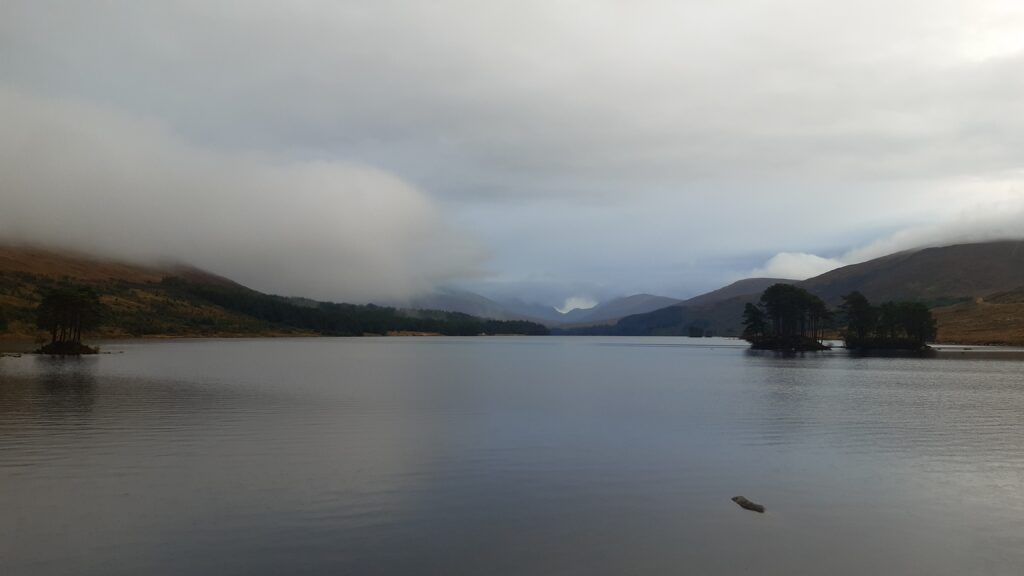 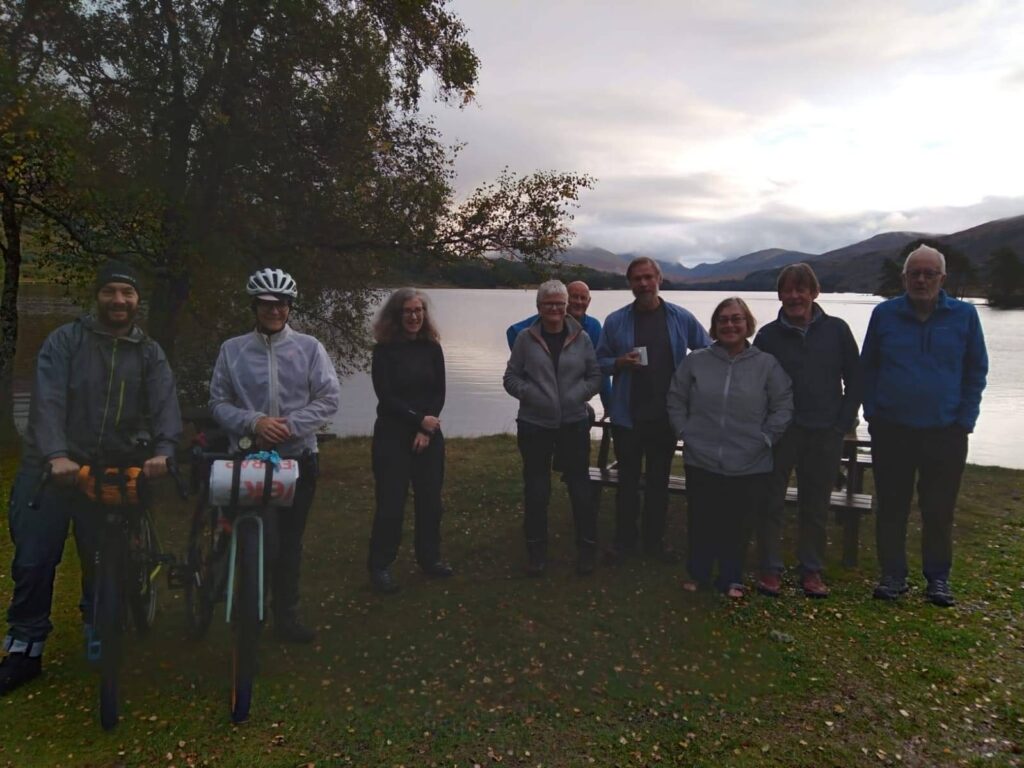 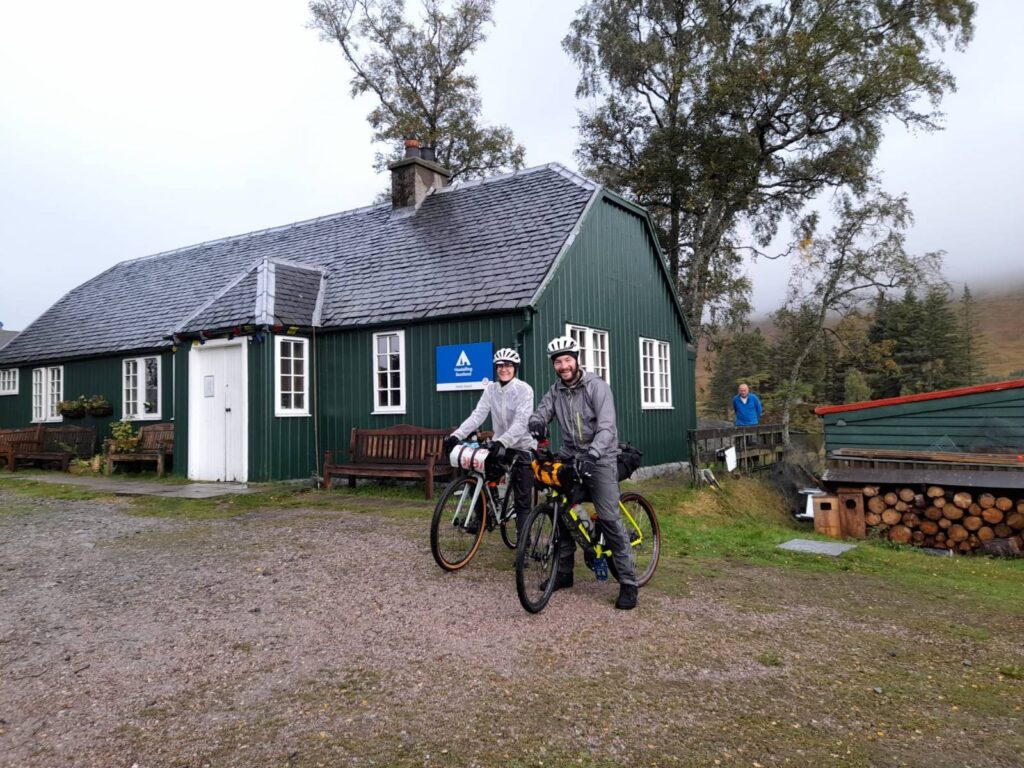 Stoked and ready to roll

We were in amazing spirits after all the warmth, food and lovely hospitality from last night so had obviously decided to push on rather than bail at Corrour. We still had some faster options to Inverness, if the weather stayed miserable and we couldn’t dry kit out, but everything was looking better this morning. After saying our goodbyes, we rode out and noticed the two guys (I think one was Matt, sorry I’ve forgotten names) were camped near an outbuilding and cooking breakfast. We had another chat and probably shouldn’t have mentioned how lucky we got with the hostel while they spent a wet and windy night in tents – sorry fellas! A few kms down the track I realised I’ve left my wallet at the YHA so have to back track but we’re soon making forward progress along Loch Ossian.

Malwinki can’t believe how many mushrooms are on the roadside 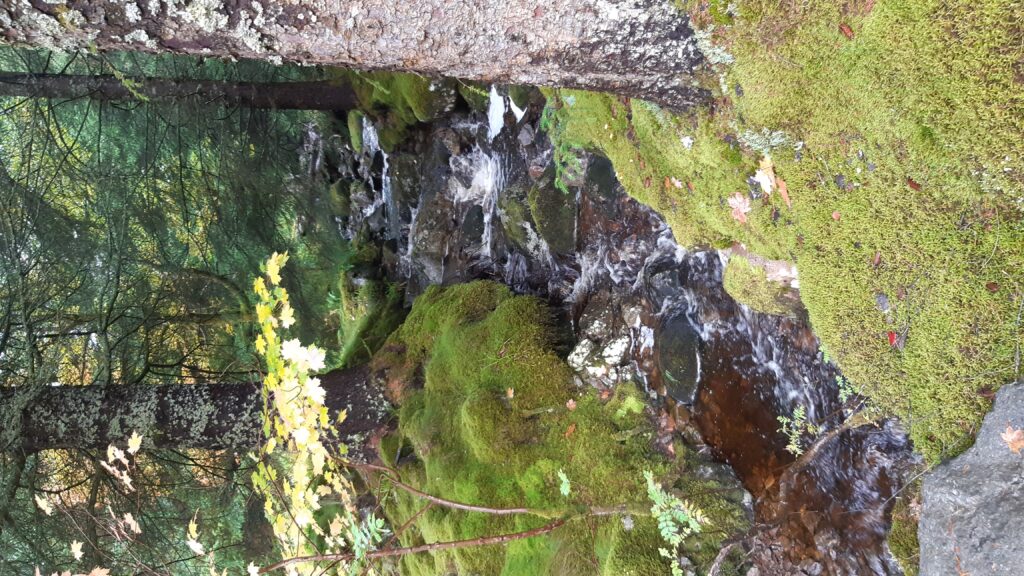 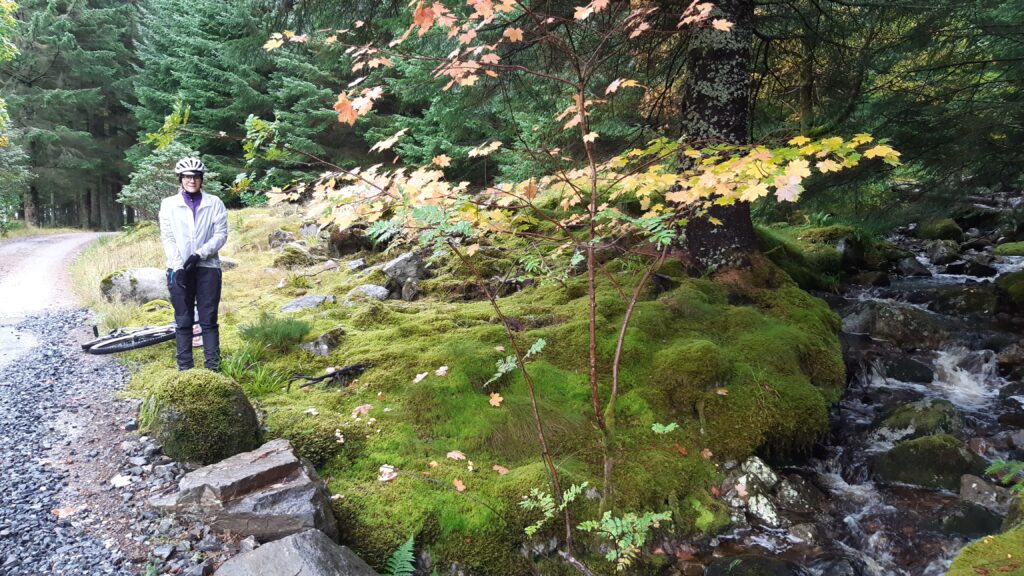 The riding is much easier for most of this stage (at least until Corrieyairack Pass, the biggest climb of the route, around the 50km mark) and the weather seems to be easing. 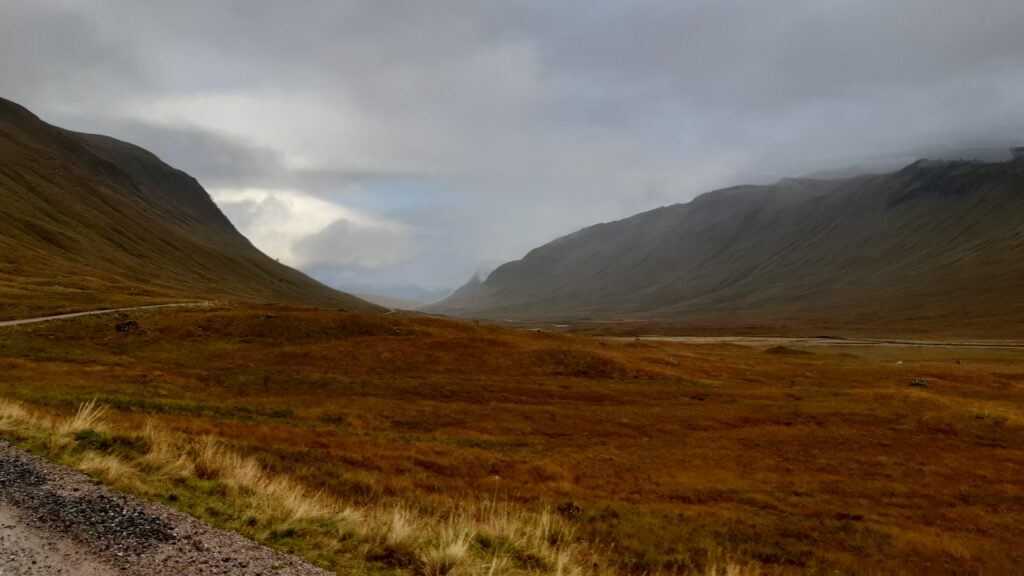 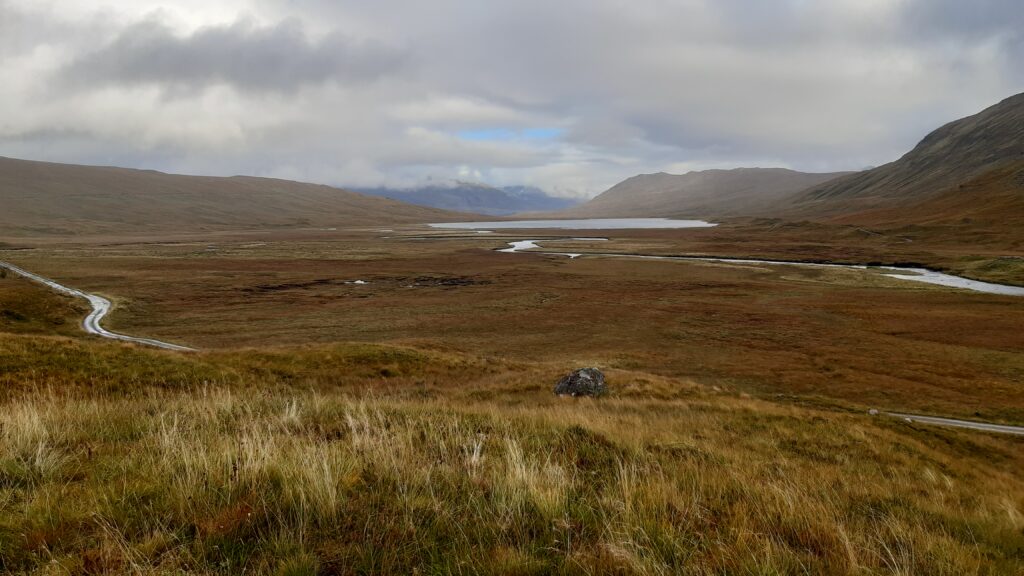 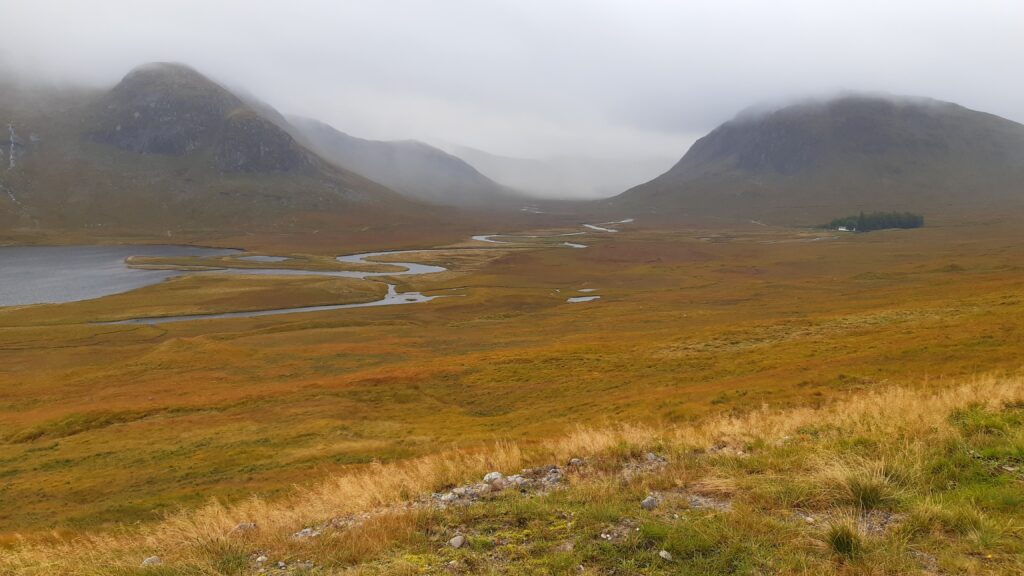 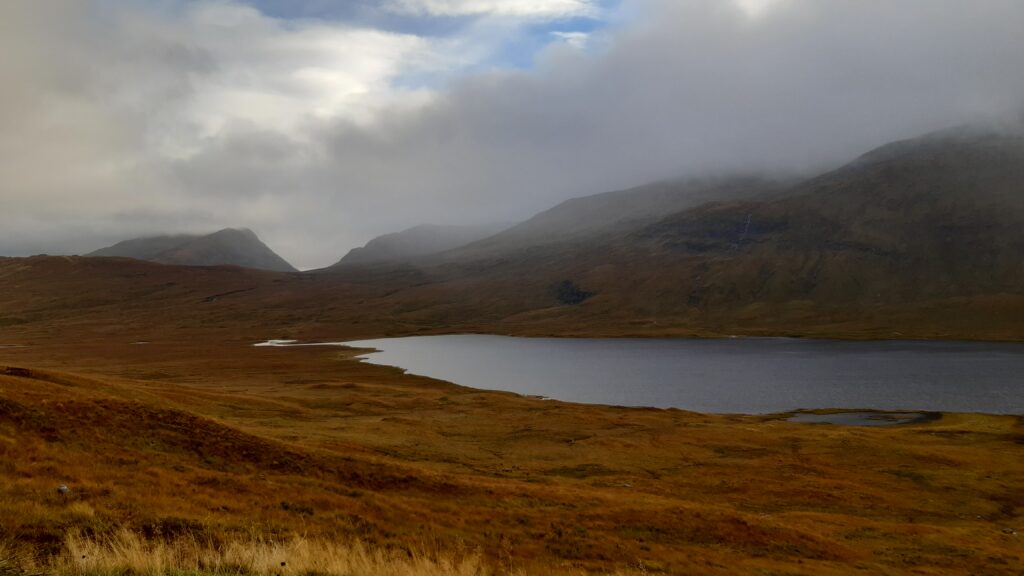 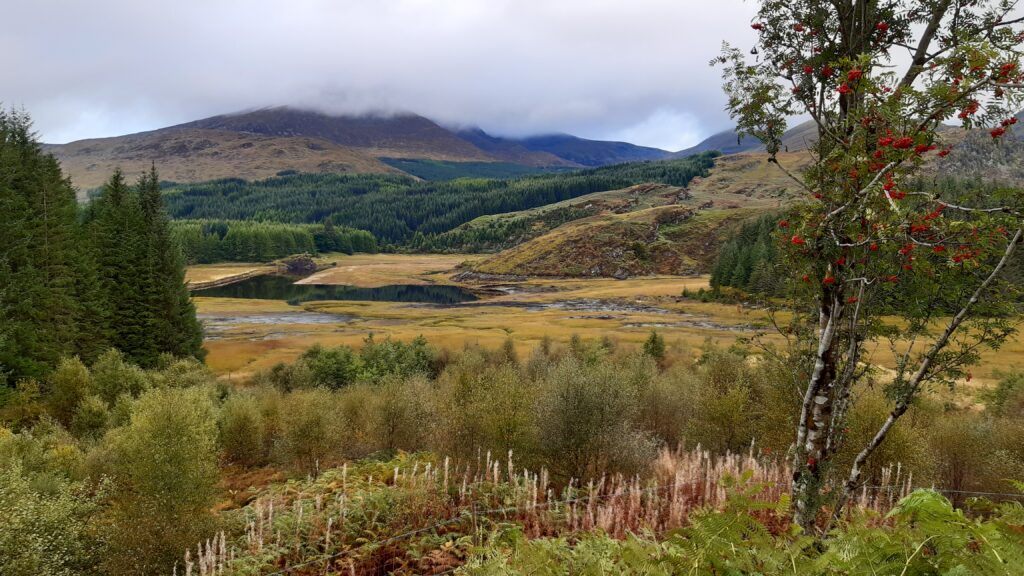 We were paying more attention to minimising ‘hanger’ today so using the notes from the ATM Guidebook – “Loch Laggan, lacustrian sandy beach at Kinloch Laggan, good spot for a break” we take a break and, for the first time, spark up LFGSS member Owl’s camp stove – one of three he’d kindly loaned me to test for this trip. Boiling water with his MSR copy in the 750ml Ti Toaks pot is quick and we make instant cappuccino (not my choice – next time we’ll take something different) and a last minute purchase from Decathlon – their dehydrated spaghetti bolognese. Turns out to be a good panic buy – it’s quite decent and we then clean and reuse the spag bol packets for the rest of the trip, in place of having any of those natty folding plastic bowls (mmm bolognese-falvoured porridge). 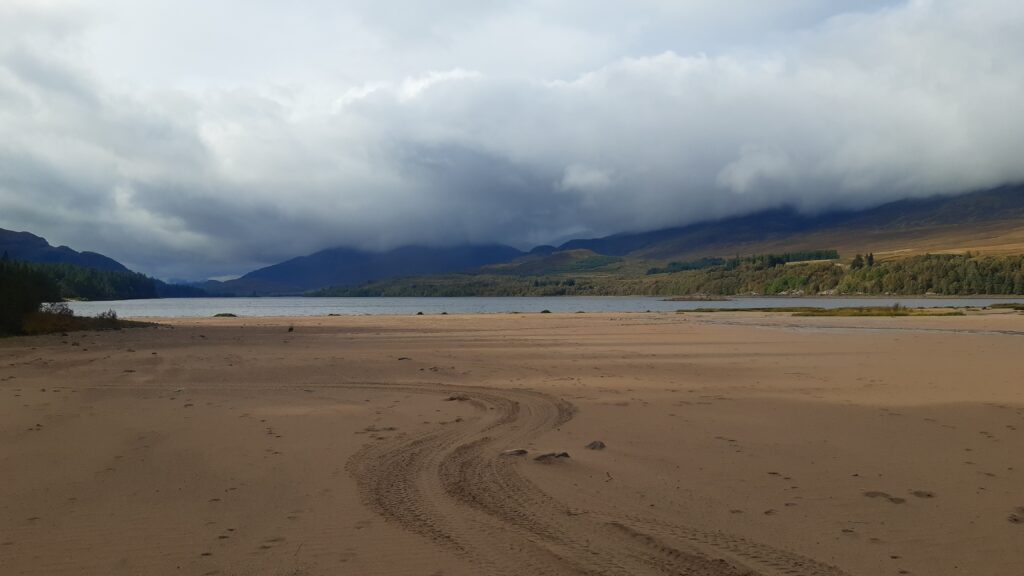 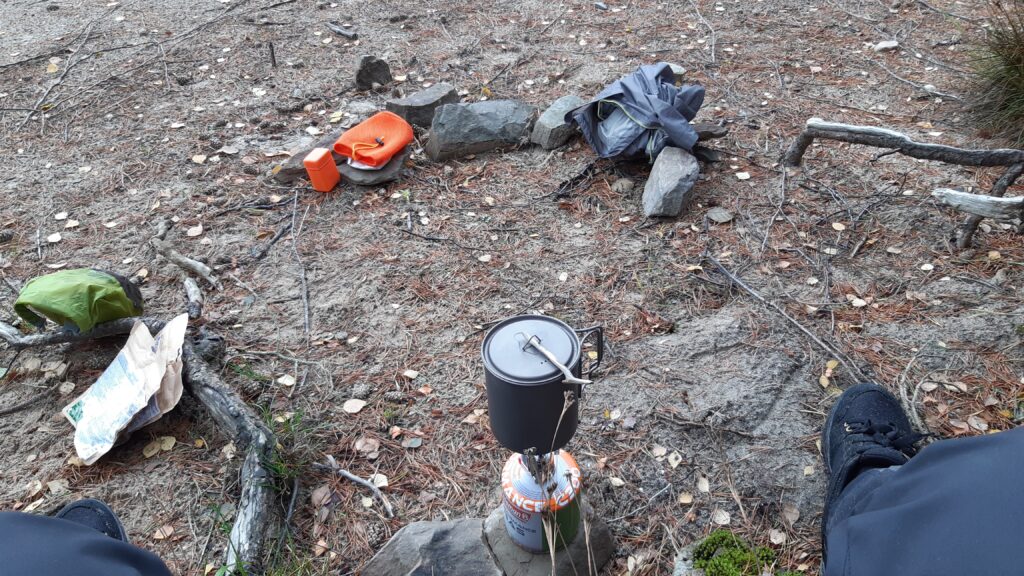 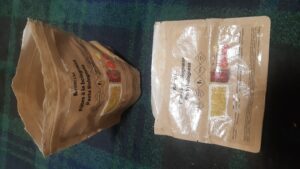 There’s a 10% off-road climb out of Loch Laggan and then there’s some lodges to ride through – one filled with deer – so ride quietly if you want to see them. 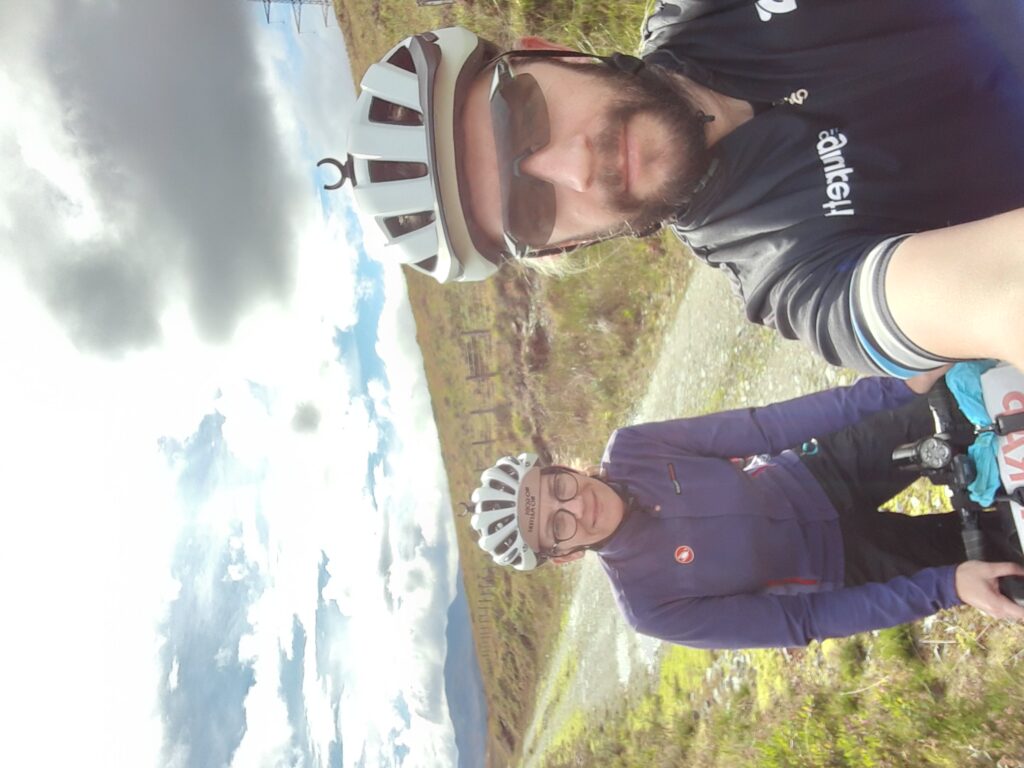 Sun’s out, guns out 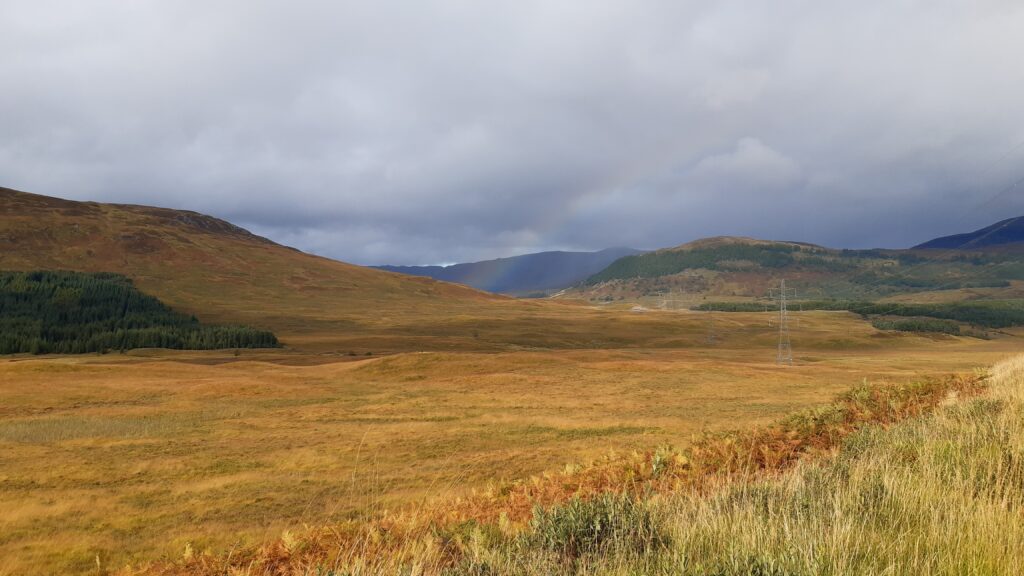 Another rainbow but the weather is better today

After some road sections we were soon at the base of the day’s dread… Corrieyairack Pass, the biggest climb on the ATM route at 770m elevation. There were lots of stream crossings and stone-edged drainage gullies. Some were shallow and easily rideable, others were deep enough on the high side that it made sense to jump off the bike and walk over or around. We’d heard horror stories about this climb but I didn’t think it was all that bad (Malwinki might have a different opinion – she looked a bit trashed on this climb). Sure, it was long and the hairpins at the top are very steep but it’s so much easier to walk these than ride. I was doing the same speed walking as riding but my lower back was much happier not having to do 600W around each hairpin corner. 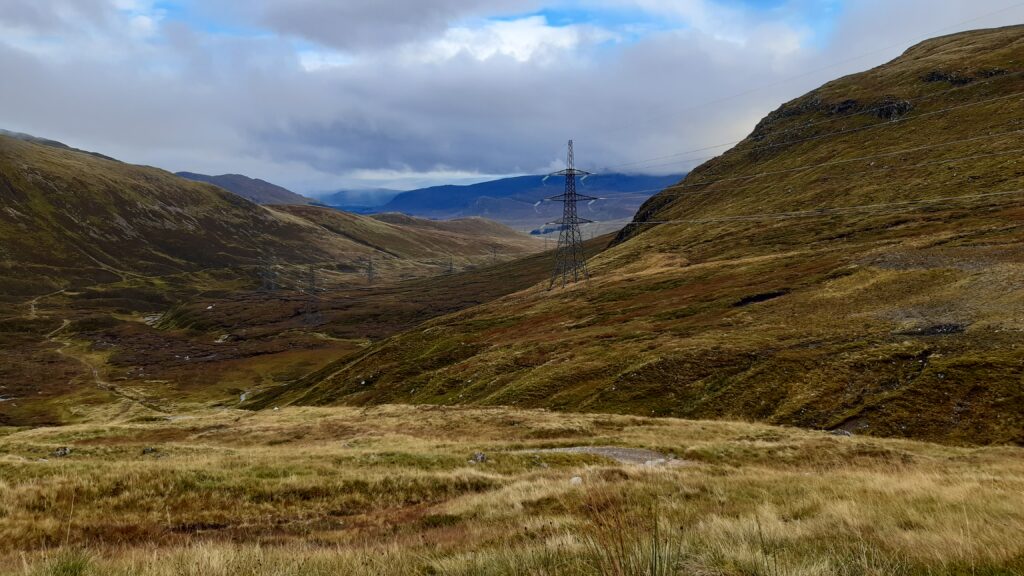 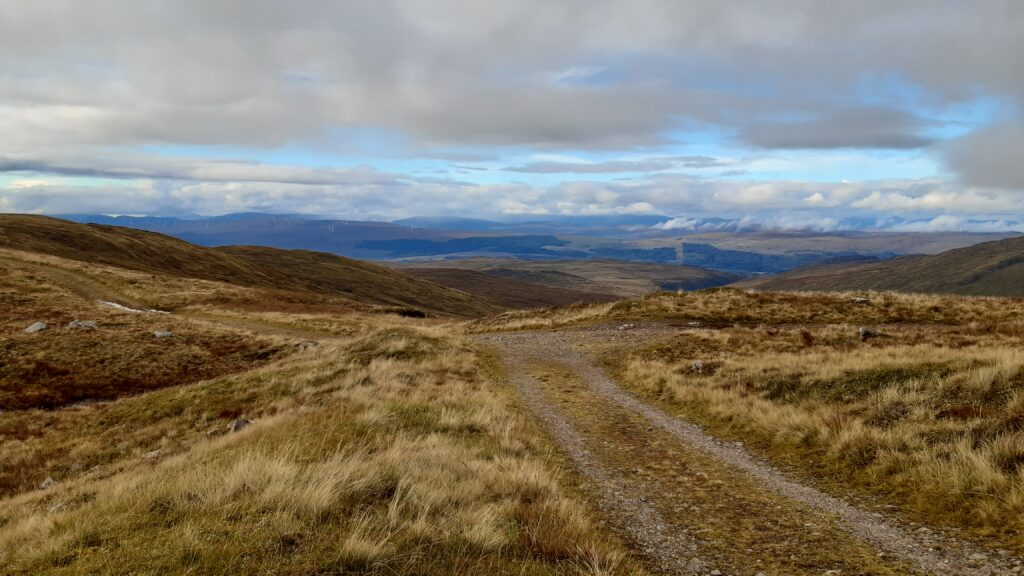 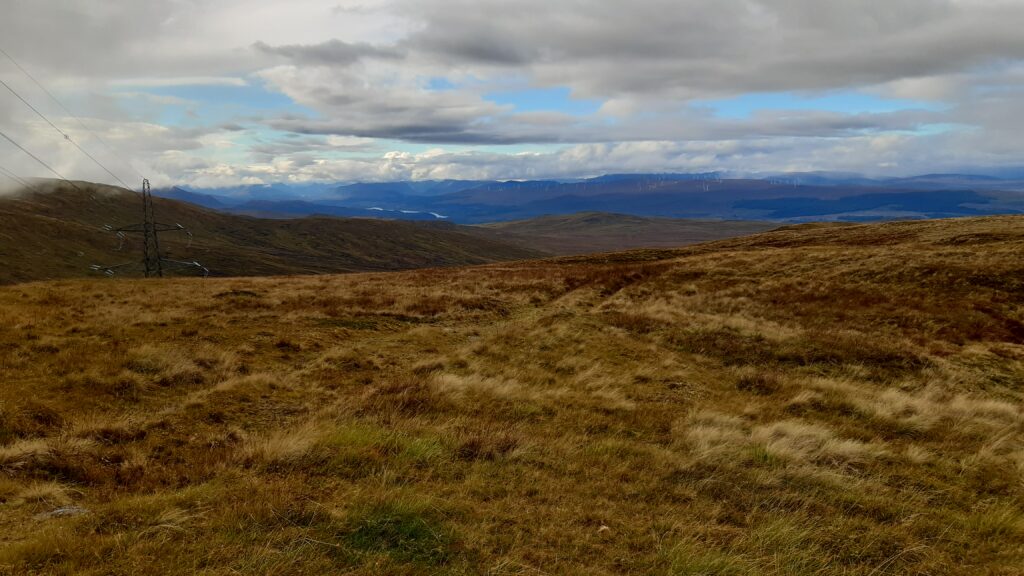 The top of Corrieyairack Pass

Having crested the top it was a fast and loose descent down towards Fort Augustus. 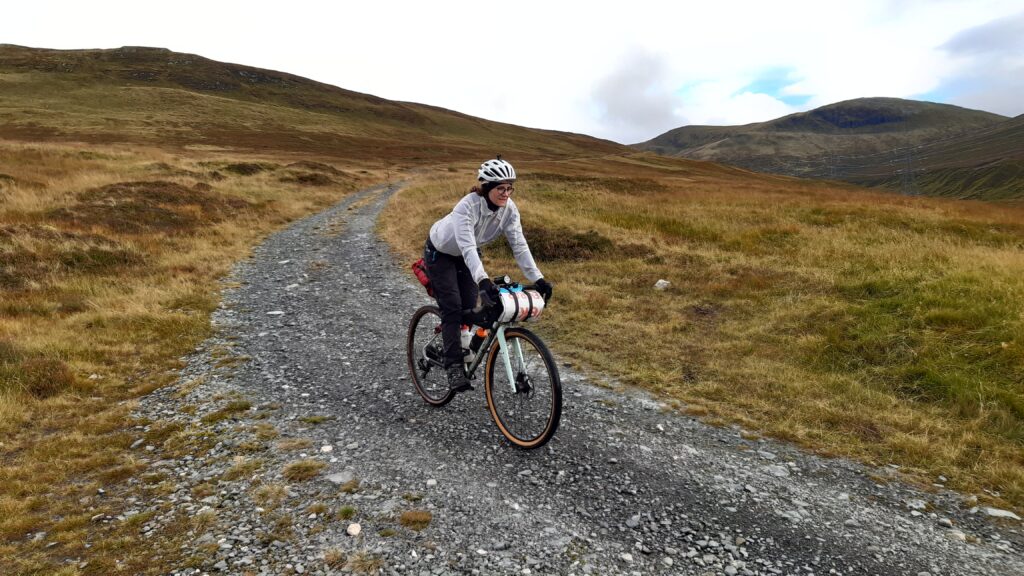 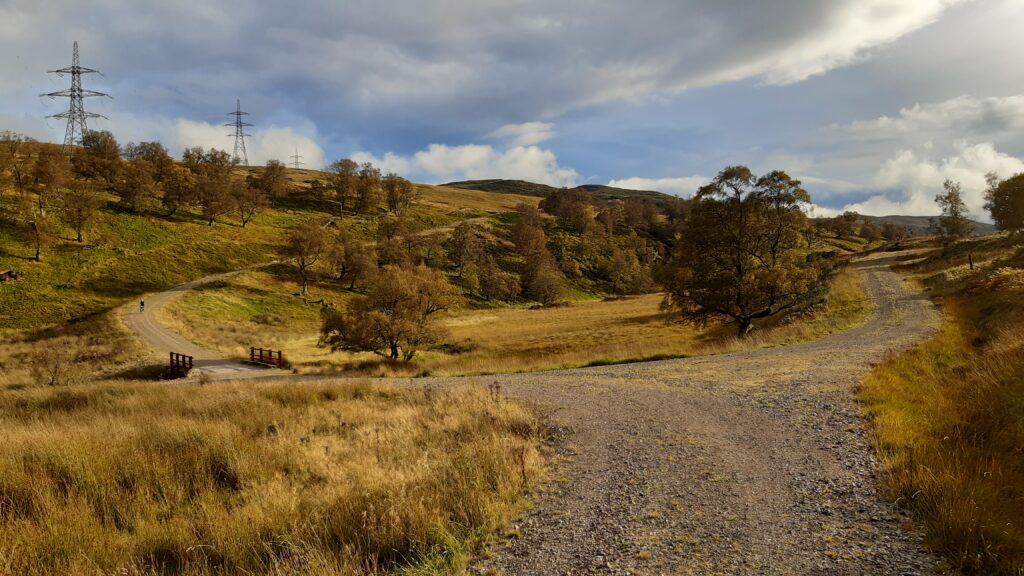 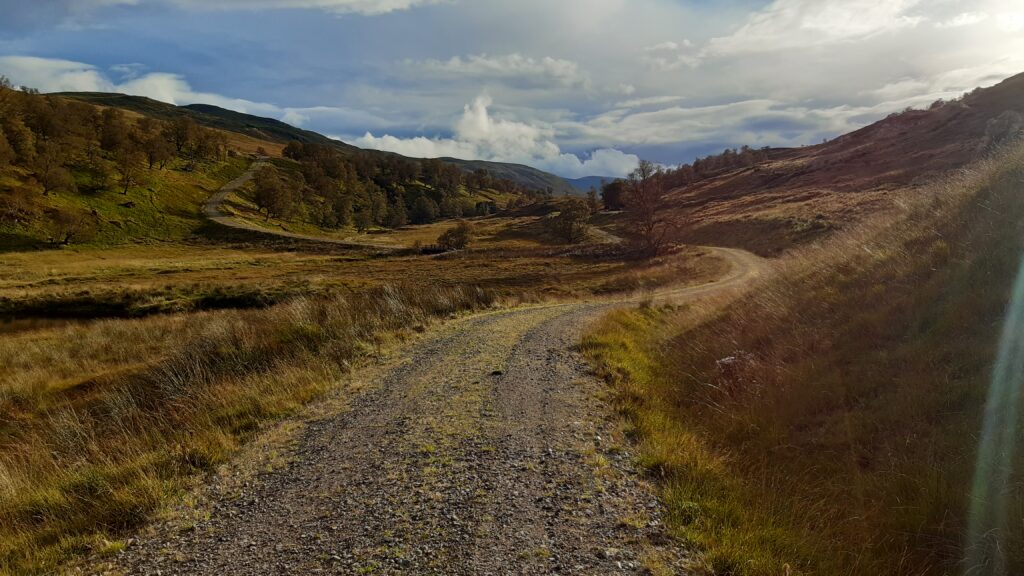 Who put this climb in here?!

There were some navigational hiccups as we got closer to town. I looked at the files when we got home and we seem to have three different routes into Fort Augustus. One of them clearly wasn’t right as it tried to go through the grounds of this pink place which is private property. 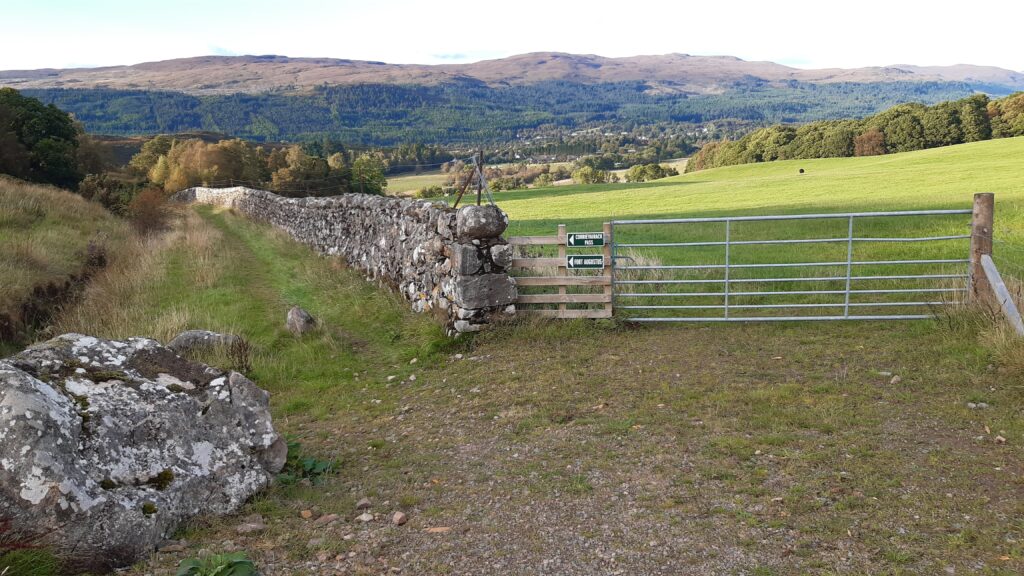 After a few dead-ends and some hike-a-bike through a cemetery (technically another ‘dead end’?) we finally cycled into Fort Augustus and straight into a Londis to inhale much needed food and drink while checking phones for (roofed) accommodation options. We settled on Morag’s Hostel which happened to be the cheapest and closest option, just around the corner from the Londis. After some price querying we were checked in to our own room and promptly turned it into a massive drying rack. It was here we noticed the cables on Malwinki’s bike had eaten their way through her Topeak Frontloader handlebar bag. It has a weird arrangement where the curved harness part is out front rather than the Revelate stuff which has the more solid part at the back. Anyway, we patch this up with Gorilla tape for now, but we’ll need to find a better solution – her brake cable splitters also ended up damaging the head tube paint on her bike. 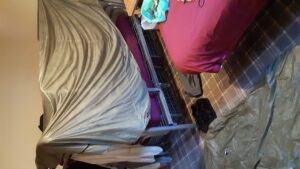 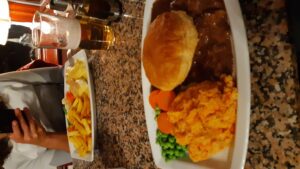 After cleaning ourselves up we headed back into town and had a huge feed and some brews at The Bothy pub. We met the boys again (they’d sensibly got an airbnb and were probably madly drying stuff like us) and this was where they diverted off the ATM route so we wouldn’t see them again. Much fuller and happier we had a nightcap in Morag’s bar and then hit the sack.