Day 4: It’s back on another historic trail, this time its Major Caulfield’s road. Built in the 1700’s the ‘road’ provides excellent single track to Glenmoriston. The new power line track creates a great off-road link after another big climb to beautiful Glen Affric and its ancient twisted Pine trees.

​Day 5: The Corriehaille hydro scheme rough tracks are followed all the way to Contin where the trail joins the ‘Strathpuffer’ forest cycle trails to the historic Little Garve Bridge and onwards via forest trail to Inchbae.

We grab (not literally, remember we’d had dinner) the woman cooking breakfast at the hostel and she says she can do us some breakfast rolls, fruit, cereal bars at 8am so we have some coffee, pack up our dried kit and tuck in to the food when that arrives and then set off. The trail continues right behind the hostel, with a reasonably steep set of soggy switchbacks up through the forest on Caulfield’s Road. It’s steamy work in amongst the trees but eventually we pop back out onto dirt road. 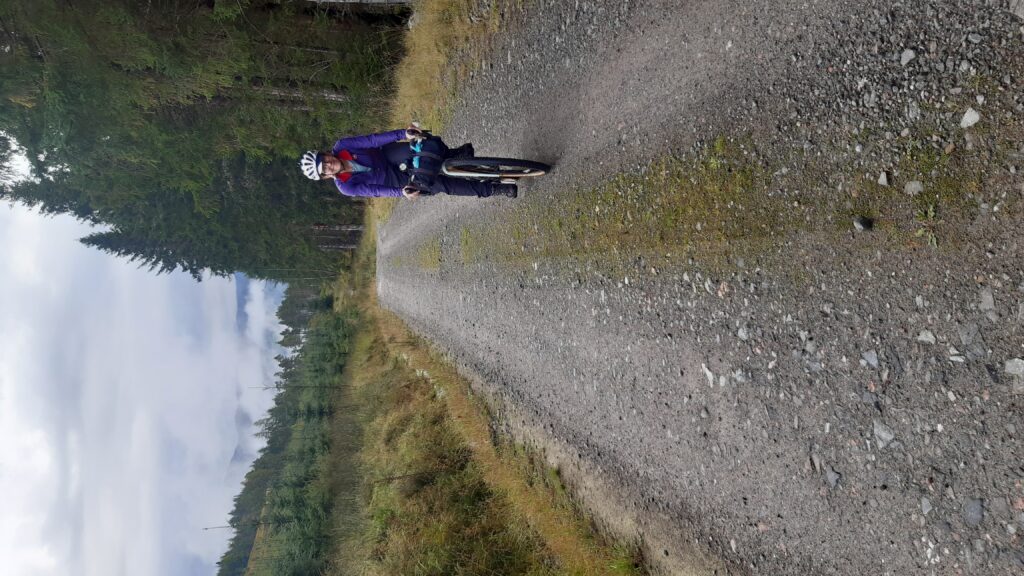 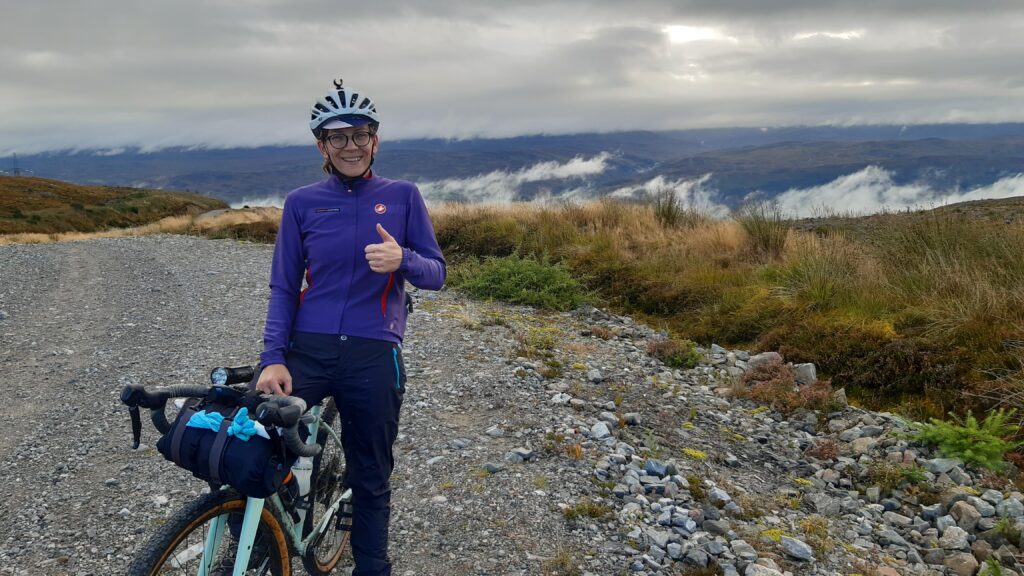 After about 7km, the route turns left onto some bumpy singletrack and in here there’s a “4m stream crossing” which thankfully wasn’t in spate so no detour required. If you’re careful, you can keep your feet dry… ff you’re me, well, top marks for my Dexshell waterproof socks. 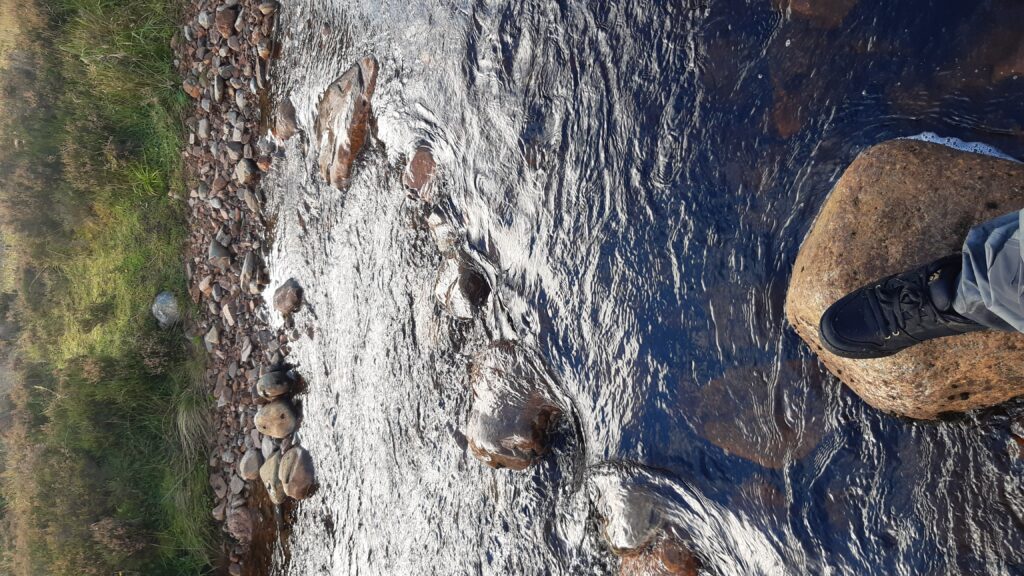 Singletrack between Fort Augustus and Glenmoriston

After the singletrack descent we took the ATM guidebook’s suggestion and rode a mile further down the road to Redburn Cafe in Dundreggan. Here we had some coffee and cake (scones w/ jam and cream for me) for morning tea and grabbed a couple of sandwiches to pack away for lunch. The guidebook mentions that the Estate has blocked the gate behind the cafe but my GPS route still used this blocked way so we found ourselves having climbed up to a locked gate. We had to ride back down past the car graveyard onto the A887 and use the next turn, just before Tomcrasky Road, near the red phone box. There’s also a gated trail in between these two tracks but a loaded bike doesn’t fit through (see pics below). 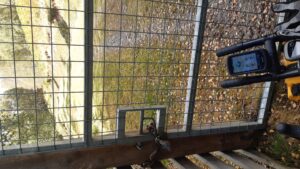 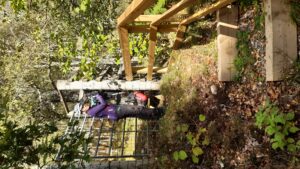 Now there’s another decent climb past some logging trucks and then it opens up and you can see for miles. There’s some blue sky and it’s hot enough work that the waterproofs have to come off (so nice not having clammy waterproofs sticking to your legs!). There’s lots of photos of ‘someone’ walking but I’ll not post those to protect the innocent. Walking is no bad thing up here though – the views are stunning. 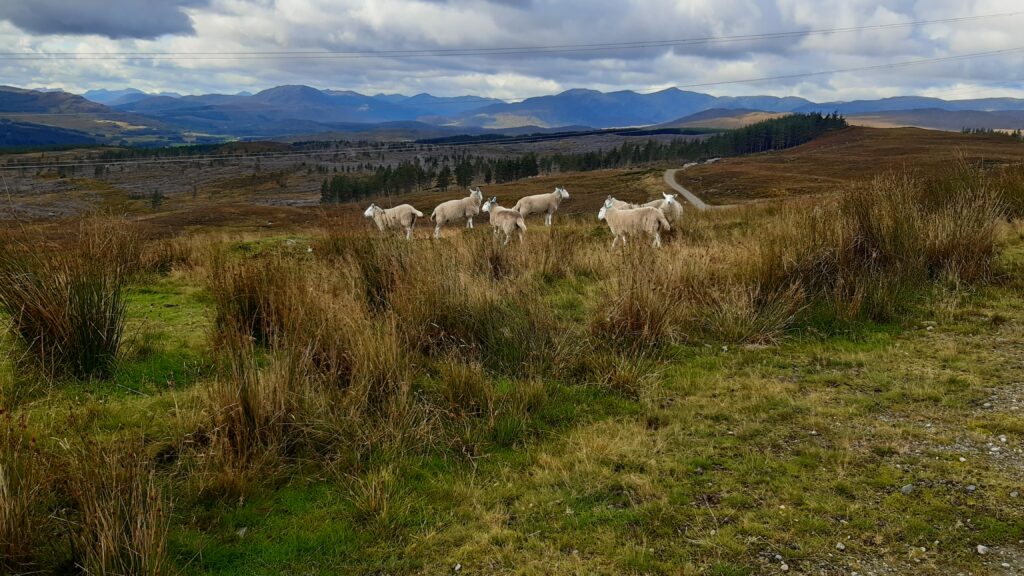 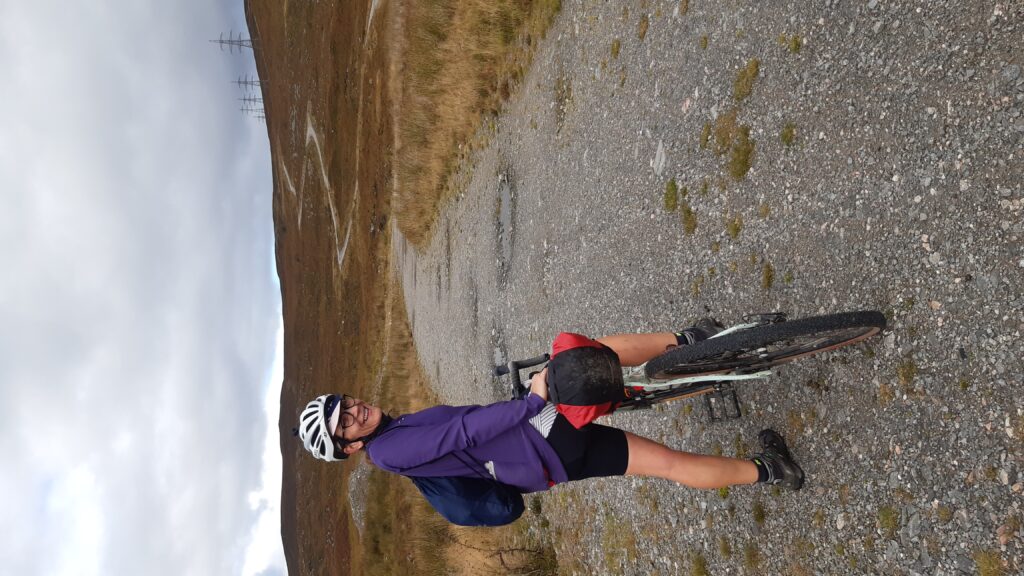 The joy of not wearing waterproof trousers shows 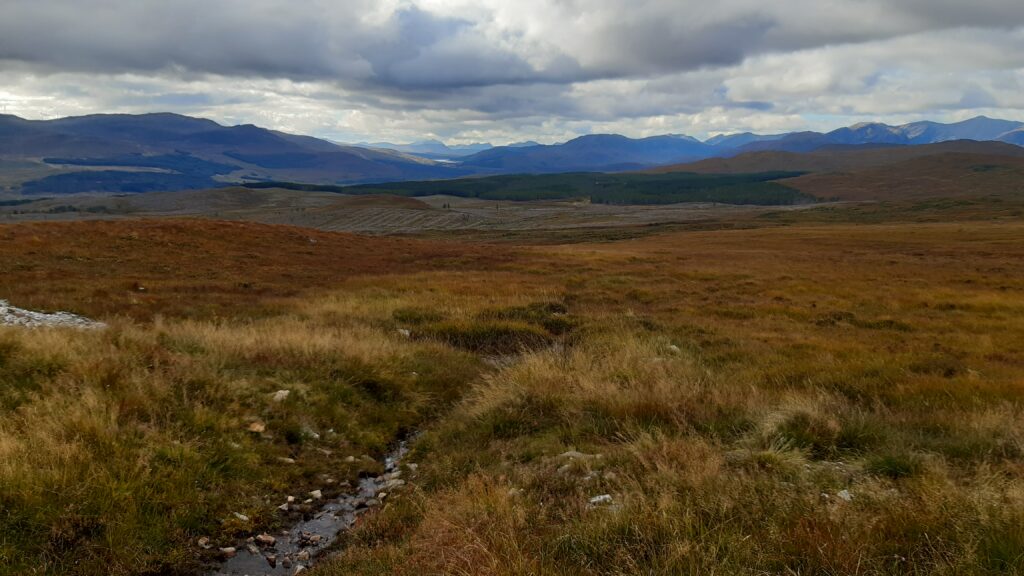 Ben Nevis in the distance? 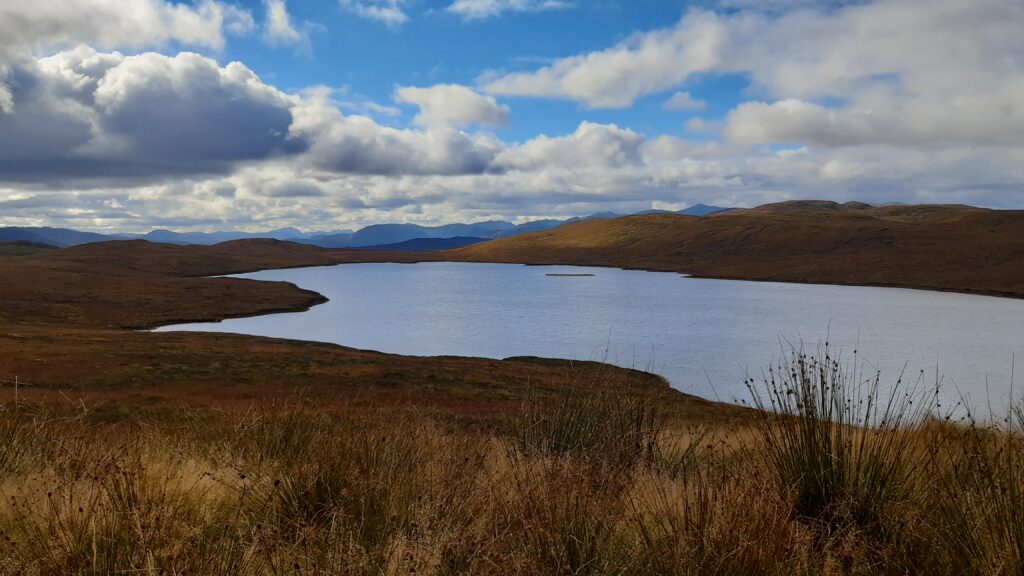 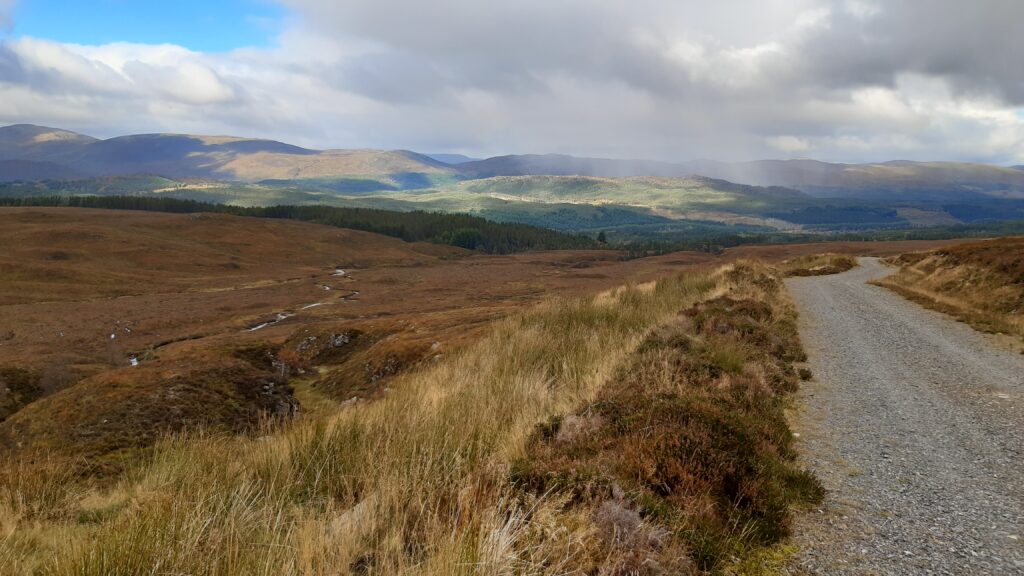 From here it’s 10k of open and forest descent down into the village of Tommich, where we stop for refreshments, remembering my rule of, ‘if food is available – eat it’. We get lucky for a change and as soon as we’re inside the skies open and a big shower hits. 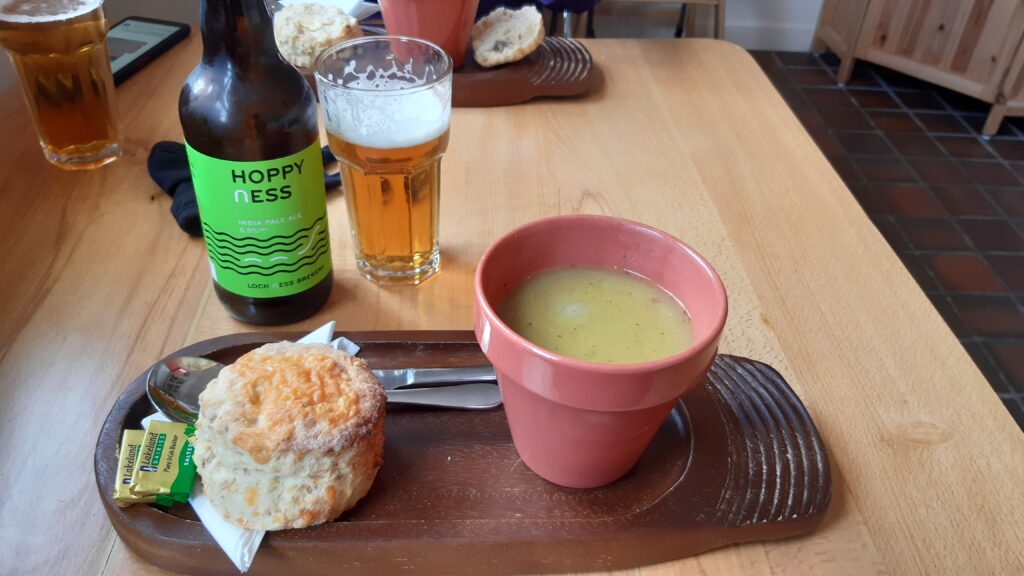 Because we had now decided to push on and it’s likely to get colder and/or wetter, we revisit the ‘crappy glove’ issue and decide to try and buy some Marigold washing up gloves to supplement our existing gloves. There’s a Spar in Cannich, which is only 5k further along the route, just over the river so we head there. On arrival, Malwinki points out an Aussie flag sign in the window but I think nothing of it. Then I spot a can of Solo (light on the fizz so you can slam it down fast) in the fridge. Every Australian should be familiar with this drink. It turns out, the owner is a Sydney woman and she runs an Aussie food import business and has an Aussie section in the Spar! What are the chances?! We only arrived here for washing up gloves (which we found and bought) but we left with an arm load of Aussie treats. 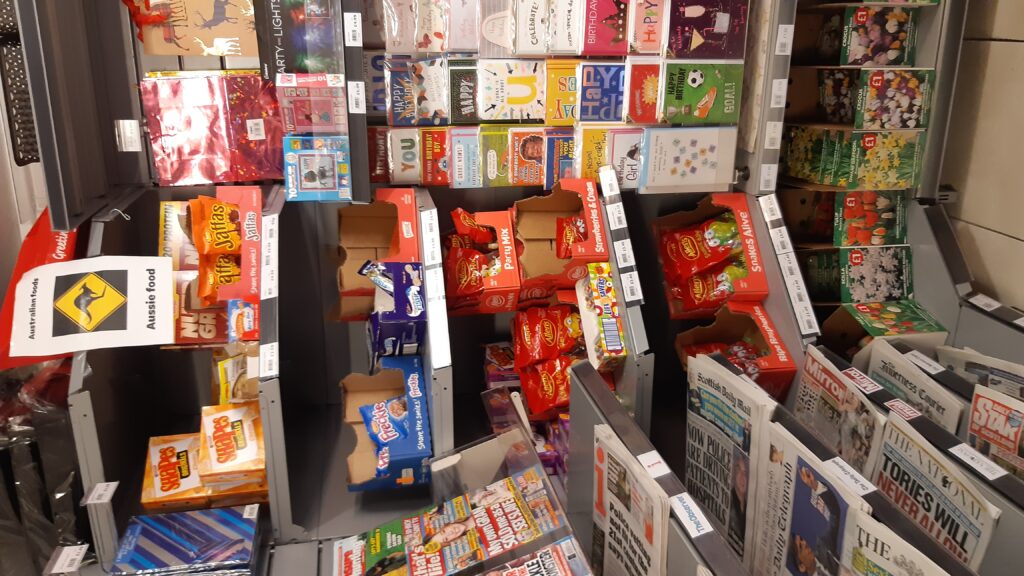 Cannich also has a Teapot Fairy 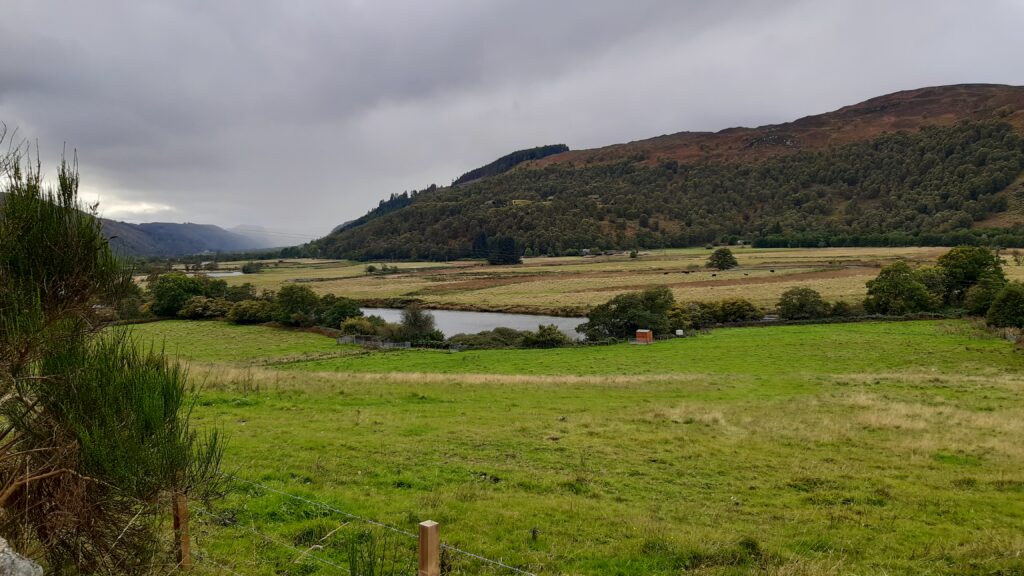 Another shower misses us after leaving Cannich 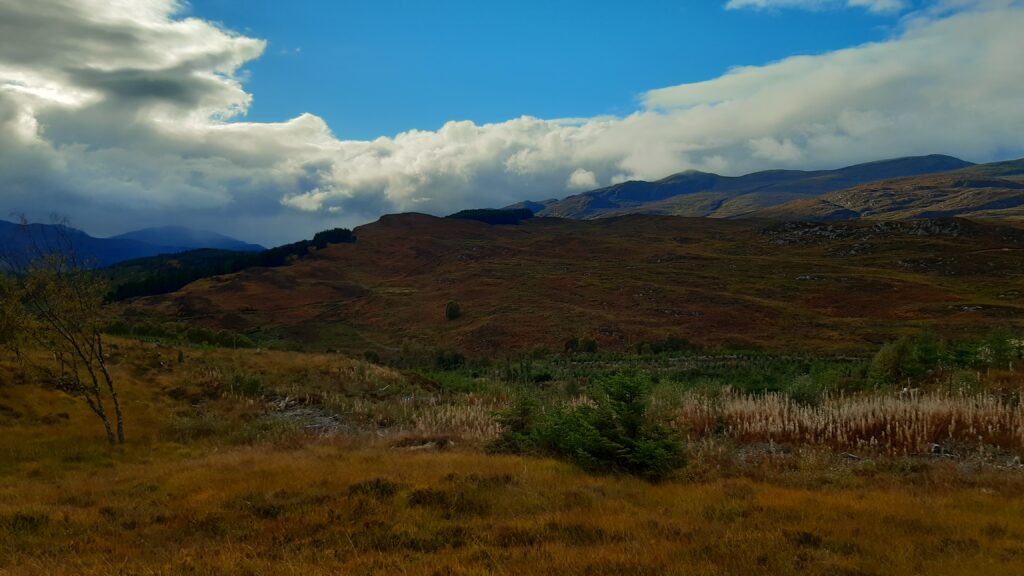 At some point we’ve looked at the remaining flat route for the day and decided, since we still have 3hrs of daylight left and the weather is nice, we should push on past Struy and into Day 5 of the ATM guidebook route. The climb is tough but the views are rewarding. 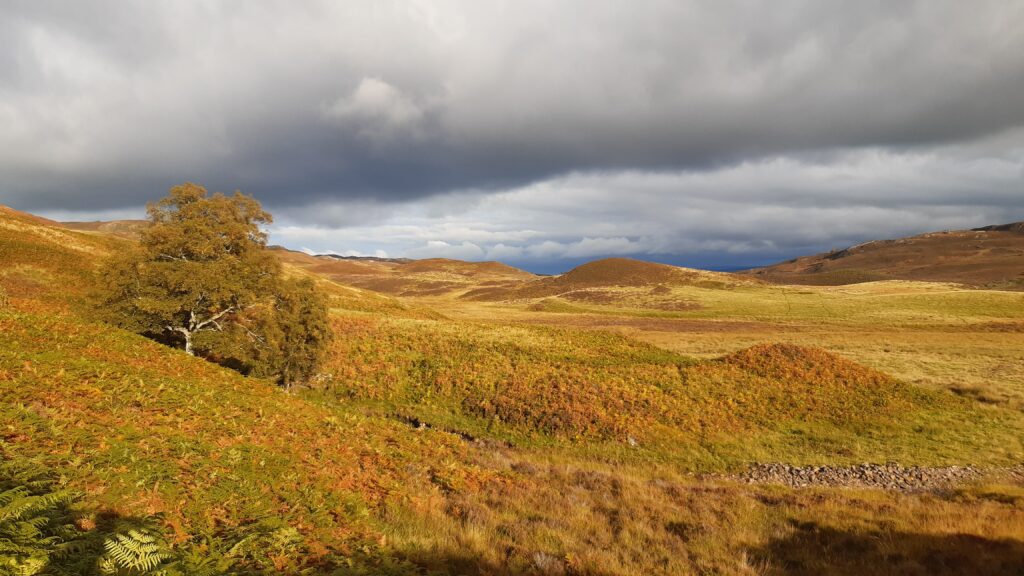 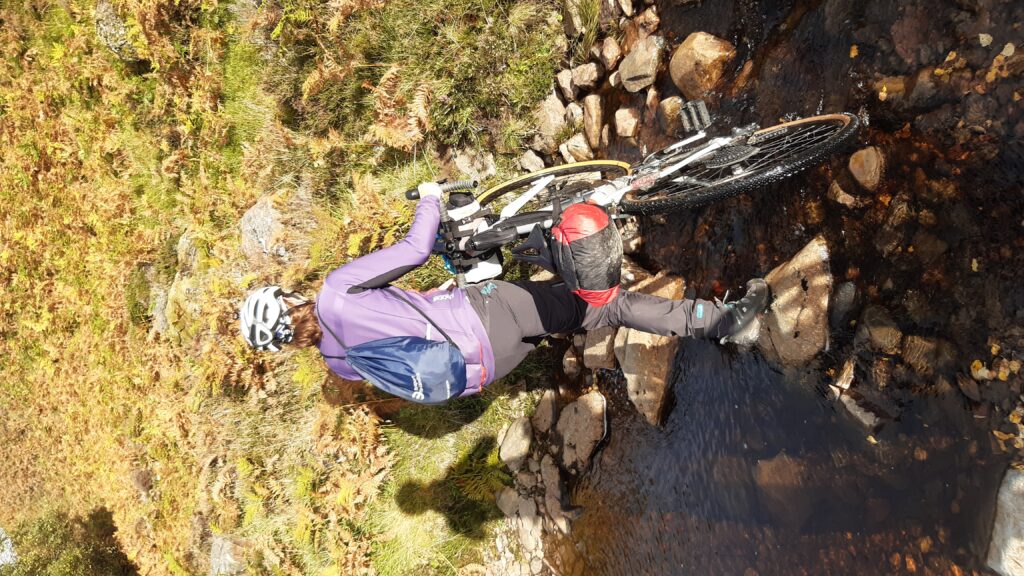 You can see why “hydro” schemes are popular in Scotland 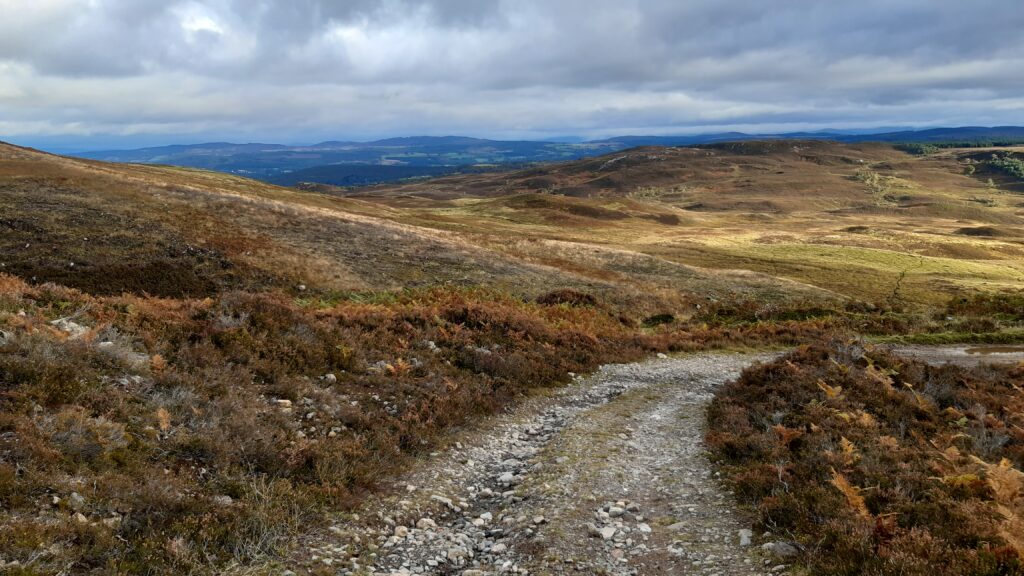 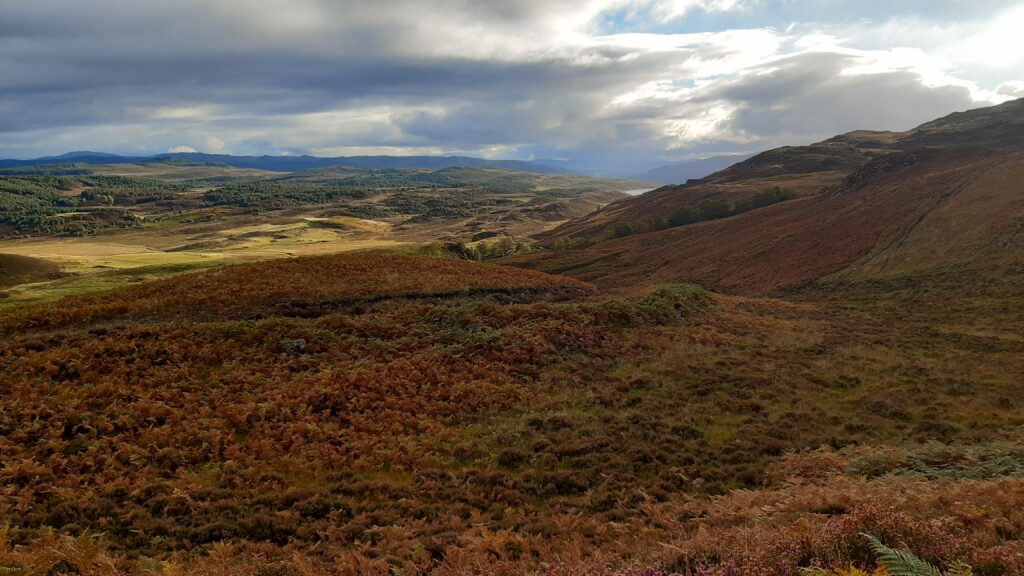 The tension starts to mount when we realise the descent isn’t going to be a fast one and that ‘3hrs of daylight’ becomes 2hrs. 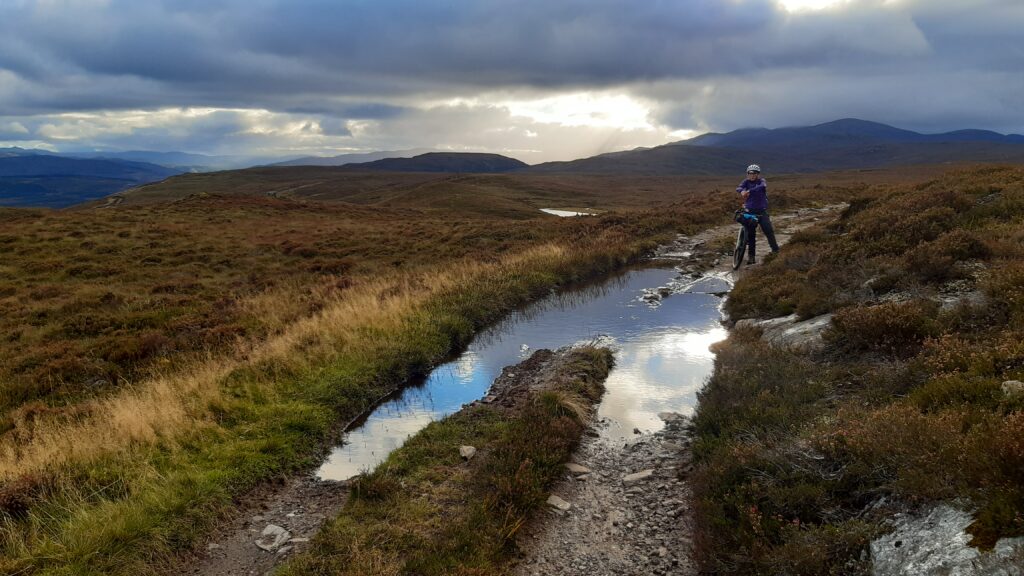 Not the rewarding descent we had in mind 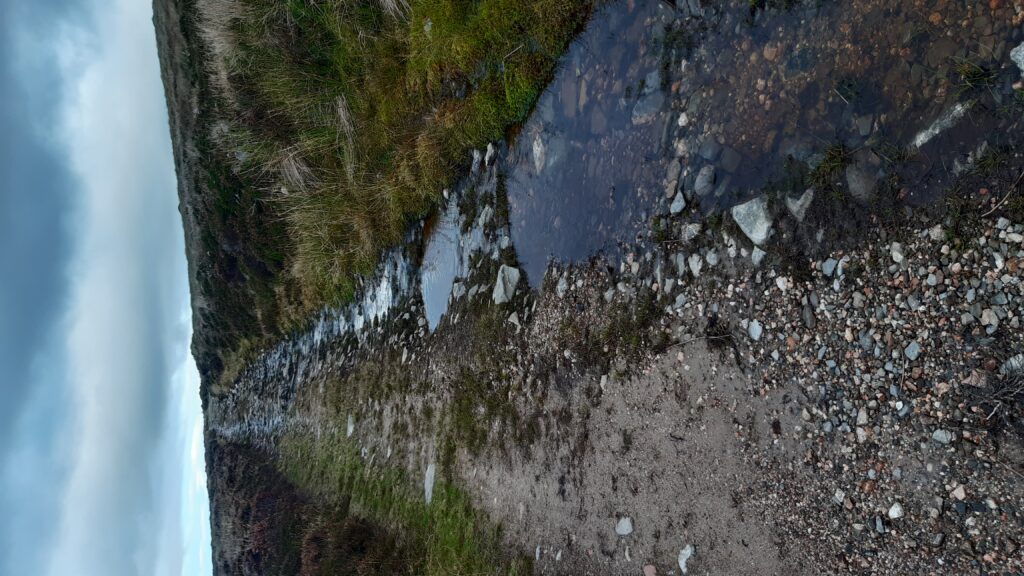 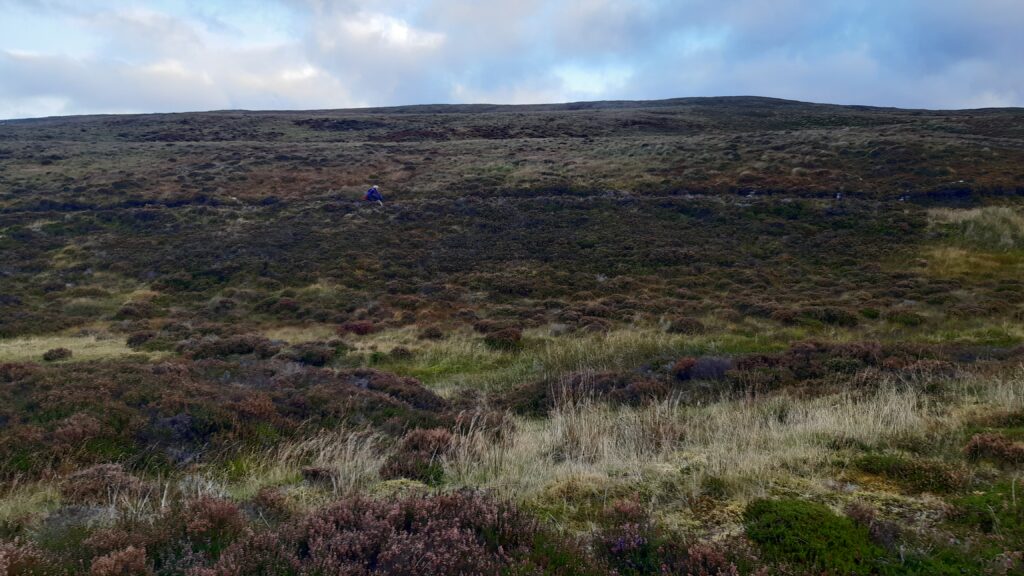 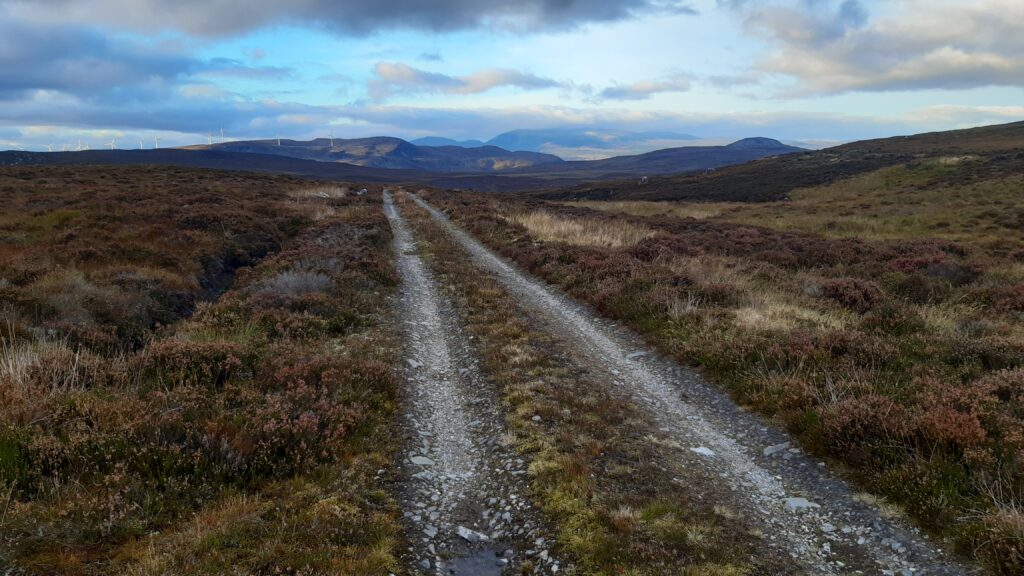 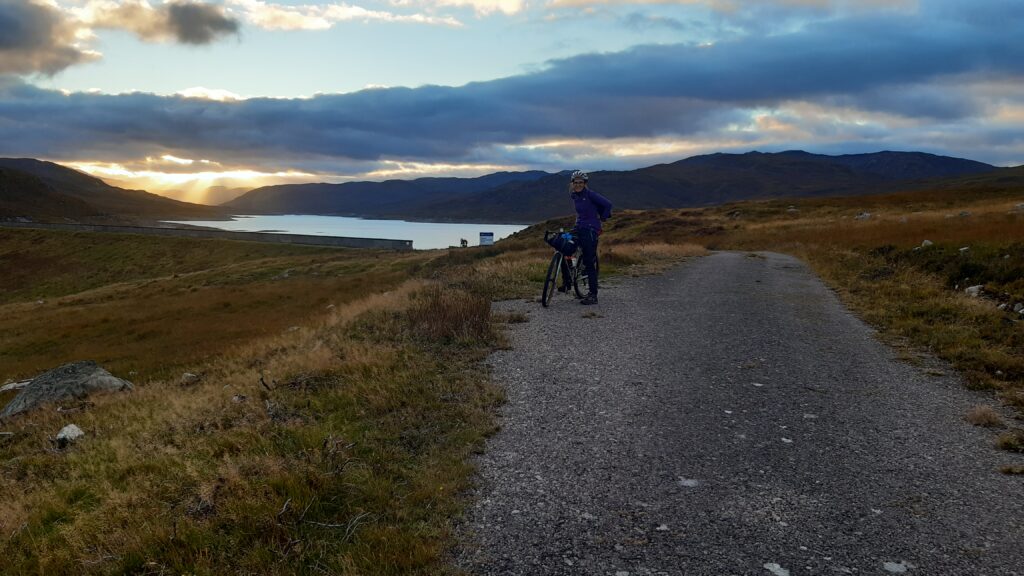 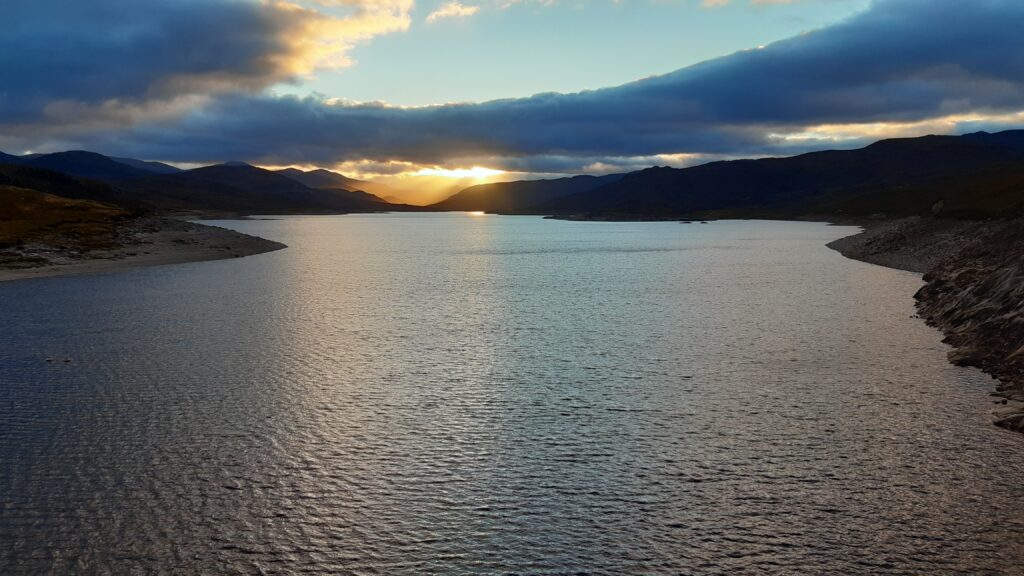 We haul arse down the smoother and drier doubletrack, snap some pics at Orrin Dam (1hr of daylight left) and then zoom down the paved road to Marybank. There’s not much in Marybank so we head onwards to Contin to see if the Riverside campsite is open. It’s not, but Contin Stores is, so we grab some snacks, beers and everyone’s favourite camp food – Pot Noodles! We ask the nice woman running the shop if she has any wildcamping suggestions. She does and we decide to use the closest of them – Contin Forest – just a couple of km away and on the ATM. I don’t have any pics of it but I think we actually set the tent up with some remaining daylight (always helps) and then used the handy Forestry toilets to clean up and change into warmer clothes while cooking up a little feast (ok, Pot Noodle, Cup-A-Soup, the lunch sandwiches, beer and random snacks) with the stove. 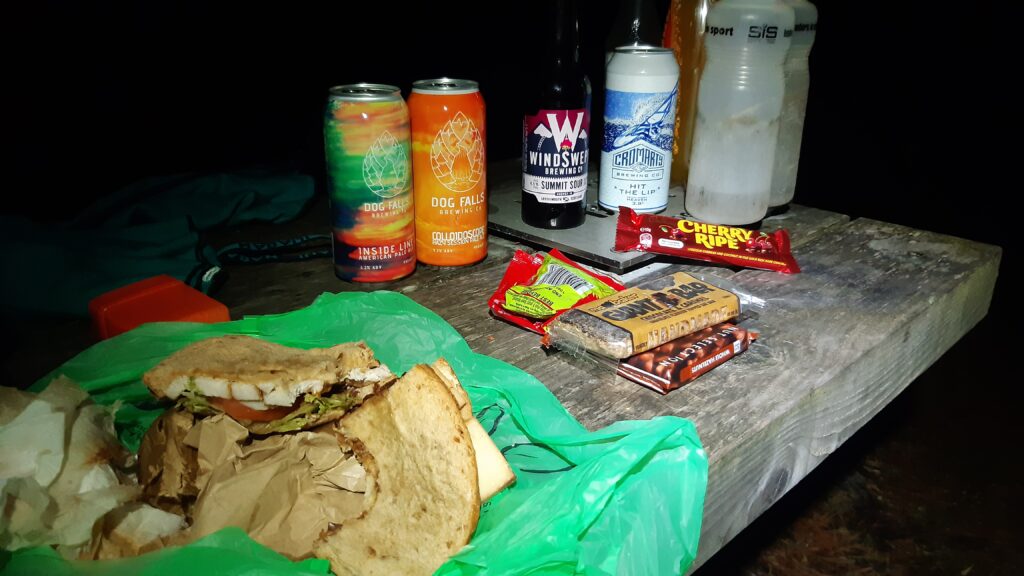