Skip to content
After last minute packing and more Amazon orders than you can poke a stick at, the day of departure arrived and I rode to the Eurostar station while Mal caught the Tube over.  Bike was swiftly checked in to Eurodespatch where I met another rider, Dan from Leicester. Off to Brussels we went!
Grabbed the bike from the train bloke (met Josh Rea from NZ/China) and hopped a train for Ninove where we’d booked a room, since Geraardsbergen was full up with other racers. Mal hadn’t been to Belgium before so we had a little bit of an explore while I drank all the beers I could find.
On the Friday morning we headed to Geraardsbergen on the train and went through registration, where I picked up a Spot tracker that would allow all you virtual stalkers to watch me flail about Europe for two weeks.
Grabbed some more food and more beers and relaxed. I was way calmer before this event than most of my TTs oddly enough.
Had a chat with Ultan, xkittyx and Frank Proud and probably some others (oh yeah Stu, who knows Jilko and said g’day which was nice) and before I knew it it was time to change and head to the start.
Into the bogs and on goes the chamois cream, bibs and knicks and my brand new Castelli jersey fails before I even get to use it – I will end up doing the whole race with an arm gripper hanging out of my sleeve – so much for more aero.
The start was busy with riders and spectators and was a neutralised loop around town while the spectators went up the famous Muur climb with their flaming torches! I remember speaking to US guy who warned me about potholes somewhere on the start of the climb – thanks dude! The countdown happens, the race starts and I slowly roll out behind 200 other racers. I’m wary of ‘racing’ anything this early and just want to get out of the crowds safely. Up the climb I’m grinning like an idiot and I spot Mal and try to highfive her but highfive James Hayden’s dad instead – still cool – we’d been chatting before the start. James was a favourite for this race – he’s young, quick, lean, and especially motivated after smashing the early stages of last year’s event but ultimately failing to finish.
I avoid any drama and immediately separate from everyone (quickly pushing away any navigation-related panic, I’m heading in the right direction, stay calm Captain Directionless!). Then, almost as quickly, I’m back with some other riders after a junction and all of a sudden my lights turn off. Shit! Stop and see the hub has rotated and the  connector has popped off. Quick fix to spin it around and tighten skewer. Lights back on! Crisis averted! Woot!

Bit of a blur overnight, seeing other riders now and then but my path is further west than most others in order to miss out some climbing. For much of the night/day I wonder if it was the right move but had I left the first checkpoint at Claremont-Ferrand when I’d arrived instead of wussing out and sleeping, I’d have been in 4th place!

During the day I have memories of it being quite warm, eating lots of junk food when I could actually find shops and my saddle already starting to hurt me. Not good. I can race >830k in 24hr and my other ISM saddle is fine. The PN1.1 that hurt me during PBP is doing the same again. Oh crap. This is what happens when you don’t have time to prep and test a bike before a race and have to use what you’ve got. In my case, ‘better the devil you know’ does not apply to saddles!

At some point I manage to find some ridiculous sandy track and it quickly becomes totally unrideable. My two week long mental breakdown begins… “Haven’t seen single open shop since start. Water gone. France, wake up!!!“…  “Found dam to wash cleats out and bar for espresso. All good. Sore back. Slow going. West route sucks. Shoulda stayed with ‘peloton’.“… “Lost to fuck. It was only a matter of time.“… “Civilisation!!! Food, water, tarmac on most of the road. Hallelujah! 🙂“.

After 12 hours not seeing any riders or any shops I finally find a town with open shops and smash coffee and pepsi and cake (a Paris Brest cake to be precise) into my face hole. Soon after… “Carrefour lunch. Such yum much taste. Shorts seem to have turned penis into mince. Bit earlier than expected. :S” and “Tendon in front of left ankle playing up again. Can’t push big gears.” but on the flip side “Really nice roads in the Loire Valley.”

“27 degrees. need to find food before night. For all the credit French food gets I wish it was actually available.” and then a 3 course meal in St Pierre le Moutier!

I make the CP1 hotel at 4:30am and although I could’ve gone on and been in 4th place I decide to be sensible and sleep since it’s >24hr awake already and there’s 3500k still to ride! I check in, faff a bit (“Don’t tell hotel guy but I used his scissors to cut off my pubes to tape raw bits. #TCRNo4 #TCRNo4S142“) and set alarm for 2hrs. Wake up after 1hr – wtf?! Okay, may as well get going then if you don’t want to sleep, human.  It’s raining as I climb the required parcours up Col du Ceyssat. 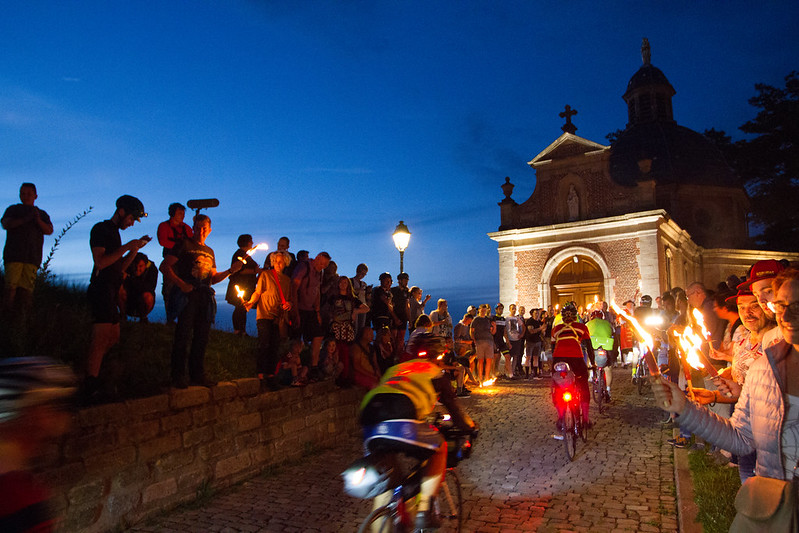 Thoughts on the 2016 Transcontinental ‘route’.