Right, where was I? Oh yeah, the CP1 hotel. Ultan and Mike were dozing in the lobby when I arrived. I got my brevet card stamped and decided to eat some stuff from the hotel and get some sleep so checked in. If I had’ve left then, I would’ve been 4th rider on the road. Next time, Gadget, next time. I’d set my alarm arbitrarily for 2hrs. I can’t remember but probably showered and did some undercarriage maintenance (based on my now infamous hotel scissors tweet!).
For some strange reason I woke after only an hour – I guess the race mentality does strange things to your brain/sleep patterns. So, I was up and out and heading for the required parcours – the climb of Col de Ceyssat. It was damp. In fact, it was raining, so I stopped in a bus shelter and put on my new silver RAB rain jacket (thanks again skinny!). I don’t remember any issues with the climb, just tapped it out on mostly gentle gradient I think. I took photos of some columns at the back of the carpark as instructed by Mike – this would act as proof I’d done the climb in case my tracker wasn’t working properly.
Headed back down and got breakfast at some cafe/bakery. Judging by my tweets at the time, the croque was a little bit on the hot side. 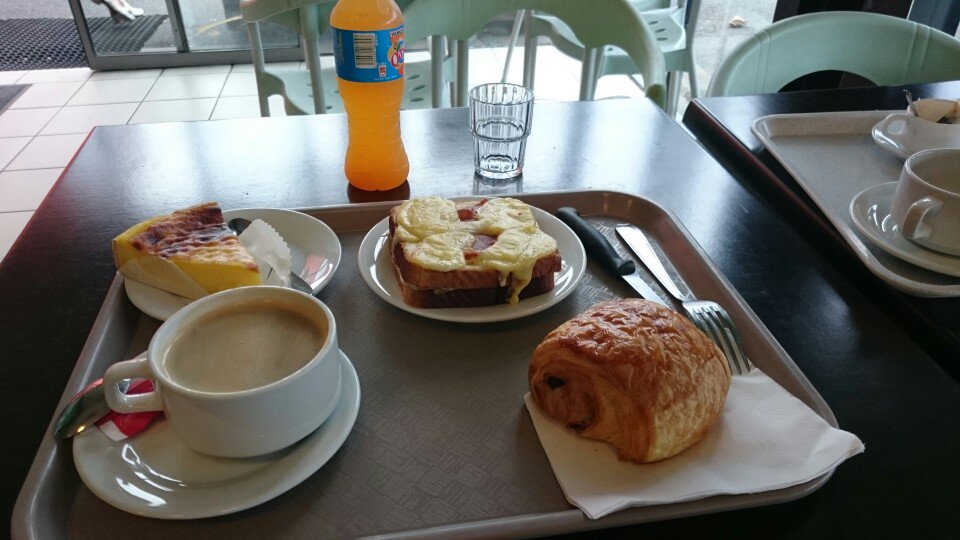 Cruising north east now heading towards CP2 in Switzerland. From memory I quite liked these roads. Nice scenery, little bit of rolling terrain, cooler weather and a feeling of progress. I passed someone filling bottles and lifted the pace to get a gap on them. Of course it was the last town for miles and I then ran out of water because I’m an idiot.
Charolles, Burgundy – my first dot watchers! By complete accident (I missed a turn in a town) I rode down a different route parallel to my plan and on the corner someone was waving me down. It was James Hayden’s father and sister! They were dot watching and had come out to meet riders. How awesome!

I don’t remember much of this section of the route. I do recall some rerouting on meeting some more gravel roads and some long rolling sections that were quite enjoyable if a bit lumpy for a fat man. Finding food and drink in France on a Sunday (or was it Monday?) was a pain – stopped at a food van and they couldn’t even do a cold baguette because it was going to take 30min to cook/heat a baguette loaf! So, basically junk food consumed all day. I was saved for the evening section when I stumbled on a pizza shop window in a small French town – the baker used to work in west London! Saved half in a bag for later. Various bits reminded me of other countries but it was cornfields like you’d see in movies from the USA that stood out.