Rolling up to the front of the Bosnia->Montenegro border crossing queue I ask if there’s food anywhere down the road and the border guard says there’s a petrol station. Through the border and into Montenegro I roll and sure enough a few kilometres down the road is a servo where I do some non-English haggling and swap some foreign currency (Bosnian Marks, I think) with a random selection of food and drink that I point at until the guy says I’m done.

It gets dark and I’m now in a rain jacket heading into a storm. It’s an amazing storm – like the huge 180 degree view we’d get out the back verandah in Mildura but because I’m still up high I’m watching it over some huge mountains. It was so cool I stopped to take video but of course you never get any of the really big lightning strikes on video and it removes all the scale of the event. Just trust me, it was fucking amazing!

Fast forward an hour maybe and I’m less amazed, now I’m soaked, running for shelter under some kind of ledge, wondering where the hell I’m supposed to be going. Two local guys have stopped their car and are under the ledge too. I’m wary, thinking I’m about to get mugged or something, because why the hell did they just get out of a dry car and run through the mud under a ledge?!, but we have a very stilted chat and I show them mine while they show me theirs… I’m talking about phones and GPSs! One of them tells me it’s raining for two days while I show him my GPS and repeat “Ploozeeen”. Eventually they say “ahhh Plooshunay” or similar. Ok, so that’s how it’s pronounced. They can’t believe I’m riding there. Given the conditions, neither can I really, but I had no idea how long it would take and I’d not even considered staying in town. So I plod on. I didn’t know it but lots of other riders had taken a risky  border crossing that saved this big detour – if they didn’t get turned away…

The rain is torrential, the road is swimming, rocks are falling from the sides of the road where it was cut out of the hillside, toads are bouncing across the road, it’s end of days. If you’ve read any of my stories you know I have a habit of attracting ridiculous weather but this was stupid heavy rain and it just didn’t quit, some of the worst I’d ridden in. I didn’t find out until later but there was apparently a month of rain in a day and the resultant floods killed 21 people in Macedonia. I had my headphones in and should’ve put them away but I was too busy trying to get this over and done with. I remember a truck coming the other way and being hit in the face with a HUGE bow wave off it. It hit with enough force to knock the head phones out of my ears. I was having a great time #sarcasm. It seemed to go on forever. I couldn’t even make time up on the descent into town because I couldn’t see the road and every now and then I’d just hit a huge pothole. It wasn’t worth the risk of piling into one at full clip so I nursed it all the way into Pluzine. I was so happy to find the hostel, the promise of a warm shower, a bed (it was now 3am) and some food (I’d been running on empty for a while). Cue horror slow reveal as it dawns on me that the hostel isn’t open, nothing is open. Pluzine is totally dead. No shower, no food, no bed. Shit. I see a note to stamp my brevet card front and back so I do. As I’m doing this a French guy rolls up and I explain the situation to him. We roll around town together looking for anything open – nothing. It becomes clear we either continue or bivvy here somewhere. I get onto the town’s wifi (my Three SIM wasn’t working) and examine the surrounds – nothing nearby. I’m not going to attempt the 40k climbing parcours at 3am with no food or drink and no prospect of getting any food or drink for another x hours so I leave the French guy to find a bivvy spot and wander around some more looking for my own. I see what looks like a slow police chase. Eventually the two cars and the police car reappear, driving back into town quite slowly. I wave down the police car and ask the driver if he knows of any place to stay. I also question the ‘police chase’ I thought was happening but he explains they’re friends and have been at a party. All three guys from the cars are looking at phones and calling people trying to find me a room. How cool are they?! Unfortunately nothing results, but they have an idea and point to a nearby building. “That’s an apartment. It usually has a receptionist but it’s 3:30am so no one will be there. The door will be open though. You can go and sleep in the lobby”. Um, ok, they’ll be ok? “Yeah, just, err, yeah it will be fine”. 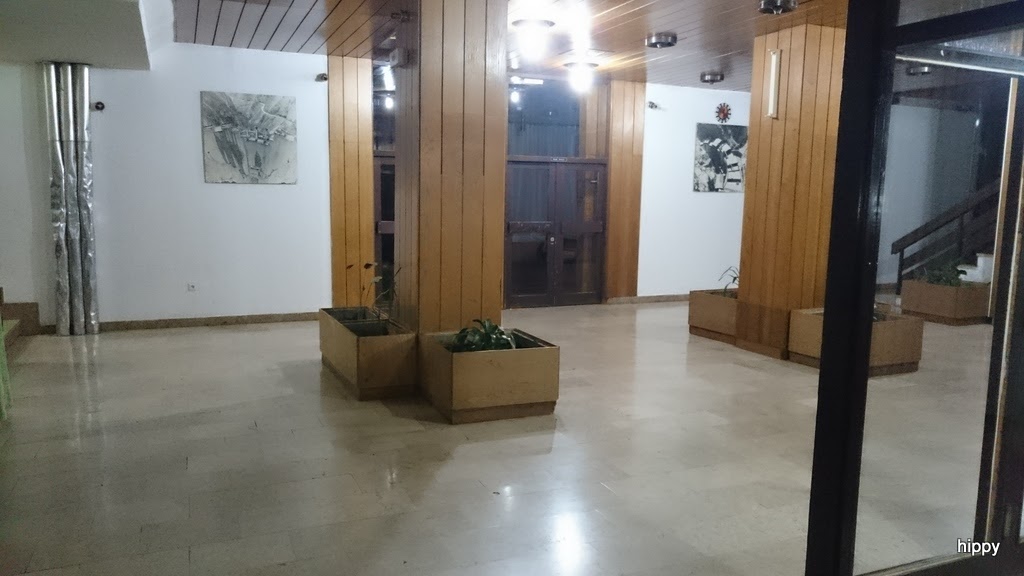 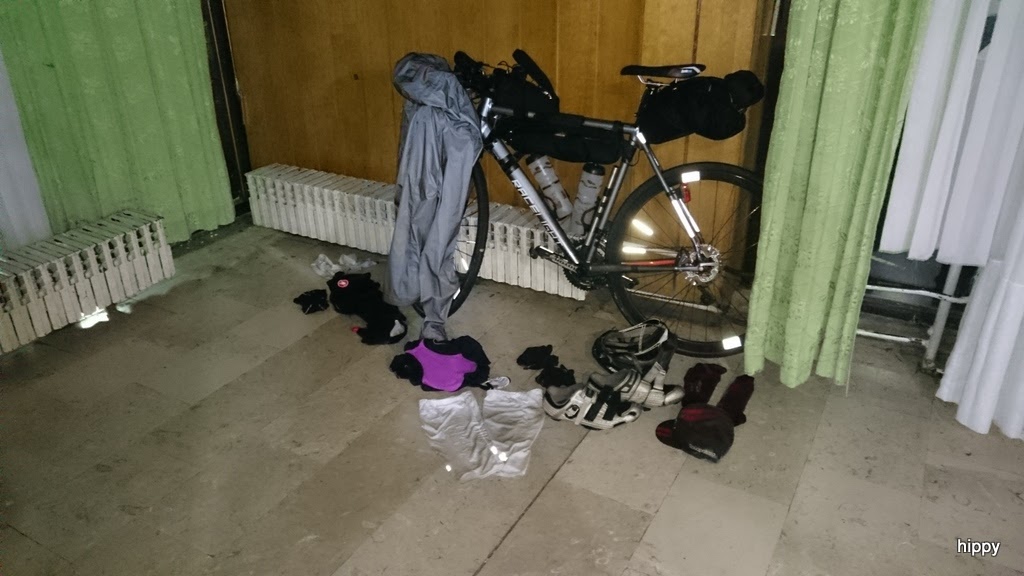 Make yourself at home dude, really!

So, that was my home for a few hours! I found a toilet downstairs so cleaned and dried myself as best I could. I didn’t drink any water – I’m not sure if that was a good idea or not but I remember Paul saying he was on bottled water only for the duration after he got sick during last year’s race. To be honest, I think I’d come into contact with quite enough water for one night!

I woke a little cold a few times but stayed there until the sun was up and I heard the doors open or close. Someone had come or gone so that was my queue to “exit, stage left”. Packed up and by the time I was out to the main road the market was open. My god, I bought everything they had! I sat outside and drank and shoveled glorious food into my face! Made about four trips back into the supermarket to put wrappers and empty bottles into the poor checkout chick’s bin! Crappy pre-packed 7-Day croissants never tasted so good!

After the binge fest I stabbed at the Garmin to load the GPX course for the required Durmitor parcours. Nothing. The SD card in my Garmin was totally blank. FUCK! I pulled opened the rubber rain cover (insert LOL here) and removed a very soggy SD card. Bugger. This is why you: 1. Never trust a Garmin! 2. Always pack more than one GPS. Not only did I have a backup Garmin Etrex hiding in my saddle bag, I also had a spare SD card that would work in the Edge 1000 or the Etrex. There were also two GPS mapping apps on my phone. Firing up the Sony Z3 Compact mobile phone (also IP68 rated but clearly more waterproof than the Garmin Edge 1000) I used RideWithGPS to navigate the parcours, while leaving the Garmin SD slot open to dry out. 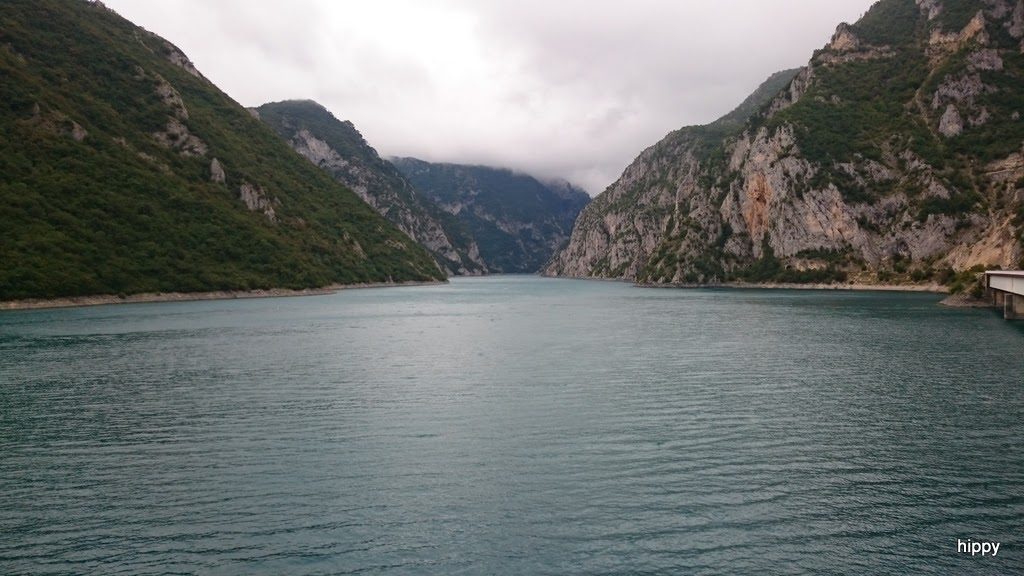 The French guy from last night and another rider were filling up at a service station and we all started the parcours together but they dropped me and disappeared almost immediately – guess they’d eaten last night whereas I was still digesting a kilo of recently inserted food. This 40k parcours was a really slow grind fest. I just looked at Strava – it took me almost 5 hours! 5 hours to ride 40k! Unlike Josh Rea’s ecstatic ride (see youtube), I just remember it being miserable – slow, windy as, with rain coming at me sideways and lashing my face. Sean Kelly would’ve approved. 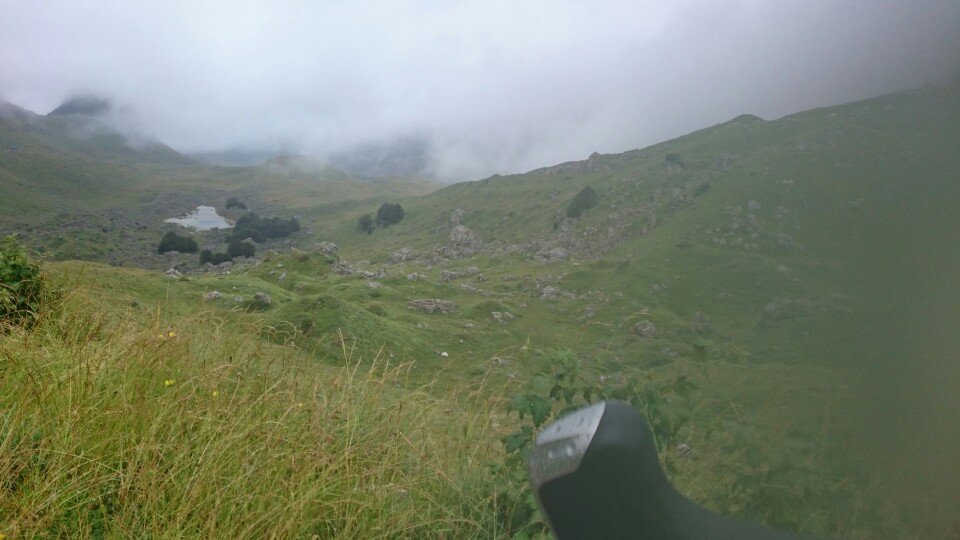 “Anyone else referring to their Chamois cream as ‘my precious ‘? #TCRNo4”

Stopped to put on long finger gloves for the descent and thought I’d test out the Gore overmitts I’d bought along (supposedly for the Alps). They worked alright but I didn’t really need them. Finally saw signs for Zabljak and after stopping to collect Snickers that had been ejected after hitting a pothole, I was at CP4 the Hostel Highlander. I didn’t really know what was going on – Leo was there, someone took photos of my cold, water-shriveled hands, I plugged some stuff in to charge, the lovely owner gave me a towel and a bathroom to shower in and a coffee. I ate something, showered and was going to walk down the street while debating whether or not to stay or go. The weather had eased off and after my warming shower I felt OK again. I decided I would knock off another 120k and ride on to Berane. I should arrive just after dark (although I had contingency if I was later) and would have a sleep in a hotel. Hotel S, to be precise, which I booked from the hostel. 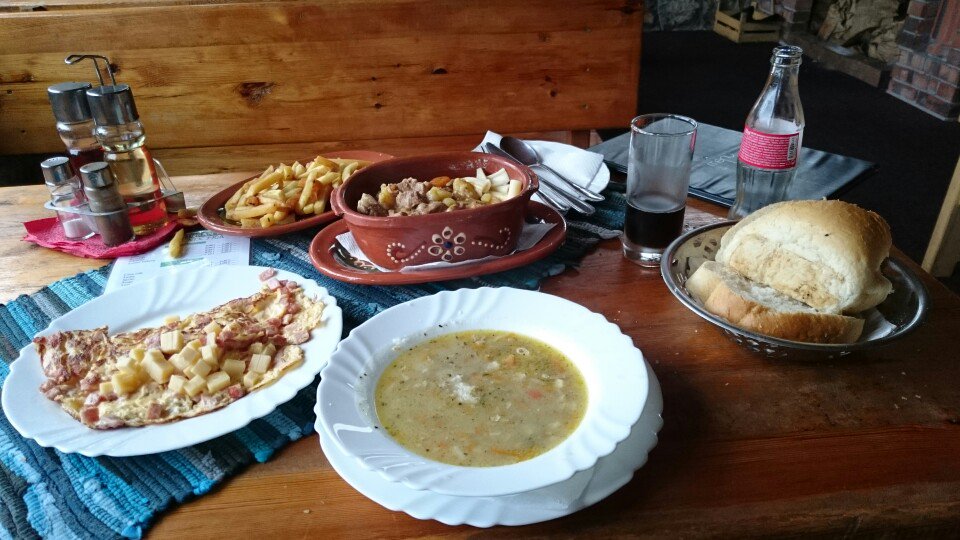 I rode over to a nearby restaurant and pretty much ordered one of everything. I’m clearly starting to get the hang of this multi-day ultra-racing.

Montenegro, when it’s not tipping down with rain is stunning. I enjoyed a long, long descent through misty, lush valleys. It was proper Jurassic Park, Lost World stuff. Really beautiful. 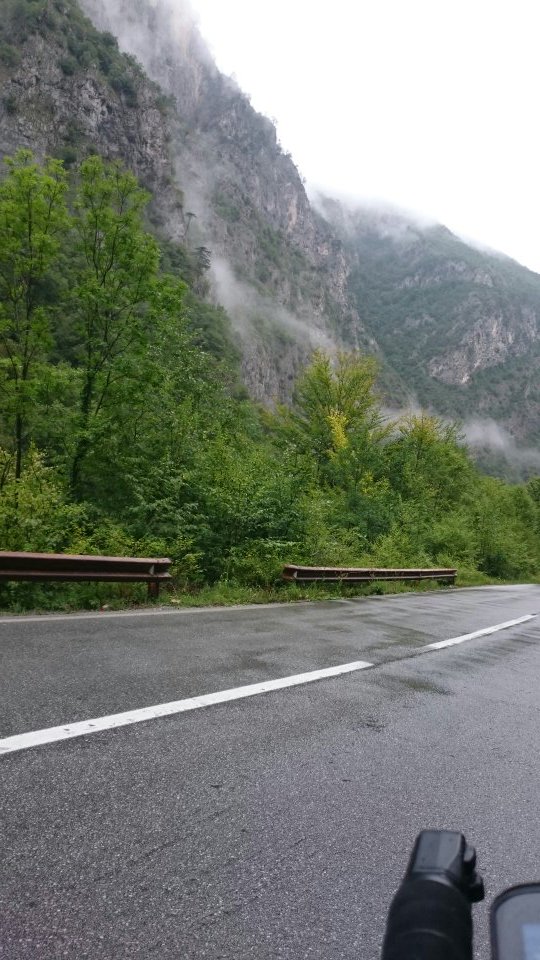 Montenegro is stunning when it’s not raining

With perhaps 30k to go before Berane, the terrible 2-up of 212 crew flew by. James and Andy’s technique was: ‘breakfast, smash it, lunch, smash it, dinner and hotel then repeat’ so they were having a much faster but more sociable time of this than I was as they leap-frogged riders every day. They were staying in the same hotel so when I got in, I showered and then we wandered out for dinner and a couple of brews at a nearby restaurant. Thanks for the company lads! 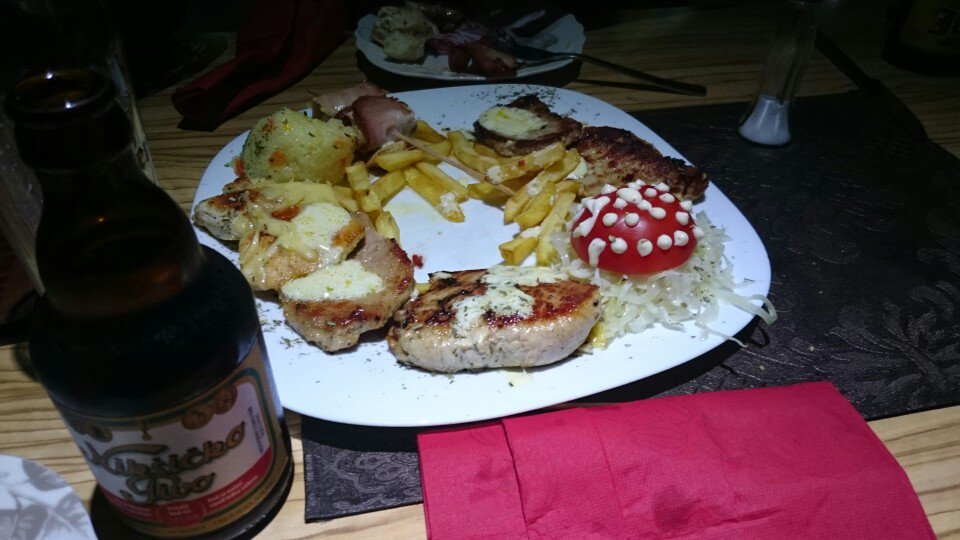 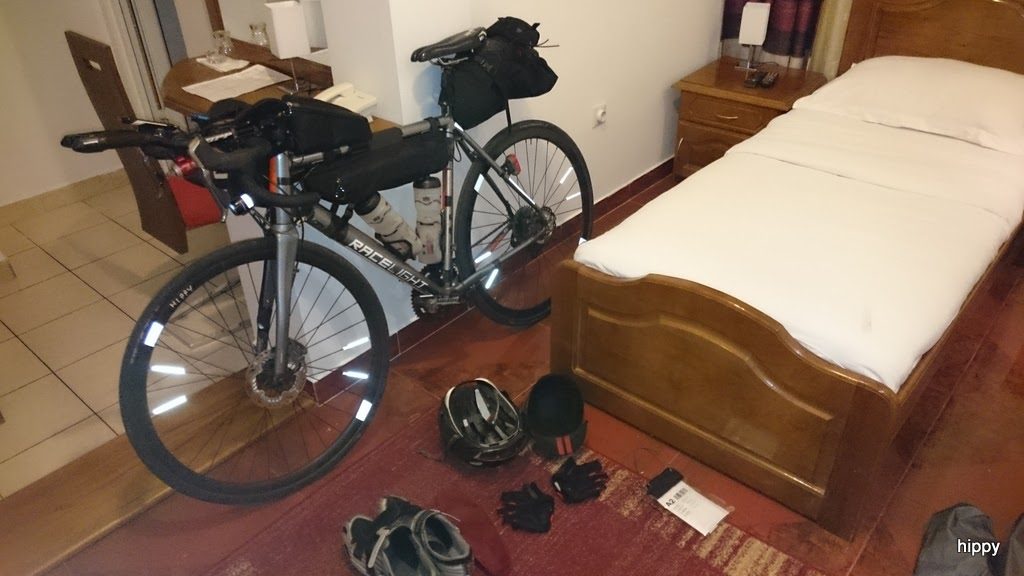 “Hardest couple of days on a bike. #TCRNo4“