Hotel S, Berane, Montenegro, around 6 in the morning I left, saying bye to 212 crew, and rode a few kay down the road before promptly returning to the hotel after realising the manager hadn’t taken any money for the room last night. Doh! He was nowhere to be found so I gave a 50EU note to Andy and he said he’d pay the guy and give me the change when we crossed paths later. But, downstairs again, I worried that this might be considered using ‘outside assistance’ and might be a rule breach so I ran back up the stairs took the money back and then went over the road for coffee and some water and got some change. Leaving a little more Euros than the room rate wrapped around my key on the reception desk I hoped all would be well and finally I left Berane! What a mess!

“Nothing like a gravel climb before breakfast. Thanks again GARMIN. #TCRNo4”

“Gears rough. Cleaned jockey wheel before climb. Weight weenie. Then ate some 7-Day croissants. Not so weight weenie. Made no difference so will clean chain later.”

(It’s now September IRL) A few weeks later and I’m struggling to recall details, at least of this section of the race. Reading my tweets I remember a very long climb into fog. Gnarly, thick fog. Visibility in places must’ve been down to 10s of metres only!

“Another unexpected border! I literally have no idea which country I’m in. #TCRNo4”

After commenting to the border guard about the fog (it’s always like this, apparently) I take the winding descent pretty easy until the vis improves and all of a sudden it’s warmer, clearer and I’m smiling. Be-cause. Down-hiiiiiiiiiillllllll. Experience my first dog ‘attack’ from a little mutt sat in the middle of the road until I got closer and he barks and runs at me. Avoid incident but from now on I’ll pay more attention to them.

“Kosovo likes cars. Wowsers. Worse driving than Montenegro too which is well done. 1st dog to try attack. Lots of dead ones. #TCRNo4”

I seem to be on a constant downhill so I’m quite enjoying Kosovo. The driving is atrocious though with lots of close passes and dodgy overtaking moves. “Sure mate, I don’t mind you aiming your 2000kg weapon at me so you can drive to lunch 10s quicker”. Somewhere on this highway the 212 crew pass me and head off the road. I can’t recall if that was before or after I stop at a roadside cafe for a coffee and a beer… and a crap… and oh why not, I’ll have another coffee. The young kid gave me some jaffa cakes with my coffee which was a nice touch. Calories are king in the world of ultra racing! Free calories are king-er, obviously. 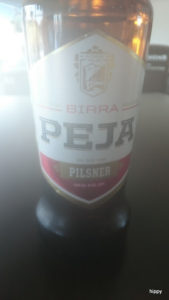 “My rear light was full of water and my phone camera is fogged up but now down low I’m hoping to dry out a bit. Tweeting bcoz WiFi. #TCRNo4”

Resuming, there’s huge tailbacks / traffic jams along the highway. One was caused by a truck that had run off the road and attending emergency services, the other way just a TONNE of traffic in a town, probably because I was nearing another border – Macedonia. The rain I’d copped in Montenegro had caused big floods here (1 month rainfall in 1 day?!) and I guess people were rushing around looking for supplies or trying to get in/out of the country? I can’t imagine it’s like this normally but you never know. Lots of dickheads driving black drug dealer V8 BMWs and Audis with Swiss plates. People suggested it was locals using Swiss plates as a status thing but feel free to correct their opinion on that? 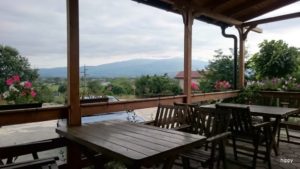 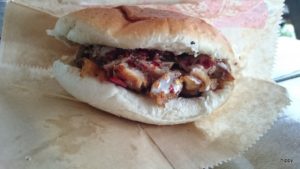 After some circling around, some gravel roads, a near mental meltdown, a dodgy kebab stop and some adjusted mapping I’m breaking through to the other side, specifically Macedonia, via the sketchy E65 highway (which I’d tried to route around after chatting with 2-time racer Ishmael). It’s a fun but dangerous shoulder-free 70kph highway full of trucks doing 100kph 🙂

I vaguely remember riding through a city which must’ve been Skopje and soon after I was in a seeming no-mans-land again. It was crappier roads and small villages. I wanted the fast descents back.

Early evening now and Matthew Falconer’s distinctive kit (with him in it, I wasn’t hallucinating that much!) rode past while I was drinking a beer outside a little shop. Spot the difference in priorities! 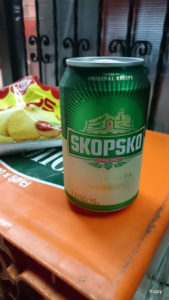 “Totally can’t be arsed with this any more. #slump #TCRNo4”

I was having a shit time of it now, on the crappy concrete of the R1102 getting bashed and bruised and feeling a bit sick. Fed up with everything and clearly annoyed at my lack of progress towards the bunch of riders in front of me, I stopped for a lackluster sit-down meal and mental reset at a hotel restaurant somewhere. Yes, stopping is counter intuitive to chasing people but I was beginning not to care any more. 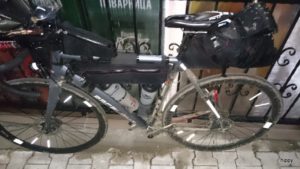 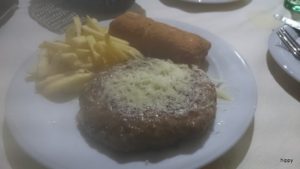 “Slower the restaurant service, the more keen I am to get moving. Typical. Time to neck all my painkillers and ProPlus at once and finish?”

Moving on and I stopped at a service station off a side road in some small town where I sat and ate an ice cream and had a chat with a local bloke who was hanging around with a couple of friends keeping the girl in the servo company. We had a long chat about Macedonia and mafia, corruption, politics, the roads ahead, Greece, travel, etc. and eventually I decided I should probably get moving again.

“Another rider just passed me. Meh. Where did he come from? He left servo before me, had puncture but I didn’t pass him. Are people using this motorway?? dafuq #TCRNo4”

I’m clearly getting frustrated now with people on betters roads than I am, going faster than me. Just when you think it can’t get any worse… the now infamous R1102 / R1105 rocky riverside rumble! The road stopped and turned into a rocky, off-road, access path presumably for the nearby train line. I’m too scared to look at Strava to see how long it took but I was walking a lot, trying not to let my stupid Speedplay cleats fill up with mud or stones. There were puddles of unknown depth across the entire “road” so I was sort of tip-toeing around them through the scrub. It was ridiculous. 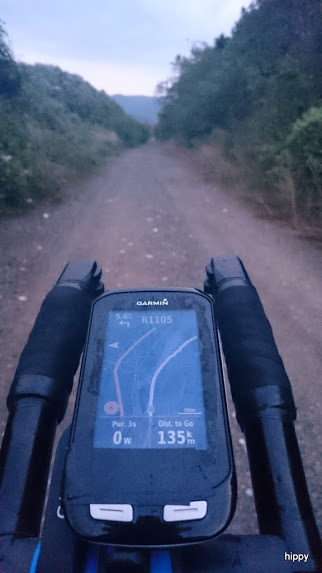 After seemingly hours of slipping and sliding I finally saw tarmac and went mental, screaming at the trail, screaming for joy at seeing a proper road, all of which was looked on with interest by the border police parked up nearby. They asked what I was doing and I said “trying to get the fuck out of here”. I didn’t know they were border police yet and to be honest, when I found out I didn’t care. They asked why I’d ridden past them four hours ago and I said “that wasn’t me, there’s 200 of us in a race towards Turkey”. They asked for my passport, saw the state of me, looked at the state of my bike and I detected some sympathy when they gave me some navigation tips and wished me well on my way. I pulled into a service station further up the road and tried to clean the mud off everything with a bottle I’d scabbed out of a bin. I did the best I could without a mobile pressure washer so at least I wasn’t grinding more paint off the bike and I could now clip in again with clean(er) cleats. Buying a pile of food, the guy serving said one of our lot had camped in the trees “just there” pointing around the side. I guessed it was one of the French riders ahead of me.

“Another couple of hours lost trudging through R1102 riverside quagmire. ‘Road’ race, they said… Was going to ride through to finish but that took so long and I’m so covered in grit I’ll prob try find hotel.”

“Bailing. Too dangerous. Need sleep and everything needs clean before ground to pulp.” 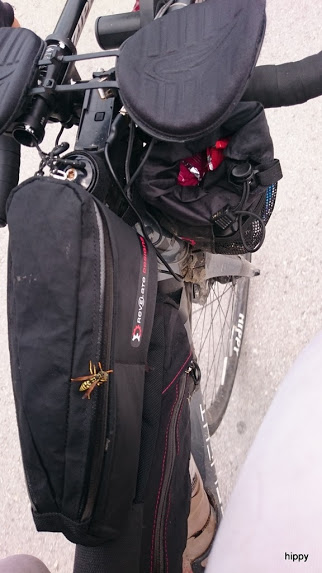 I’m am the passenger, I ride and I ride

“Got half day hotel near lake something. Near Greek border. Shower sleep resume. Might still make 12 day goal. 10 was always a stretch.”

“Clearly underestimated the cumulative sleep dep and fatigue. Barely made it 25hrs of grovelling. Learning a lot though. #TCRNo4”

My grand plan to ride through to the finish without sleep had the wheels come off very rapidly. I guess I’d already pushed myself too far and found my sleep deprivation limits now. I just couldn’t keep my eyes upon so I rerouted and headed towards Lake Dojran, where there was a town with at least one hotel. I was being chaffed by grit in my shorts so justified the shower and sleep quite easily. The first hotel I tried appeared empty but after waiting 5 minutes had no room for me. The second hotel, Hotel Macedonia, was similar. Initially the girl on the desk said no rooms were available (even though the place looked empty) but I basically wasn’t going to take no for an answer so kept talking at her until she called another woman down. This woman spoke more English, in fact she wouldn’t shut up! 🙂 We made a deal for a room and I was about ready to head up when she had a brilliant idea and went off talking for another 5 minutes. “Do you need TV?” “No.” “Do you need aircon?” “No.” “Do you need a double bed?” “No.” “We have a room without a TV, without aircon and without a double bed. Perhaps you can use this room and we can make the price…” The calculator comes out again and she tells me a price that’s maybe half of the “very expensive” price I’ve already paid for the double room. She talks and talks about it and unrelated stuff and in the end we swap some local bank notes and I think I’ve paid the equivalent of 10 Euros for a small room. So long as it had a shower and bed I didn’t care. More talking from her.  I think about getting the guy washing the hotel’s front porch to hose my bike down but worry about him washing any remaining grease out of the BB so decide against it. The bike goes into an empty dining room downstairs (for once I couldn’t be bothered arguing about it going in the room) and I go upstairs to shower and sleep.