The trickiest part of the build today was running the cables and tuning the gears. I don’t do either of these tasks much so it took a while. I also seem to have a tendency to run the cables the wrong way around so derailers don’t sit properly, or leave grommets out so I have to remove and reinstall a cable four times before I get it right.. another plus for singlespeeds.. shuddup! 😉

Once all the gears were on and tuned and the brakes worked, I swapped the old front wheel for the new one and swapped the reflective Vredestein tyres off my Avanti for the original (worn) slicks. Took the bike for a spin.. COOL!! This thing rides super nimble and the gears and brakes are SMOOOOOOOOOTH! What a beast – GT had this (cheap, remember?) frame dialled to my spec’s or something when they built it.. it’s frickin’ AWESOME!

Back inside, I spaced out the brakes and shifters properly (decided to stay with the 670mm riser bar rather than go for skinnier flat bars) and fitted the Ritchey WCS foam grips. Well, actually Quentin fitted the grips – and suffered great pain doing so! The grips were sprayed with metho to help them slip on, and slip on they did, squashing poor Q’s finger under the shift lever. Oops! Thanks for drawing blood for my bike man!

To spoil the bike’s subtle grey on grey looks.. I fit the Axiom rack. I hate racks! But, I’m not carrying everything around Europe in a backpack so a rack is necessary. Used some longer brackets than the ones I had (black too) so the rack could be pushed back further. Another test ride.. schweet! This thing rawks! I like this more than the Avanti I think.. maybe I should take the Avanti and leave this one behind safely locked up? 😛

Have some SKS guards here that look like they might fit, so she’ll look even more daggy soon.. 🙂 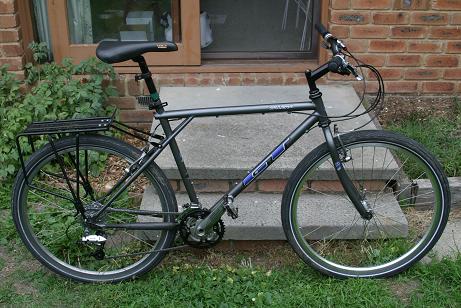 Three cheers for the flyingdutch man!

He’s shown me the light.. I can see now that there IS an advantage to marriage and even benefits associated with having children..

“What are the benefits?” you ask. Well, FD wouldn’t have a 1-man tent to part with if he was single hahaha! 😛

My home, when not hostelling in Europe, will be this 1.8kg Macpac Microlight tent. In return FD gets my Miche track crankset which ‘was’ going into storage. 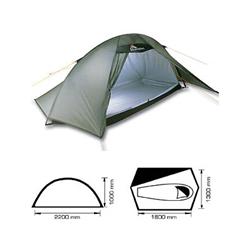 Also, thanks FD for the loan of the three-bike tow-ball carrier so I can cart even more junk home in one trip! 😀

I had one of these in Japan, but had dismissed it for this trip because I was taking my bike.

aus.bicycle’s SteveA suggested it to me again and I thought about it – it’s only $27AUD and it means I can drive around if I need to.

If I hire a car or if I need some other form of ID, it could come in handy. So I went down to RACV with a (VERY DODGY LOOKING!) passport-sized photo and got myself an IDP.

I ended up going to Mountain Designs in Hawthorn with Carlos and picked up the following:

or about the cost of the sleeping bag alone from Kathmandu 🙂

Now I’m just worried about my cheap panniers and their ability to keep out the water which I will inevitably have to ride through.. Down bags taking forever to dry once wet, I’m told. I’m going to check out some plastic liners or water-proof stuff sacks from Canoe stores.. probably take some garbage bags and smaller zip-lock bags too, just for backups.

flyingdutch is keen to swap his Macpac 1-man tent for my track crankset so it looks like the tent vs. bivvy bag question has been answered.

Thanks for your help Carl!! Plug, plug, plug: www.aboc.com.au

Less than a month to go before departure..

I had issues with how to get a UK account. STA no longer offers it due to some legal hassle with ANZ and going through Travelx or HSBC require a 1500UKP ($4000AUD) deposit!

Tezz had told me about 1st Contact ages ago and I applied for their starter kit, but I messed up when I read the email they sent. Anyway, I called them and it turned out to be all cool, so I trained into the city today, paid my $75 and came away with the promise of a UK bank account when I arrive and a useful London guide.

No minimum deposit is required, no permanent UK address either and it’s cheaper than HSBC ($115). All I need to do is get mates who I’m staying with to fill out a form telling the banks that I’m staying with them, go to a 1st Contact meeting and get my account! Easy Peasy!

Finally handed in the keys to work too.. 🙂

Had a discussion with the dude in the print cartridge shop in Hawthorn. He’s going to Paris for 2 weeks to write “quirky” travel stories. He’s been commissioned to do so!! I want his job!

I handed in my notice last week and will be finishing up here on April the 5th. Damn! I was only 10 years away from Long Service Leave! 😉

I’m currently trying to get rid of 25 years of accumulated crap – I’m a total hoarder – can’t throw anything away!

I’m also “planning” some form of cycle tour in Europe somewhere.. The term ‘plan’ is not entirely accurate as it looks like I’m going to end up with a lot of ideas and not much of a clue about anything. I’ve never toured before so I figure I should make my first attempt in a bunch of foreign countries, while I have no job, limited cash, no foreign language skills, no idea at all, in fact, of what I’m doing. Sweet!

So far it looks like I will take the GT (fitted with gears.. I’m a wuss.. shutup!), with panniers for a couple of changes of clothes, small camera, money, maps, a little food. bikesoiler showed me his SPD shoes which look like normal hiking boots but have SPD cleats fitted to them – they would be cool in that I could get away with only taking one pair of shoes for everything. I’ve got to sort out clothing. I only have race gear – nothing remoately passable for normal casual wear and not much warm stuff for the European cold.

“As an example of Europe’s abnormal colder-than-cold cold-snap, on Monday, the daytime/night-time temperature range for Brussels was 0 degrees and -4 at night. Meanwhile, way down in balmy Mawson, one of the largest bases on the Antarctic mainland, they also had a daytime maximum of zero, but at night it was only -3.“

My vague ‘plan’ at this stage is to fly into London, leave some gear with friends, ride from London to Dover, ferry to France, ride north over the edge of France, north through Belgium and explore the Netherlands. If I’m still alive at this stage, ‘sybaritic’, one of the posters on Lonely Planet’s Thorn Tree bike touring forum, suggested:

“You could ride from London, south to dover, cross the channel to northern france, ride east through belgium, netherlands, northern germany (inland as far as berlin if u want, or along the coast), northern poland (incl warsaw if u fancy), through the baltic states lithuania, latvia and estonia, on to russia (st petersburg), through south finland and helsinki, ferry to south sweden (stockholm etc), ferry to denmark (copenhagen etc) back to northern holland for the ferry to hull then south through eastern england back to london.“

I think I’ll play it by ear when I get there. Knowing my navigation skills, I’ll probably spend the first week, just trying to get out of London.. 🙂

Originally booked for April 30th, I saw Ralf at STA Hawthorn again and asked for May 18th instead. Then I checked my diary and found the folks actually get back from WA early APRIL, not May, so I changed the flight to April 18th. Then a new Malaysian Air flight came about which was ~$150 cheaper and flew direct to London via KL. Getting wasted in Amsterdam will obviously have to wait!

So, I’m thinking I will dump my stuff (looks with sad, pleading, puppy-eyes towards Grant, Sheila n Tezz.. 😉 ) in London and then ride over to the Netherlands and bike tour there, Belgium, France, etc.. and then come back to face the music in Pomania..

Ant: meet me at Schtipol! I’ll be there after how ever many days it takes to ride there from London 🙂