16th place. This was grim. The day after PBing 10mi I was broken. Everything was tight and my left leg numbness came back hard so I was sitting up for a lot of the race. I thought I was way off the pace and had basically given up but then did some calculations and thought a PB might still be possible. I really upped the pace and got very close, only 30s down on my PB in Wales late last year but it wasn’t enough. Lesson learned – no 10s the day before. In happier news, Daniel, the organiser came good on his promise for a free bit of cake if I broke my course record. Since the last time I rode this was the day after a 100mi TT and my time was over 2hrs, I was pretty much guaranteed cake this time around! 🙂

13th place in a quick 10, not too shabby. PB by ~30s too, even if the conditions were sub-optimal (windy) and everyone went faster on the Tring course earlier in the day.

Extremely wet but it was a 3hr drive to the start of this R25/3H “cheat course” so I figured I best ride it anyway to at least see what the fuss was about and learn the course for a better day. Annoyed I didn’t do sub-50 (combination of taking it too easy due to wet roads on an unknown course and my valve cover came off causing a weird noise where I thought I’d broken something) but should be happy with my second fastest 25mi ride ever – 51:17 (11th place).

Finally got back to this course to kill those 4 seconds in the face. I managed that easily but was still almost 5 min down on my new 25mi PB set last week on the E2/25. It was very cold today and there was far less traffic here than the E2 course. Even so, Andy Halliday said most riders were about 3min down on last week’s E2/25 race – I managed to be a whole 2 minutes extra shit on top of that! I think doing a bunch of gym work early morning Friday and then going clubbing that night until 5am (Hardfloor rocked the 303s btw!) was detrimental to my performance. “Oh, you think?!”

Anyway, long and short of it is – I won’t be doing any gym work close to an event I care about (or drinking my own bodyweight in beer) and I never have to ride the H25/2 course again. 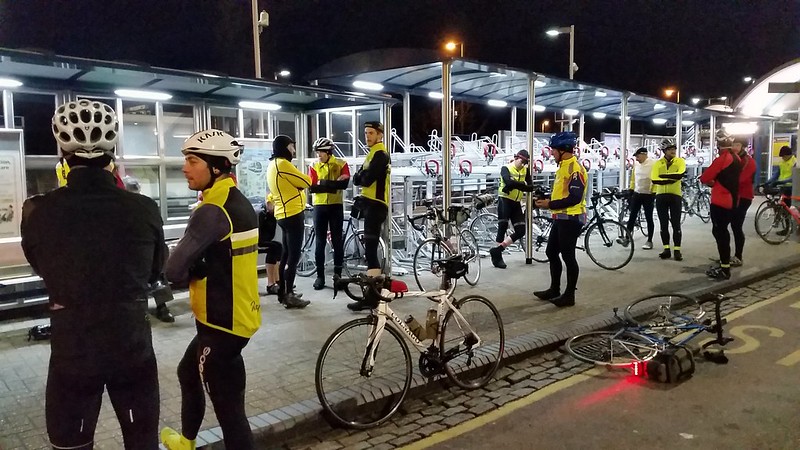 2am start, followed by some stupidly hilly riding down south. Thanks to thesloth and the SWRC guys for taking my mind of the relentless lumps. thesloth took some pics from the event.

35:43 (course and distance PB having never ridden a 15 mile before, potential club record since none is listed on the Willesden CC site for Men’s 15 mile)

Wasn’t taking this particularly seriously so I rode out to it – really just wanted to finish to set a club record for 15 mile and test the new Pro Missile stem I’d installed.

It was very cold and I was a bit worried that in just a skinsuit I might have another wheezing asthma attack thing like I did at the Worlds last year. That didn’t happen, thankfully. Maybe the preventer they’ve put me on is working?

Once again I thought my pacing was a bit off but it turns out I was pretty decent 1.01 VI with some baulks at turns and slowing for some horses – plus some silly spikes when passing people and on some hills, but it was a technical circuit so this kind of thing is expected.

Actually made the same power over the 15 miles as I did setting my PB over 10 last year so perhaps I need to hit next week’s 10 a bit harder than I’d planned. Cue: snotty mess blowing up at 7 miles…

Left leg went numb again – really need to work out how to fix this!

Thought I’d enter a sporting 10 to spice up an otherwise dull, 7hr training ride. I’d entered the road bike event and wasn’t taking it too seriously but left the 404s on the Tarmac and I arrived early enough that I bothered to take off all my audax-esque saddle packs and bottles.

It was freezing and the ride out took a bit longer than expected because of some interesting choices the Garmin made in combination with the largely ignored RideWithGPS route I’d planned. No, I don’t want to ride down muddy cycle paths but equally, did you have to route me down the bloody A3, only to turn up a hill and head backwards?! Sigh, will I ever come to terms with GPS tech?

The race itself went basically as expected. Although being told to take it easy on the way out I only have listened so that when I turned around into the headwind AND the long ass climb I was regretting not going a little easier. I thought I’d be caught by the rider(s) behind but I guess they did the same as me so I wasn’t caught and finished, probably with a bit left in the tank on 27:21. Rode back to the HQ for coffee, cake and presentations and then rode home – bit quicker with the tailwind back and quieter roads thanks to letting the Garmin do all the navigation rather than following RideWithGPS route and its stupid off road trails.

It seems each time I travel to the US to race the World 24hr TT Champs I come back with a different illness. This time I managed to avoid DVT but seem to have had some kind of asthma attack.

Shortish version of the race report is: it got very cold at night (I saw 3degC, someone else said -2degC) and I was only wearing a skinsuit in order to be competitive against Baloh. Around the 7hr point, I suffered some kind of asthma thing – wheezing, coughing, short of breathe – and if you can’t breathe you can’t ride. I couldn’t continue so dived into the car, cranked up the heating and put ALL my clothes on until my breathing got less raspy and I could take in a full lungful. I went back out and half a lap in, I couldn’t breathe properly again – even being covered in layers of clothes. That was it, my race was done. Back into the car and wheezed until I fell asleep. There was an idea of continuing at 10am when it would be much warmer but there were three guys still riding very strong and it seemed like a waste of time to start riding again for 11-12hrs just to get, say, 5th place. I was here to win, not fill minor places. So I officially quit the race, got some breakfast, packed up the bike and watched the remainder of the race.

We then had a lovely week in California driving from San Diego up to Santa Barbara then San Luis-Obispo via Solvang and a wine route Foxen Canyon road,  beautiful Big Sur and then flew out of San Francisco.

Shit race, great holiday. I’ve since been tested by my GP and have a poorer lung flow rate than my ‘proper’ asthmatic friend! Now I’ve been told I have to carry a little blue inhaler on all my rides and have to maintain a prescription for a preventer inhaler. Maybe all that crappy London air has finally started to kill me? Still haven’t got the tests back for my DVT since they lost the first lot! Bloody hell, falling apart…

Oh, as expected, Marko Baloh won the race but only managed just over 500 miles, where I was expecting a 520-530 mile ride, especially given there was almost no wind, compared to the year before when you could barely hang onto the bike! Maybe he also suffered from the cold? Meurig did well this year, adding another 10mi to his distance.

This course was very fast so I had a good chance and in the end managed to knock about 4 minutes off the old record. Right at the start the Garmin 810 stopped as so as I got the GO! so I frantically rebooted it.  It’s since gone back to Garmin for a refund. Avoid!

My left leg lost circulation again and I messed up some of the turns, especially the last, sharp left-hander where I thought I was finished but still had to climb up the ramp! Doh!

If it was a 25mi event I would’ve got the 25mi club record too so now that is on the cards for 2016. Nice end to an interesting season – might have to race it again in 2016 to bring it below the hour.